Home » Cancer » A Genetic Identity Crisis: Mosaicism in the Brain 

A Genetic Identity Crisis: Mosaicism in the Brain 

We carry with us every day trillions of copies of one of the best stories ever written: the human genome. Carefully drafted and edited over 4 billion years, our genome contains all the information necessary, and then some, for making a human being from scratch. Often we think of this recipe book as a monolith: fixed at birth, specific to ourselves, and unchanging. With the rise of genetic services and sequencing, we can catch a glimpse of our genome with a swab of saliva and assume that the information from our cheek cells is shared with every other cell in our body. However, biology is often not so simple – as we have gained increasing resolution into human genomes, researchers have begun advancing the fascinating field of genetic mosaicism. Genetic mosaicism is the concept that there are individual genetic differences between different cells in the body. Often in intro biology classes we are taught that we inherit half the genome from each of our parents and this new combination is fixed in each cell of our body for the rest of our lives, but researchers have discovered a surprising abundance of mechanisms that can change the genomes of our cells, sometimes with profound functional consequences. Interestingly, the organ in humans that appears to have the highest rates of genomic mosaicism is the brain, and this mosaicism is implicated in everything from neurodegeneration to individuality. Here, we will discuss the state of genomic mosaicism in humans and how an internal identity crisis in our cells drives development, disease, and maybe even our own dispositions.

The smallest form of genetic variations that can occur are known as single nucleotide variants (SNVs). As the name suggests, SNVs are changes in one of the four letters of the genome (an A,C,T or G) to another. Because they are such a small change and can be present in a single or small population of neurons, SNVs are among the most challenging variants to call accurately and investigators are still debating their prevalence in individual cells. Depending on the method used, scientists believe that individual neurons have anywhere from 800-2000 SNVs, with 80% of these a change from a C to a T [1]. Some SNVs happen early in our life during development and can impact large numbers of cells in the brain, but it seems that the aging process also causes SNVs in human neurons. Since neurons are a non-dividing cell type and will never have to replicate their genome, their genetic code undergoes a different type of “surveillance” than dividing cells. As opposed to dividing cells, neuron SNVs tend to be enriched in exons (parts of the gene that code for protein) and mostly occur in neuron specific genes [2]. All this evidence suggests that simply the use of these genes by neurons itself is driving these mutations. So much like a heavily used tool will get wear and tear over time, so do the genes our neurons rely on to perform their daily functions. Unfortunately, just as tools don’t work as well after many years of getting tossed around and beat up, it seems like this same process happens to the genes neurons rely on, and age-related SNVs are thought to drive dysfunction and be a source of cognitive decline late in life. 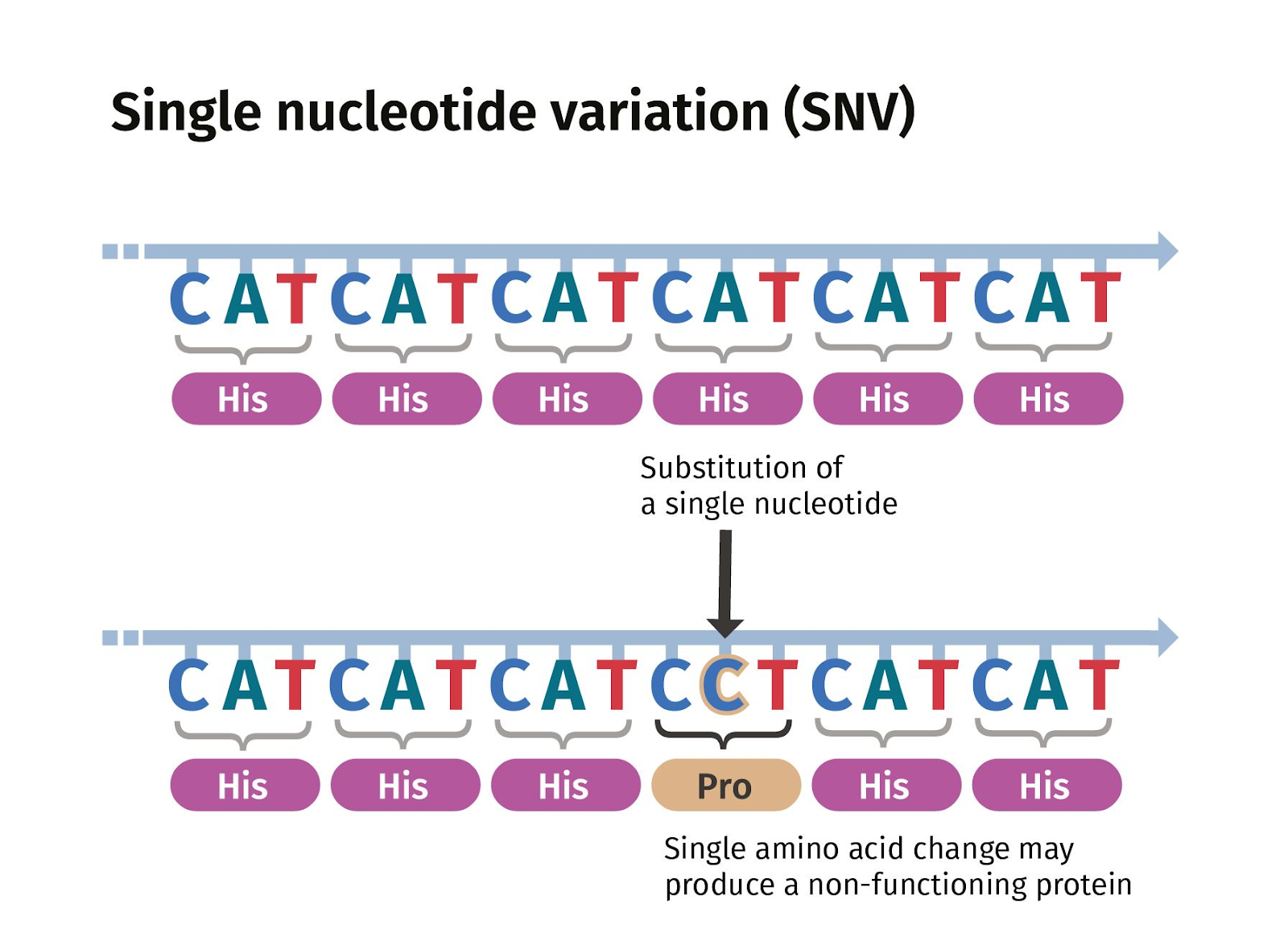 Genes so Nice They Have Them Twice: Copy Number Variations

As opposed to the small, single letter changes caused by SNVs, copy number variations (CNVs) are among the largest genetic changes that can cause mosaics. In CNVs, there are large duplications of whole sections of the genome that cause an increase in the copy number of a particular gene. Throughout our evolutionary history there have been many such duplication events, even times when the entire genome has been duplicated [3]! CNVs can have a major impact on the biology of neurons and are widely implicated in neurodevelopmental or neurodegenerative disorders. One of the most famous examples is Amyotrophic Lateral Sclerosis (ALS), a motor neuron disease that causes progressive loss of muscle function. The most common cause of ALS is the expansion of a repetitive DNA sequence in the gene C9orf72, with increased repeats associated with worse outcomes in patients. These duplications tend to happen early in life, and consequently are inherited by a large number of cells in the brain. In addition to mosaics of the repeat expansions, there are many reports of other CNVs in ALS patients with duplications of the genes involved in protein aggregation and axonal transport. CNVs have also been reported in duplication of genes in Parkinson’s, Alzheimer’s, and spinal muscular atrophy (SMA) [4]. The importance of these observations continue to be debated by scientists. Since CNVs often affect only a small number of neurons or are absent from some individuals who get the disease, their necessity for disease progression is still being evaluated. 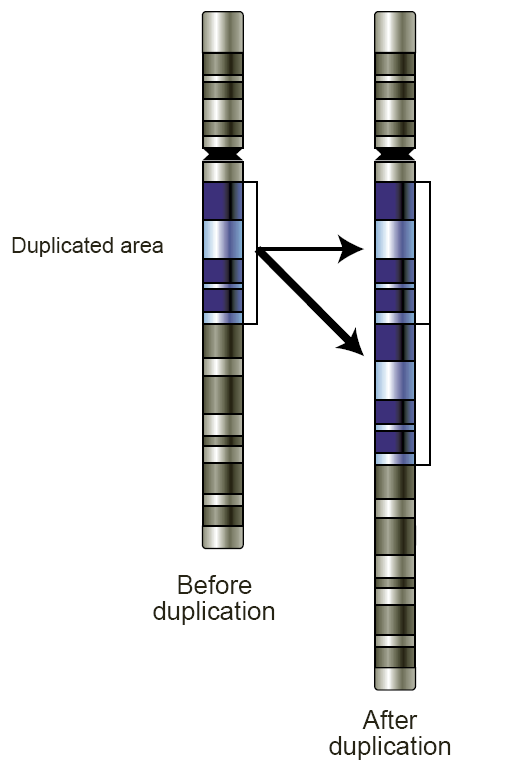 Your Mom and Dad’s Transposons: Retrotransposons

One of the most interesting sources of mosaicism comes from pieces of mobile DNA called “retrotransposable elements”, or transposons. Transposons are bits of parasitic DNA that have the ability to copy and paste themselves throughout the genome. Transposons got into our genomes from a variety of ancient viral infections that became fixed in humans, and they now live out their evolutionary lives within our code instead of spreading between individuals through viral particles. Although originally considered junk DNA and just an unfortunate byproduct of hosting a genetic parasite for millions of years, it seems that the human genome has adapted quite well to transposons and has co-opted them for a variety of important cellular functions. The most prominent class of transposons in humans are the long interspersed nuclear elements (LINE1s) that contain all the necessary proteins to complete the full lifecycle of copy and pasting themselves throughout the genome. This copy and paste mechanism isn’t perfect, however, and sometimes LINE1 will duplicate nearby portions of the genome in addition to itself. These accidentally copied regions can be huge and include entire genes or regulatory regions in the genome. Recently, scientists have discovered that neurons have higher transposon activity than any other cell type in humans (except sperm and egg cells where the real evolutionary showdown is happening) [5]. Despite several groups observing transposon mediated mosaicism, the exact reason for this higher transposon activity in neurons is still a matter of intense debate. Humans in particular seem to have higher levels of LINE1 activity than our closest ancestors, and some of the human-specific LINE1 elements play important functional roles in activating gene expression in neural stem cells [6]. It appears that transposons have important functions in neurons outside of their copy and paste mechanism, and have been “domesticated” by neurons to perform important functions related to synaptic development and signaling during development [7]. 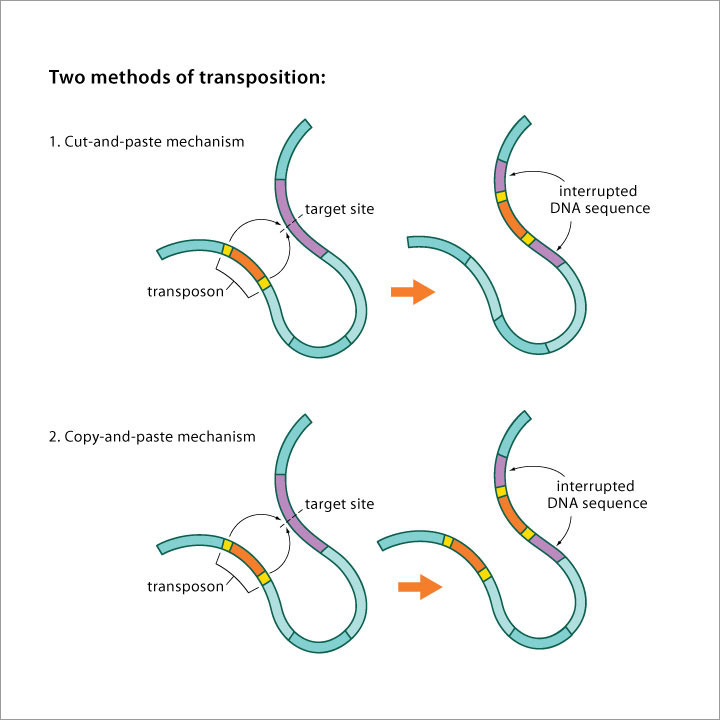 Given what’s written above, it would seem that genetic mosaicism is generally detrimental. Indeed, there are many disorders associated with the brain and other tissues in the body where genetic changes are directly to blame. However, there is a school of thought that suggests that this internal variation can actually be beneficial in many cases. One of the most interesting claims is that mosaicism contributes directly to our individual personalities. If our brain development is hard wired into our DNA, could changes in the DNA of stem cells during development cause differences between how regions of the brain are connected? For example, there are several cases of identical twins where one develops schizophrenia but the other doesn’t [8]. If these two individuals have the exact same genetic background and similar lifestyle by living in the same household, why did one develop schizophrenia but the other didn’t? Interestingly, population studies of such twin pairs revealed that the individuals who developed the neurological disorders tend to have higher levels of genetic mosaicism than their siblings [9,10]. This isn’t limited to neurological disorders either. Cancer, another disease highly associated with higher levels of mutations, is also more prevalent in people with a higher genetic mosaicism [11]. It therefore seems like the brain is particularly prone to producing genetic mosaics. However, in most of these cases, scientists only get to see the extremes, that is, changes that are severe enough to cause disease and be evaluated clinically. It is entirely plausible that more subtle changes caused by variations in our genetics could change our personality and behavior while we remain oblivious to the underlying genomic mosaics that drive such changes. Mosaicism can change neuron branching and behavior in mice, suggesting similar processes could occur in humans [12]. Ultimately, we are in the early stages of understanding genomic mosaicism in the brain. Currently, the field is struggling with the challenging technical details of accurately identifying and measuring mosaicism, but as technology improves it will be exciting to see to what extent changes in our code affect our health and individualism.

← Breathe in the Benefits: Hyperbaric Oxygen for PTSD The Forgotten: →