Posted by megkirch on September 20, 2018 in Cancer, Politics, Uncategorized | Leave a comment

On August 25th, I received a news notification on my phone that Arizona Senator John McCain had passed away, just one day after halting treatment for glioblastoma and little more than one year after diagnosis. I was taken aback. I’d known this was coming, but not that it would happen so quickly. Moreover, the sorrow I felt reflected the sentiment that my senator had passed away, even though I had moved away from Arizona years ago and, frankly, disagreed with most of his politics. After all, John McCain was my senator for my whole childhood, the first presidential nominee I ever voted against, and one of the last politicians I disagreed with politically but nonetheless genuinely respected. Especially after having shown such internal strength as a prisoner of war in Vietnam and throughout the rest of his life, it seemed a cruel irony that what ultimately killed him was a malignant mass of “maverick” cells growing in his brain.

This isn’t the first time that glioblastoma has made political news in recent years. In May 2015, then-Vice President Joe Biden’s 46-year-old son, Beau Biden, also died from this same type of brain cancer. As did former Massachusetts senator Ted Kennedy, exactly nine years ago to the day of McCain’s death.

But while glioblastoma has made quite a name for itself in the political sphere, it should not be mistaken as a rare brain condition that exclusively preys on politicians. On the contrary, it is among the most common and aggressive forms of brain cancer with an incidence of 2-3 new diagnoses per 100,000 individuals each year [1] and yielding a median prognosis of merely 11-15 months [2]. It’s one of the grimmest diagnoses one can receive, but why is it so deadly? How was it able to take down Senator John McCain – torture survivor and war hero – in just over a year, and why was there so little hope of his recovery from the moment of his diagnosis?

These questions led me – like many others, I’m sure – to type “glioblastoma” into Google in hopes of gaining some enhanced understanding of the disease beyond just glioblastoma=brain cancer. But while a cursory search yielded fairly straightforward descriptions of glioblastoma biology, as I dug deeper, things became considerably murkier. As it turns out, glioblastoma is much less well understood than I had presumed, and many critical questions persist that have significant implications for developing improved future treatments.

First, let’s get our terminology straight. A tumor arises when a cell goes rogue and starts dividing too much, forming a growth of abnormal cells. It is considered malignant, or cancerous, if it continues to grow and poses a threat to its surroundings. While there are many different types of brain tumors, gliomas account for about 30% of all brain tumors and 80% of malignant brain tumors [3]. And, since subcategories are seemingly unending in biology, gliomas are further divided into multiple subclasses, the largest of which are astrocytomas and oligodendrogliomas.

Glioblastoma within a simplified schematic of brain tumor classifications. For simplicity, classifications that are not discussed in this article are left out.

Glioblastoma (official name glioblastoma multiforme) is the most severe type of astrocytoma, identified by the appearance of rampant cell death (necrosis), abnormal appearance, rapid proliferation, and the formation of new blood vessels [4]. Not only is glioblastoma the most aggressive brain tumor, but it’s also among the most common, accounting for about 15% of all brain tumors and over half of all gliomas [3]. Within glioblastoma, tumors are categorized as either originating directly in the brain (“primary”) or starting elsewhere in the body and spreading to the brain (“secondary” or “metastatic”). Primary glioblastoma, the kind that took the life of John McCain, is by far the most prevalent and is particularly common in older individuals (median age 62 years), whereas secondary glioblastoma mainly manifests in younger adults (median age 44 years) [5].

While these different tumor classifications may sound like a lot of complicated scientific jargon, they are less intimidating when you know the story behind their names. For instance, the name “glioma” comes from “glia”, which are the helper cells of the central nervous system that play critical roles in the formation and maintenance of connections between neurons, clean up the debris in the event of injury, regulate blood flow to their neuron neighbors, and much more. Similarly, the names for “astrocytoma” and “oligodendroglioma” are inspired by two major types of glia: oligodendrocytes and astrocytes.

What cells give rise to glioblastoma?

Astrocytomas (including glioblastoma), were named for their structural and molecular similarity to astrocytes, the star-shaped cells of the nervous system that are characterized by their long, tendril-like processes that envelop synapses (the points of communication between neurons) [6]. This is part of what makes glioblastoma so bad; because of their astrocyte-like nature, they are deeply entwined with the local neural tissue, making full removal virtually impossible [7]. Because of these distinct similarities, and because we used to think that astrocytes were the only brain cells that were capable of dividing during adulthood, it was believed for a long time that astrocytomas arose from astrocytes that regressed to an immature state (“dedifferentiated”) [8].

However, we now know that neural stem cells – cells that are capable of dividing into many different types of cells – are present in multiple regions of the adult brain [8]. This threw a wrench in what had been a fairly straightforward story, and this wrench continues to ricochet back and forth to this day. In fact, scientists still haven’t reached a consensus about which cells give rise to glioblastoma and other gliomas, but neural stem cells have emerged as a key suspect. For instance, neural stem cells share many of the same cellular pathways as well as a number of other characteristics with gliomas, such as high motility, close association with blood vessels, and the potential to proliferate widely and diversely [8]. If not neural stem cells themselves, a subset of their progeny known as glial progenitor cells are an alternative (or additional) suspect. While glial progenitor cells lack the limitless potential of their parents, they too are capable of continuously dividing, but their children are restricted to becoming glial cells such as astrocytes [8]. Although experiments in mice have shown that mature astrocytes are, in limited circumstances, capable of dedifferentiating and initiating tumor growth, undifferentiated cells like neural stem cells and glial progenitors are more readily susceptible to transforming into tumors [reviewed in 9]. It’s also entirely possible that there isn’t just one culprit; after all, there is vast heterogeneity of tumors within a specific classification (like glioblastoma) and even among cells in the same tumor [9].

Figure [modified from 8] showing the progression of neural stem cells to progenitors to neurons or glial cells.

Why does it even matter which cells give rise to glioblastoma and other gliomas? First, an improved understanding of the “cell(s) of origin” of different brain tumors would likely improve cancer diagnoses significantly. Until recently, brain tumors were identified solely based on their histologic appearance – i.e., what they looked like under a microscope. In 2016, the World Health Organization’s classification guidelines were amended to include molecular features, such as the presence of particular genetic mutations, for the first time [5].  With improved understanding of the cellular origins of different types of gliomas and other tumors, we may ultimately be able to have even more precise molecular identifiers that indicate from what and how the tumor came about. And with a more nuanced approach to tumor classification, scientists may better be able to predict the behavior of the tumor for determining appropriate treatments and providing prognoses.

Current treatment approaches for glioblastoma and other gliomas are rather brute-force; the tumor is physically removed as much as possible through surgery before being subjected to radiation and chemotherapy. But even so, most patients only survive about a year. Because of this, cancer researchers are working fervently to develop novel treatments that are more precise and effective (one particularly promising one, T-Cell therapies, was recently featured in its own NeuWrite article!), and an enhanced grasp of the cellular origins of these tumors could significantly help some of these approaches. For instance, stem-cell targeted therapies (see below) have the potential to selectively target the cancerous cells within a tumor for destruction. Although much of the bulk of a brain tumor may be removed during surgery, recurrence of glioblastoma is virtually inevitable, and this is likely due to the presence of cancerous stem cells that were not successfully removed. This approach, if successful, could drastically reduce rates of recurrence by specifically targeting those cells responsible for the initiation and maintenance of the tumor [10]. Thus, being able to figure out the culprit cells for a given tumor has massive implications for developing cell-targeted treatments.

In memory of John McCain

In July 2017, John McCain went in for surgery to remove a blood clot over his left eye. During that surgery, his doctors found a glioblastoma lying in wait behind that blood clot. Later that same month, he cast the deciding vote against the Senate Republicans’ “skinny repeal” bill, effectively putting an end to their years-long quest to repeal President Obama’s Affordable Care Act.

McCain in July 2017 after his diagnosis of glioblastoma

In his statement he complained that it was the process by which Republicans were trying to pass the bill that he took issue with, rather than its underlying goal. However, I have a hard time imagining that being in the position of suddenly needing extensive and unexpected medical care himself wouldn’t have factored in to his decision at all. I’d like to think that, with the realization that he was unlikely to live for much more than a year, he realized that this was an opportunity to leave a positive mark on his country. Regardless of the impetus for his decision, I am incredibly grateful for it.

If anything good can possibly come from such a grim diagnosis as glioblastoma, perhaps it is that people who suffer at its hands will become inspired to take actions, such as funding scientific research into understanding its underlying causes and developing better treatments, so that others don’t have to suffer from the same thing. For instance, Joe Biden now spearheads his own Biden Cancer Initiative as part of the Cancer Moonshot, and McCain’s family is raising money to fund a brain research position at the Translational Genomics Research Institute (TGen) in Phoenix, Arizona. Through these endeavors, the memory of John McCain, together with those who came before him and who are unfortunately still to come, may live on and continue the fight in the battle against glioblastoma. 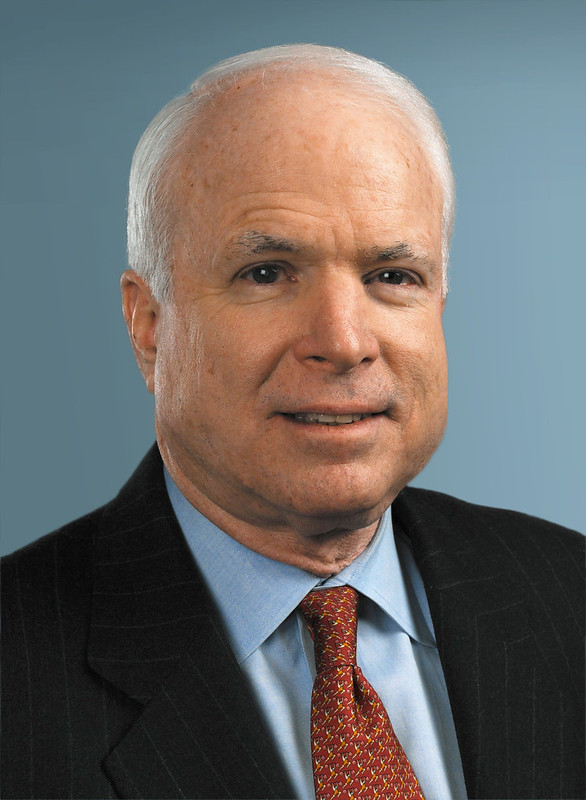 ← Your Virtual Self: Psychology in the Age of Virtual Reality Close Encounters of the Robotic Kind: A Glimpse of Autonomy →