Home » Behavioral Neuroscience » How germs in the gut control our brain 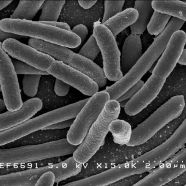 How germs in the gut control our brain

Posted by Matt Boisvert on October 26, 2013 in Behavioral Neuroscience, NeuWrite | Leave a comment

Bacteria are controlling our minds? Not quite, but recent evidence suggests that bacteria residing in the gut (gut flora) may play a much more prominent role in brain function than anyone ever thought. At first glance, this seems strange, as these are microorganisms are doing their thing pretty far away from the brain, and the concept of a bunch of microscopic critters living inside of you, influencing the way you think is weird and perhaps more than a little bit scary. However, there are over 100 trillion of these organisms living in your digestive tract-way more cells than comprise your body-doing things like making energy for you, modulating your immune system, fighting off harmful bacteria, synthesizing vitamins, and even producing hormones. With the amount of control these bacteria have, is it such a stretch to say that they can modulate your brain, perhaps by secreting things into your bloodstream, changing your immune system, or doing God knows what? A barrage of recent studies have come out indicating that bacteria can do just that: change the way your brain functions. Apparently, it’s trendy to suggest that your brain is being taken over by things living in your gut.

A recent study showed, using fMRI, that a group of women who ate yogurt containing 4 strains of a bacteria showed different activity throughout the brain in response to emotional attention tasks, compared to women who ate a similar, but bacteria-free diet. The study’s authors (funded by French dairy conglomerate Danone) linked this to observed alterations in resting states in the somatosensory cortex and limbic system, regions of the brain associated with sensory information and emotions and behavior (among many other things), respectively (1).  Another study found that a slew of chemicals thought to be associated with reduced stress and antidepressant properties were elevated in rats fed a probiotic diet (2). Although limited, maybe these two studies explain all those smiling women eating yogurt?

Don’t go reaching for your bottles of kombucha and tubs of yogurt quite yet: the study failed to find any significant differences in the (admittedly limited) behavioral assays for depression, and the yogurt study didn’t observe any behavioral change. Further, a 2011 study found a slightly effect. Here, mice with normal microbiota showed reduced expression of genes important in establishing and changing neuronal connections, as well as less overall movement and more anxiety in several different assays compared to a group of mice lacking gut microbiota. If these gut flora-free mice were seeded with a new gut microbiota, then they exhibited similar behavior and gene levels as normal mice (3). However, it’s hard to draw solid conclusions about the impact of bacteria on the brain outside of the (hopefully) now obvious conclusion that bacteria can have a drastic effect on the brain. Different bacteria can have totally different effects. To wit: another study injected mice with no gut microbiota with gut microbes from two separate strains of mice, finding that one strain’s gut flora increased exploratory behavior and elevated levels of BDNF, a hormone that increases neuronal growth, whereas the other strain’s gut flora decreased exploratory behavior (4). The differences in bacterial composition between the two breeds of mice was apparently big enough to have entirely opposite-but still significant-effects. Well, that showed me not to make conclusions about the effects of bacteria on the brain.

There is also a good amount of evidence implicating bacterial involvement in a several mental disorders. Irritable bowel syndrome, a dysfunction characterized by abdominal pain and constipation/diarrhea, has been known for quite some time to be associated with major depressive disorder. Somewhere between 40% to 90% have anxiety or depression-related psychiatric disorders (depending on whose study you happen to be reading), versus ~18% of the general population, according to National Institutes for Mental Health data. This association isn’t related to a genetic co-disposition, as was once thought, as a recent longitudinal study on identical twins found that when one twin had IBS and the other did not, the IBS-sufferer were significantly more like to also be diagnosed with depression or anxiety-related disorders (5). While the specific cause of IBS itself is unknown, it is generally thought to come from bacterial growth in the intestine, either through a general overgrowth of bacteria, or through the overabundance of a particular bacterium or suite of bacteria. This then inextricably links gut flora with brain states, as these mysterious changes in the gut lead to ten-fold difference in depressive psychiatric disorders.

In addition to depression there are even links between gut flora and autism. An analysis of the gut flora of autistic child, examined by looking through poop, of course, found that there were more bacteria of the class Clostridia (which is more easily assayed for than other bacteria) than normal children, and autistic children had 9 Clostridia species not found in the normal group, versus 3 novel species not found in autistic children (6). There’s another dozen or so studies suggesting the same weak link between this class of bacteria and autism. Further, a 2011 study showed that children with more severe autism are likely to have more severe gastrointestinal symptoms and vice versa (7). While only tenuous correlations at this stage, this research has led to a lot of hype and concerned parents scurrying to give their children probiotics, perhaps harmfully.

Much like cats’ knowledge of microgravity, we know very little about gut microbiota.

Needless to say, there is no straight answer to the question of how bacteria are influencing our brain, except to say they almost certainly have a significant impact. Virtually all the studies discussed herein are sort of wishy-washy, suggesting tenuous links between some bacteria vaguely affecting some brain state or behavior, maybe, with no solid mechanisms suggested. Perhaps there is an ongoing war in our gut, with ‘good’ bacteria fighting ‘bad’ for conquest of our brain, and a delicate balance must be struck between hundreds of different types of bacteria. In order to find out, more research must be done, but the problem with studying gut flora, particularly in humans, is their inaccessibility. We can’t isolate and grow most of the bacteria in our guts in the lab, which makes it challenging to study, as well as producing a bias towards studying those bacteria we can raise. We largely don’t even know what bacteria are in our genome, or even how many different species there are, with estimates ranging from 300 to five thousand (8). Additionally, there is extreme variability in the species of bacteria present between different people (up to a 50% difference!), as well as in quantities of particular species of bacteria. Fortunately, the Human Microbiome Project, a $140 million project started by the National Institutes of Health in 2007, is attempting to survey and sequence the entirety of the bacteria in the human gut, which could lead to promising results. However, from there (assuming we can actually get a sense of all the bacteria in the gut), we will reach the same problem that the Human Genome Project faced: we have all the sequencing data, but how do we ascribe function to it, and make it something useful? The questions of how these bacteria are exerting this influence are almost uniformly unanswered. Bacteria may be controlling our minds, but it will be a while until we know what they are doing and can control them right back. In the meantime, we can pummel them with antibiotics to show them who’s boss (but really, this is a terrible idea)!

5) Whitehead WE. Twin studies used to prove that the comorbidity of major depressive disorder with IBS is NOT influenced by heredity. Am J Gastroenterol. 2007 Oct;102(10):2230-1.

← Who will you be this Halloween? The Shape of Things to Come →