Home » Cognition » Zombies are real – I wish I was kidding.

Zombies are real – I wish I was kidding.

Zombies terrify me. Maybe it’s their helter-skelter gait and bloody outstretched arms, or perhaps the fact that they eat brains, and I happen to like brains. That must be it.

You know what’s also horrifying? Our contrived Hollywood concept of zombies is derived from the Haiti zombi, a real phenomenon that occurred in the context of Haitian vodou, just decades ago.

In the 1980s, anthropologists knew that Haitians had a strong cultural belief in zombies, but didn’t think there was any pharmacological basis behind it until an anthropology graduate student, Wade Davis, ventured there for six months and returned with a shocking finding: the Haitians had actually created zombies with a two-step pharmacological process (Davis, 1983). Think your research is hard to defend? Imagine a thesis defense with the title: I Found Zombies (albeit not quite the Hollywood type) in Haiti.

Davis followed the zombification of Clairvius Narcisse, a Haitian man who in 1922 was declared dead and was buried, but returned to his hometown 18 years later (Hahn, 2007). After interviewing Narcisse and his family and friends, Davis discovered that Narcisse was intentionally poisoned, perhaps by his brother over a land dispute. There are many legends regarding how the Haitian poison is administered; some Haitians claim that the poison is a powder spread in the entrance of one’s home, while others insist it is administered by slipping it into someone’s food. After speaking with witch doctors and testing samples, Davis discovered that the active ingredient in the zombie powder was Tetrodotoxin (TTX). TTX is a compound created by puffer fish that blocks the sodium channels of the neural membrane. For neuroscientists, TTX is a useful way to block sodium entry when you want to isolate the activity of other channels. When given to humans – as is known to happen with puffer fish – it has disastrous effects: slurred speech, paralysis, very deep sleep, and with just 25 milligrams or more, death (Isbister et al. 2002). 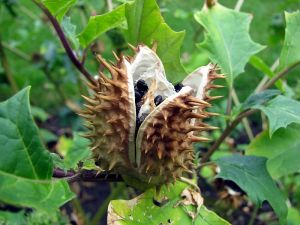 A clever mix of chemicals and cultural forces, the powder slowed heart rate so much that the victim appeared dead, and upon waking was fed the “zombie’s cucumber.” The zombie’s cucumber is the plant Datura Stramonium, known for its hallucinogenic effects including suggestibility, which keeps the zombies submissive and, in Narcisse’s case, allows them to be enslaved. Importantly, the plant contains several tropane alkaloids that are classified as deliriants, which cause stupor and a state similar to sleepwalking, also known as a fugue state (for more on similar types of memory loss, see this post). According to Davis, Narcisse was dug up, beaten, and led to a nearby plantation, where he was told that he was a zombie and therefore required to work. Zombies like Narcisse were forever changed from this radical experience but they were not in a permanent state of submission if they could be freed in some way; Narcisse, along with a few other Haitians, eventually gained consciousness and overthrew those controlling them.

During “zombie sleep”, many report having an out of body experience, such as seeing their body surrounded by loved ones. Many ex-zombies report full consciousness while they are “dead”, and have even been able to recount the details of their funeral processions. Narcisse remembered being put in his coffin, and even had a scar on his face where a nail from the coffin punctured him. Since Davis’ report, other case studies of Haitian zombies have emerged (Littlewood & Douyon, 1997).

Yet, Davis’s account has received some criticism from the scientific community, mostly because there is contradictory evidence as to whether the zombie powder contained enough TTX to cause damage, or whether the effects of TTX are consistent with the description of zombies (Kao & Yasumoto, 1986; Davis, 1988; Benedek & Rivier, 1989). In addition, it would have been difficult to maintain the victim in a continual zombie state – although Narcisse was reportedly drugged for two years – because they might develop tolerance to the deliriant effects of the Datura or die from overdose. Davis attributes much of the zombi phenomenon to the power of expectation and the conditioning effects of culture, arguing that the zombies’ actions are perpetuated by the Haitian superstition of Vodou:

“Becoming a zombie is essentially a magical event and has a social reality in Haiti that continues to influence behavior. We’re trying to see if there can be, at the basis of that belief, a physical reality that can explain the rare cases that pop up from time to time, including the case of Narcisse.” (Davis, 1985).

So if you decide to cuddle up with a pumpkin spice latte and a zombie movie this Halloween, remember one thing: zombies are real (or at least at one point in history, they were, and one of the authors thinks they still are…). Enjoy the movie.

*This post was a collaborative effort by Ashley Juavinett and Ray Van Cleve. An earlier version of this post, written by Ray, appeared in Ashley’s blog. Ray Van Cleve is a freelance writer who spent 9 months working in Haiti, and currently resides in Pittsburgh. You can follow him here.

Davis, W. 1985. The Serpent and the Rainbow. Also made into a movie, which sounds terrifying.

← The Shape of Things to Come Let’s Talk About LGBTQ Visibility in Science, Baby →