Posted by Ashley Juavinett on October 31, 2014 in Halloween Week | Leave a comment

The modus operandi of a vampire is pretty straightforward: drink blood, live forever. Vampires consume more blood and live longer than everyone else, so surely, these two things are related. But how exactly does blood allow vampires to live forever?

In an effort to find the root cause of immortality in vampirism (okay, kidding, they’re actually interested in things related to real, living and inevitably dying humans), a few researchers at UCSF & Stanford had an idea: what happens when you put young blood into old mice? Better yet, they grafted the vascular systems of the two mice together. This is bona fide creepy, and if you’re so inclined, go ahead and google image search “mouse parabiont.”

Lo and behold, the old mice in the freaky young-old attached mice pairs had an increase in genes associated with synapse generation, and more dendritic spines in their hippocampus (Villeda et al., 2014). Conversely, a group at Harvard found that young mice with blood from old mice had brains that looked older, with a decrease in neurogenesis in the subventricular zone, another area of the brain that is known to regenerate cells throughout your lifespan (Katsimpardi et al., 2014). So young blood means more plasticity and synapse formation in the hippocampus, and old blood interferes with these processes.

In a set of behavioral experiments, old mice received doses of young blood plasma and then were trained on various tasks. The young-infused mice performed better than the old mice on a water maze task, finding a hidden platform much sooner. Using a scent discrimination task. the Harvard group found that mice with young blood seemed to be more interested in odors at lower concentrations. This suggested that they had better odor discrimination – potentially an effect of having better neurogenesis in hippocampal regions. 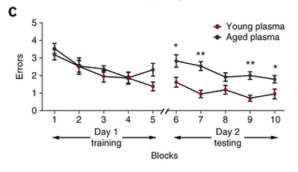 Here you can see that animals injected with young plasma make less errors on a water maze test, once they’ve already been trained. From Villeda et al., 2014.

So what exactly is in the blood that has some wondrous, life-imbuing property? The data suggests that it’s a protein known as GDF11, present in the blood of young animals, but not old animals. Raising levels of this protein actually improved blood flow in muscles, as well as the brain, and increased the expression of Sox2, which marks proliferating neural stem cells. Importantly, GDF11 is present in both mice and humans, meaning that this could have clinical applications. However, neither of these studies attempted to see if there was an effect of the GDF11 or blood transfusions on lifespan, so it is still unknown whether or not this protein is directly linked to immortality in vampires.

In a statement for The Guardian, lead author Saul Villeda said, “The evidence is strong enough now, in multiple tissues, that it’s warranted to try and apply this in humans.” Is Villeda a proponent of vampirism? UCSF, you’ve been warned.

Check out this Radiolab feature on blood, featuring Villeda.