Home » Culture » Subtle sexism: Stereotypes and how they shape us 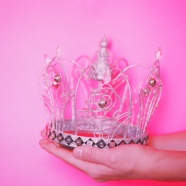 Subtle sexism: Stereotypes and how they shape us

Gender stereotypes are pervasive. Though Disney has recently come out with some kick-ass princesses (my personal favorites are the icy Elsa and fiery Anna, who don’t need a prince to save them in Frozen), enter any major toy store and you can still find row upon row of pink paraphernalia and sparkly tiaras.

Trying to understand the cognitive neuroscience of a cultural and societal construct like gender is no easy task. How and why do we propagate associations between gender and (arguably) arbitrary elements (e.g., girls like pink)? What consequences could such seemingly harmless associations have on self-perception and decision-making? Are some gender-based differences useful and/or necessary in society—and if so, what do they contribute? These are hard questions to answer, but this month, NeuWriters will explore some of the factors that influence interactions and expectations based on gender.

In terms of college majors, women dominate in fields like health, education, and social work, while more men are found in fields like computer science and engineering. Despite the claims of a recent article published in the journal PNAS, women are still overshadowed by men when it comes to getting high-profile jobs in academia and science (for example, see this article and this blog post for a rigorous discussion). Of course, the fact that men and women’s school and career choices differ is not an indicator of sexism in and of itself—but it is likely an indicator that there are different expectations for men and women in terms of education and careers (not to mention different obstacles they may face along the way). For example, subtle differences in how we talk to men and women about science and math—from an early age—could certainly play a part in shaping an individual’s expectations for her- or himself (see also this NeuWrite post on stereotype threat).

Expectations based on gender affect more than our self-perception—they affect how we perceive the actions of others in work and academic settings. When undergraduates assess their college instructors, students systematically associate their male and female instructors with different traits—both positive and negative. Across disciplines, ratings for female instructors are more likely to include words like “nice” and “caring” but less likely to include “funny,” “intelligent,” and “smart” (by a landslide). Male instructors’ ratings are more likely to include both “jerk” and “boring,” but less likely to include “rude,” “strict,” or “unfair.” The conclusion that these data suggest is that students might be evaluating professors along different dimensions from the start. If you’re interested in checking out other word-gender pairings, check out the interactive graphing tool created by history professor Ben Schmidt. 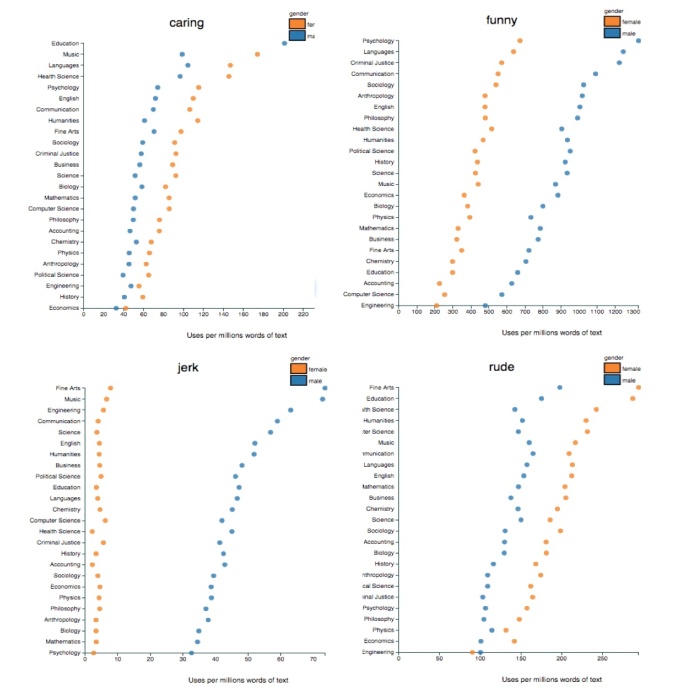 One of the most amazing things about using the tools and paradigms of social and cognitive psychology to study human behavior is that subtle—and sometimes unconscious—differences in behavior, depending on the context, can be revealed. One paradigm for studying people’s conceptual associations uses semantic priming—the fact that people respond faster to words and concepts that are related in meaning. In some semantic priming tasks, researchers have people read a word (the prime) and make a judgment about a subsequent item, like whether a string of letters is a word or not (e.g., ‘dafhes’). For instance, if you read the word “zebra” (compared to some other noun, maybe “elephant”) you will then be faster to decide that “stripes” is a word [Meyer & Schvaneveldt, 1971]. What’s really cool is this phenomenon–called semantic priming–extends past immediately-related concepts. If you read the word “lion,” you’ll ALSO be faster to respond a word like “stripes”–because lion is related to tiger, and tiger is related to stripes [Balota & Lorch, 1986].

In the realm of social psychology, researchers use this basic phenomenon, priming, to investigate implicit associations between concepts—associations someone might not know about (or want to have). For example, researchers have used the Implicit Associations Test (IAT for short) to index stereotyped beliefs that people might have regarding gender and careers. A typical IAT will first ask people to categorize one sets of categories (for example, family/career) and then another (for example, male/female). Then, researchers measure accuracy and reaction time when people categorize both sets, where one member of each set stereotypically goes with a member of the second set (e.g., perhaps female and family, male and career) compared to the other way around (e.g., female and career, male and family). On average, people are faster when they have to respond in the same way (e.g., by pressing a button on the left, vs. on the right) to the categories that are stereotypically associated. So when people have to respond using their left hand to both the “female” and the “family” category, they’re faster and more accurate than when “female” and “career” categories are paired. [If you’re interested in trying this, head on over to the Project Implicit site.]

An example from the career/gender IAT. Source: Project Implicit.

So how do stereotypes translate into behavior? Sometimes, negative consequences of stereotyping can be obvious. At the level of inter-personal relationships, many women still report experiencing ritualistic sexism in the form of catcalls—and in the horrifying practices of so-called pick-up artists who follow “The Rules of the Game,” a how-to guide containing tips for going out to bars to convince women to sleep with you, with recommendations including techniques like “negging“–or putting down a potential mate so that they feel inferior.

But sexism is not typically so blatant. Most men and women are not pickup artists, and most people do not consciously manipulate others based on gender. In a recent study published in the journal Sex Roles, authors Jin Goh and Judith Hall examined the nonverbal correlates of two hypothesized brands of male sexism (that is, prejudiced views about women held by males): hostile sexism, which is described as antipathy towards women based on a belief that men should be dominant, and benevolent sexism, which is defined as “a subjectively positive view of women [who are seen as] pure and warm yet helpless and incompetent beings” [p. 253]. The authors had men and women pairs engage in a structured activity (playing the board game Trivial Pursuit) and an unstructured conversation. Then they quantified different types of “affiliative” behavior of men towards the women—that is, how often they displayed nonverbal behavior that suggested a positive bond or association with the women. For example, smiling and leaning forward were both considered affiliative actions. After the experiment, they also had men complete a questionnaire called the Ambivalent Sexism Inventory [Glick & Fiske, 1996], which provides estimates of both hostile and benevolent sexism. The authors found that men who scored more highly on the benevolent sexism scale were more likely to smile and show nonverbal impressions of affiliation. Similarly, those who score more highly on hostile sexism were less likely to show affiliative behaviors.

Researcher Peter Glick, who created the ASI questionnaire, has written that both types of sexism–benevolent and hostile–can in fact be correlated, and that one can belie the other. Glick and colleagues propose that when people evaluate other groups (whether it be based on gender or a minority group), they often group them in two related ways: as warm but incompetent or as competent but cold [Fiske, Cuddy, & Glick, 2007]. They underscore the dangers of benevolent sexism, suggesting that it is “…pernicious in that it is more likely to be accepted by women … [and] corresponds to other paternalistic prejudices [which are] directed at groups that are lower in status and viewed as cooperative or nonthreatening” [p. 117, Glick & Fiske, 2001].

One glaring issue with the positions taken by many of these researchers is that they are one-sided. It may be the case that sexism correlates with behaviors, but to investigate this only in one gender (here, men) seems short-sighted. Are individuals who identify as male and female equally likely to exhibit such correlations between sexism and behavior? And even if sexism is typically one-way (i.e., if men typically exhibit more sexist feelings and behaviors), it is important to understanding how sexism affects those it is directed against. If some individuals do simultaneously act “affiliatively” toward one group, and do so out of feelings that that group’s members are incompetent, what might the consequences be?

Neurobiologist Ben Barres published a commentary in Nature entitled “Does Gender Matter?” addressing the hypothesis that innate gender-based differences can account, at least in part, for differences in career outcomes for men and women. His perspective is that such perceived (innate) differences do much more harm than good and that discrimination, not innate differences, is to blame for disparities between men and women’s achievements in science fields. Barres is a female-to-male transgendered person and provides a window into what it means to be understood by one’s gender: “By far, the main difference that I have noticed is that people who don’t know I am transgendered treat me with much more respect: I can even complete a whole sentence without being interrupted by a man” (p. 136). In his commentary, Barres quotes Stephen Jay Gould, who eloquently expresses the dangers that can be endemic to prejudice:

“Few tragedies can be more extensive than the stunting of life, few injustices deeper than the denial of an opportunity to strive or even to hope, by a limit imposed from without, but falsely identified as lying within.”

Understanding the unconscious biases we have, how they affect our behavior, and how that behavior affects others is no small task, but social and cognitive scientists have the research tools to examine some of the imposed limitations that Gould suggests—some more obvious than others. Could we—or should we—ever hope for world in which gender is no longer a useful construct? (Or, as the The Onion suggests, tongue in cheek, should we realize that it’s time men and women went their separate ways?) We may not have the complete story yet, but continued research examining the subtle effects of biases in naturalistic settings may help open everyone’s eyes to how our beliefs about others can affect their well-being.

← Birds, Brains, and Boats: The Harvey Karten Story Beyond Black and White: Gender Identity and the Brain →