Home » Gender Month » Beyond Black and White: Gender Identity and the Brain 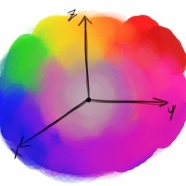 Beyond Black and White: Gender Identity and the Brain

May is Gender Month here at NeuWriteSD! This is the second of four pieces exploring neuroscience and gender; you can read Melissa T.’s excellent post on subtle sexism here.

It’s amazing how much of our culture is historically focused on binaries: issues are black or white, characters are heroes or villains, actions are right or wrong. But as society gets more complex, so too does the idea that things need to fall on either side of a binary. Now we see things as shades of grey, cheer for anti-heroes (Walter White comes to mind) and argue about moral relativity. Is it any wonder, then, that even something as fundamental as our gender might not be as binary as we once thought? It is becoming increasingly clear that there are many people who do not identify as their assigned gender of male or female, who instead categorize themselves in one or more of a number of non-binary gender identities. But what does science have to say about this?

Terminology can become very problematic when digging into the research on non-binary gender identity. In most cases, any subject who identifies outside the gender they were assigned to at birth is classified as transgender (or transsexual, depending on the age of the paper). However, this is complicated by the fact that there are an increasing number of singular non-binary labels that people use to describe themselves. A recent study found that in a population of 292 subjects who would be typically be classified as “transgender,” the most common gender identity amongst participants was “genderqueer”, with “transgender,” “transsexual” and binary identities trailing after (1). As can be seen in the diagram below, the terms used to describe one’s experience of gender are far more varied than the generalized “transgender” category. In the interest of clarity, I will be using the term “transgender” to refer to all non-binary subjects, though the singular label they use may vary. 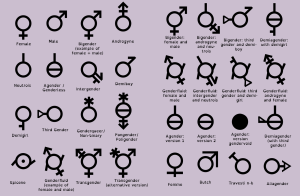 One example of suggested symbols for singular gender labels

One of the most persistent questions in non-binary gender research is whether the brains of transgender individuals reflect the gender they were assigned at birth or the gender they identify with. There are several regions in the brain that differ based on assigned/biological sex as well as on cognitive tasks that show markedly different results in male and female participants. Most studies have focused on these well-established sex differences to investigate the neurological underpinnings of gender identity.

One early paper to undertake this methodology came from Dr. Dick F. Swaab’s lab (2). Their initial work focused on the central part bed nucleus of the stria terminalis (BSTc). In animals, this area is known to play an important role in sex-mediated behaviors, and in humans it is reliably larger in males than females. Most critically, its size is not affected by hormonal changes in adulthood, and thus would not be affected by any hormone treatment undertaken during transition. Dr. Swaab’s lab found that in assigned male at birth transgender individuals (AMAB), the BSTc was significantly smaller than in cis male subjects and was not significantly different in size than in cis female subjects. Thus, this area of the brain more closely resembled the gender they identified with than the one they were assigned at birth. This observation was supplemented with a similar finding in another brain nucleus that differs in size between men and women, the uncinate nucleus of the hypothalamus (3). Again, AMAB trans subjects had a uncinate nucleus that resembled that of cis female subjects, and significantly differed from those in cis male subjects. These areas, previously thought to reflect the genetically determined sex of the individual, appear to be more associated with gender identity than assigned gender.

The other main line of research regarding the brain and gender identity focuses on brain activity during cognitive tasks that show performance-related sex differences. Most commonly used is the mental rotation task, in which participants view a 3D figure and are subsequently asked to identify two rotated versions of the figure from a set of four possibilities. Males have been shown to perform this task more easily than females (4). One study looked at AMAB trans subjects before and after hormone therapy was begun and compared their performance in the mental rotation task to cis male controls (5). The task was done in an fMRI scanner to investigate which brain regions were activated during task performance. While the AMAB trans group did not perform significantly worse than the control group when it came to task performance, the brain regions activated during the task did differ. Cis male controls showed greater activation in the inferior parietal cortex, which is a region that has been associated with mental rotation. AMAB trans subjects, both before and after hormone treatment, showed more activation in temporo-occipital regions, a pattern more commonly seen in females (6). 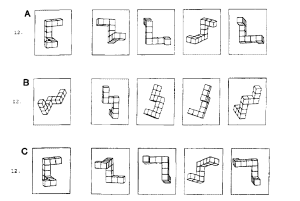 While there is clearly some evidence that the brain may be more reflective of gender identity than biological sex, there are still relatively few studies the focus on the brains of transgender individuals. In particular, there is a major lack of studies with assigned female at birth (AFAB) transgender participants This may be due to a number of factors, many of them societal, that stigmatize transgender individuals and make them more reluctant to participate in studies. As our society becomes more and more comfortable with the idea that people may identify outside the male-female binary, neuroscience could play a critical role in understanding and validating non-binary gender identities.

Acknowledgments: My deepest gratitude to Kord I Fierro for their indispensable assistance in proofreading this piece and educating me further on issues of non-binary terminology, representation, and transphobia.

← Subtle sexism: Stereotypes and how they shape us Your Brain on Sex →