To Sleep, Perchance to Swim

Posted by Xi Jiang on July 30, 2015 in Uncategorized | Leave a comment

Humans sleep, for hours or minutes, alone or in company, with or without dreams. As universal and important as sleep is for us, not all our animal kin share our daily indulgence in inactivity, despite the likely immunological and cognitive benefits/roles of human sleep (discussed in a previous NeuWriteSD post). Many species do, however, experience daily periods of altered behavior that resembles sleep: inactivity and lessened responsiveness to external stimuli happens to fruit flies and frogs as surely as to graduate students. Hormones involved in circadian rhythm (the so-called “biological clock”), such as orexin and melatonin, came into existence long before pillows and pajamas [1, 2], and are key mediators of non-human “sleep” [1, 3] . Based on the history of melatonin, in particular, some have proposed a potential explanation for why we sleep: our myriad soft-bodied and planktonic distant ancestors, in a vast and alien ocean, evolved to swim up from the depths under the setting sun for food, and then return to the depths for shelter. [3, 7] 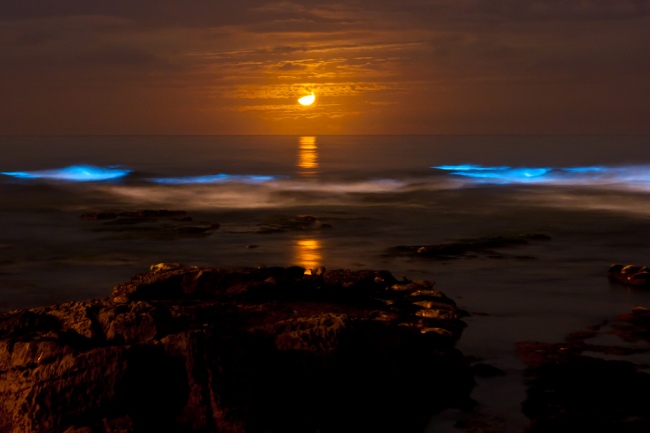 Bioluminescence at La Jolla Cove, California.. The dinoflagellates responsible for the blue light congregates at the sea surface throughout the night, where they and their less fortunate relatives provide predatory plankton with nourishment. The orange celestial object is a quarter moon, or so I have been told. [a]

This evocative non sequitur, of course, needs some elaboration. While the adage “life comes from the sea” is not entirely accurate when one considers ancient microbes [4] and some early evolutionary dead-ends [5], our existence today as humans does owe most of itself to the salty waters. Our backbones, for those of us who have them, evolved about 540 million years ago in the Cambrian Period [6], when our old relatives with rudimentary spinal cords swam or drifted amongst claw-mouthed shrimp and elephant-nosed worms. For those proto-carnivores (though there was precious little meat and a lot more crunchy jelly) and their own ancient relatives who hunted instead of photosynthesized, the major food source was phytoplankton [8], whose then-diversifying membership included algae, protists that were too cool to be algae, and other unspeakable, eldritch things that made life possible.

Our Cambrian relatives. Guess who’s the proto-vertebrate? Hint: it may not look like one. [b]

To hunt, one has to go where the food is. Since phytoplankton concentrates near the sea surface due to the needs of photosynthesis, it would certainly be advantageous to have some means of swimming upwards when hunger strikes. However, the sea surface is not a kind place when the sun is out; ultraviolet radiation and better visibility for the predators higher up on the chain could really ruin a plankton’s day [9]. Therefore, the hunters of old that were capable of swimming vertically toward or away from the surface at the right times—enough light to hunt, but not enough to hurt—would likely gain some survival advantage, as supported by the widespread phenomenon of diel vertical migration. The act of swimming, or of mostly futile motility in the form of wriggling cilia and flagella, evolved in the old days even before multicellularity, as we say, became a thing. As the first “big” planktons comprising of many specialized cell types—not the least of which were neurons—appeared, either as stand-alone species or as larval stages for something bigger and nastier, communication and coordination became important to improve swimming techniques and to choose (or at least to favor) a general direction of movement [10].

An adorable (?) representative of cephalopod larvae, with color-changing chromatophores. For most cephalopods, only the larval stage can be properly called “planktonic”, since the adults are capable swimmers. [c]

One would expect, then, that neurons in some planktonic species began to help guide the swarms’ daily vertical migrations at some point, in a coordinated and clock-like fashion reminiscent of what we modern animals are capable of with endocrine systems, e.g. hormone-regulated circadian rhythms and sleep control [11]. In other words, a crucial component of what we call sleep might have arisen from our squishy ancestors’ need to swim strategically. In support of this, a study published last September in Cell [3] demonstrated in the marine annelid (i.e. ringed worm) living fossil Platynereis dumerilii that melatonin, one of the major regulators of human sleep [12, 13], is produced by photoreceptors in the brains of planktonic larvae. In addition, components of circadian clock, proteins that participate in making melatonin, and opsins are all being made in the same brain regions, suggesting a cooperative control of neuronal activity by molecular time-keepers, melatonin producers, and light-sensors.

Left: electron microscopy image of a Platynereis dumerilii larva. The fluffy blue ring comprises of many cilia. Middle: a cartoon slice of the larval brain. In red: the region where opsins can be found alongside genetic markers of circadian clock, phototransduction, and melatonin synthesis. [3] Right: a depiction of clerical tonsure. [d]

In P. dumerilii larvae, who hunt (or rather, chance upon) algae near the sea surface, melatonin changes the coordinated movement of cilia at night by inducing cilia-controlling neurons to produce action potentials in short bursts, causing “hiccups” that interrupt the beating cilia and allow the larvae to sink throughout the night. During the day, melatonin release is reduced, and the locomotor neurons fire sparsely, producing more contiguous cilia movements that guide the larvae towards the ocean surface until dusk. [3] While the larvae’s nocturnal behavioral state differs substantially from what we recognize as sleep (and there is yet no evidence for planktonic dreams), when researchers exposed the larvae to melatonin during the day, they observed more ciliary arrests, indicating an involuntary switch to nocturnal behavior. And many modern humans know that switch intimately: in colloquial terms, it is called “jet lag”.

Of course, as important as melatonin is and has been, it is but a component of the complex event known as human sleep. Aside from dozens more neuropeptides sharing controls of sleep onsets, exits, and stages [11], the nocturnal behavioral state for us non-planktons has acquired crucial components (restoration, memory processing, etc.) beyond changes in locomotion. As far as we have come since our planktonic beginnings, there is still much to discover about said beginnings and how they led to what we are today. To learn just how similar we are to the lineages stretching millions of years back, and to conceive how the things we take for granted might all have natural reasons to be—one must hope that the sense of wonder will always be enough for some of us who, unlike plankton, strive to know themselves.

[b] The History of Life, Finnish Museum of Natural History Virtual Exhibitions. https://koivu.luomus.fi/english/virtualexhibitions/historyoflife/cambrian_explosion.htm