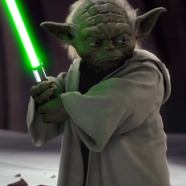 Even if you haven’t seen the Star Wars films (yes, those people do exist and yes, it’s rude to yell at them until they watch them), you probably know three key things about Jedi Master Yoda: he’s small, he’s green, and he talks funny. Specifically, he switches around the order of some of his words; where we would say “it will consume you”, he says “consume you it will.” This is a manner of speech unique to Yoda- no one else in the film series uses their words the way he does. Is this just a characteristic of whatever species Yoda is…or could there be something going on in his brain? 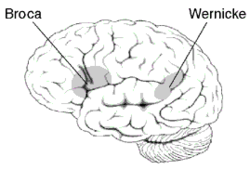 When damage occurs to either of these areas, speech is affected. These disorders (called aphasias) have vastly different symptoms based on which area has been damaged. When Broca’s area is affected, patients have trouble physically speaking and producing words (more on this condition can be found in other pieces on this site, including one of my earlier posts). Damage to Wernicke’s area leads to a variety of problems creating intelligible speech- from repeating the same words over and over, to switching sounds in words to the point that they become unrecognizable [2].

So does Yoda have one (or both) of these disorders? He often speaks in very short, direct sentences that leave out words that most people would use:

“Difficult to see. Always in motion is the future”

And he certainly mixes up the clauses in his sentences, giving his speech that characteristic Yoda-ness

“Truly wonderful the mind of a child is”

These could both be attributed to damage to the language centers of the brain- possibly sustained from one of his great lightsaber battles. In the end though, I don’t think any of us would want to see Yoda “cured” of his unusual speech patterns. They’re what make him the wise, beloved Jedi Master that we know and love today.

← Real Jedi Mind Tricks: The Psychology of Mind Control Who wants to be an astronaut? →