Home » Uncategorized » Your Brain on Love

Your Brain on Love

Posted by Marley Rossa on February 14, 2019 in Uncategorized, Valentine's Week | Leave a comment

An oldie but a goodie! Happy Valentine’s day, everyone!

Have you ever been in love? I’m not talking about your inability to go without your morning cup of joe, your appreciation for evening snuggles with your cat, that first spoonful of chocolate mocha brownie ice cream on a hot day, or even a bear hug from your best friend. I’m talking about the vertigo you experience when you realize you’ve been staring at a wall for an hour thinking about him. The beat your heart skips when she looks at you and flashes that gorgeous smile. Replaying your most recent interaction over and over in your head, wondering exactly what he was thinking, what she REALLY thinks of your dorky hat, and what your future together would look like. When you’re falling in love, you might find yourself daydreaming about your next encounter with that one person, worrying about whether your feelings are reciprocated, and feeling drained from all of the energy you’ve invested in winning this person over. You might take bigger risks than you usually do, or present an exaggerated version of yourself in an effort to gain attention from the object of your affection. Ultimately, falling in love can be exhausting, confusing, and downright scary. The fear of unrequited feelings, the anticipation of knowing you’re about to see that individual, and the elation after having scored a date comprise only a few ingredients in the cocktail of sensations you might experience while falling in love. But when we’re in love, why do we experience this whirlwind of emotions, why do our brains seem to go haywire, and why do we sometimes feel like our thoughts are bringing us to the brink of obsession?

Unsurprisingly, this vast array of emotions and sensations can be attributed to a complex system of interacting physiological processes. In addition, the process of falling in love is far from uniform, and everyone might experience it differently [1]. Consequently, it has been difficult for scientists to develop a precise and quantifiable definition of romantic love. However, the convention in biology has been to classify the physiology of love into three major drives: attraction, attachment, and lust [2]. Each of these processes has been associated with activity of a host of hormones and neurotransmitters [3], a unique set of physical and emotional attributes, and a distinct evolutionary basis. In fact, falling in love might provide some key health benefits and may actually have been crucial for our survival as a species. To illustrate this, let’s take a quick look at each of love’s constituent drives and examine how they might contribute to our overall well-being.

Also known as partner preference, attraction might be one of the first words that comes to mind when you think of being in love. The neurotransmitter dopamine is a critical component of the neural circuitry underlying this pathway, as it underlies reward and motivation, two key elements of attraction [4,5]. When we are romantically attracted to someone, we see their physical presence and as inherently rewarding and are subsequently motivated to seek out ways of gaining that person’s affection. The most obvious element of attraction is likely physical; we tend to be attracted to faces that appear more symmetrical and groomed, clothes that are clean, and specific body types that signify strength, fertility, and overall health [6,7]. Physical characteristics aside, people can also be attracted to specific personality traits such as humor, confidence, and intelligence.  Both physical and personality features might be especially desirable in that they relate not only to what a potential long-term partnership with that person might be like (fun and spontaneous? Serious, intellectual?) but also which traits might be passed down to one’s offspring.

Oxytocin and vasopressin are neuropeptides that play a crucial role in mediating attachment between partners [8]. Oxytocin has been repeatedly cited as a regulator of sexual reproduction in both males and females [9,10] and has also been shown to play a role in the formation of monogamous pair bonds between the male and female prairie vole [11,12]. Finally, oxytocin operates within a specific neural circuit which modulates fear; nasally-administered oxytocin has been shown to inhibit responses to fearful stimuli [13]. In the context of romantic love, this result might be interpreted as a mechanism through which we become more comfortable and secure around a particular individual. Moreover, this feeling of well-being is strongly reinforcing and causes us to continue to crave the physical presence of that individual. 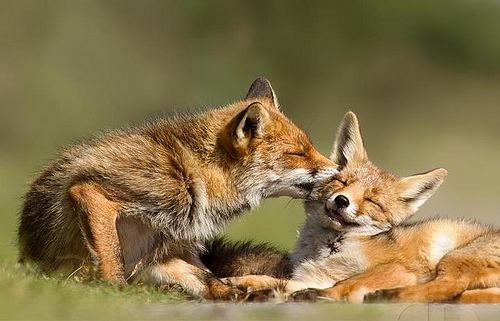 All rights reserved by Hisham Alqawsi

The effects of the hormone vasopressin are arguably more subtle in that one of its primary roles in the central nervous system is to increase the activity of feedforward neural pathways involved in reward circuitry. This ultimately results in the reinforcement of rewarding social behaviors and the subsequent strengthening of these pathways. Put simply, vasopressin causes us to gradually become more attached to a particular individual by making it more and more pleasurable to be around them [14]. Evolutionarily, the strengthening of attachment between two individuals might have benefitted us in a couple of ways. Firstly, because children are dependent on their parents for help and guidance for a substantial amount of time after birth, attachment might serve as a means of promoting mutual parental support throughout childhood. In a more direct sense, being in a monogamous relationship promotes each individual’s health by preventing the spread of sexually-transmitted disease.

Lust refers almost exclusively to the pursuit of intimacy and sexual relations with a specific individual. Lust manifests itself as an increase in libido, or sex drive. As part of the endocrine system which controls many basic bodily functions, the hormones estrogen and testosterone are important modulators of one’s sex drive. Interestingly, they also interact strongly with the dopamine system involved in attraction, making the experience of physical intimacy with a particular individual inherently more rewarding. Dopamine is released when one is aroused, making it a key element in the process of lust and the pursuit of copulation and sexual gratification [15]. The fact that physical intimacy is rewarding and motivating is undoubtedly important for the process of reproduction and the ultimate preservation of our species. Therefore, the component of love represented by lust allows us to seek out a sexual relations specific partner whose physical features we (consciously or subconsciously) find attractive, features that often signify fertility and reproductive potential.

Clearly, being in love comes with a host of psychological and behavioral changes, including increased intimacy and sexual encounters, physical and emotional feelings of attachment, and a greater sense of security. Lesser known and understood is the biological basis of love and the physiological changes that accompany it. Characterizing and classifying each of these processes into identifiable sets of networks and processes has been important for enabling us to elucidate one of the most complex biological phenomena essential to our existence. Perhaps most importantly, it allows us to gain a deeper understanding and appreciation for one of the defining features of our species: the unmistakable yet indescribable experience of falling in love.

← CBD: Believe the Hype? The Scientific Adventures of Ben Barres Part I: Dishing out Discoveries →