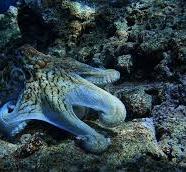 Now you see me… now you don’t

Posted by kelseysundby on September 26, 2019 in Animals, Evolution, Perception | Leave a comment

At a very young age, I was caught on camera during a game of hide-and-seek. In my bright red coat, I sat crouched against a tree in full view of the seeker with my hands cleverly placed over my face to obstruct any chance of being found. Until ages 4 to 5, we humans are miserable at hiding [1].

Luckily for us, hide-and-seek is usually a low-stakes game. For cephalopods, however, it’s another story. Cephalopods are a group of mollusks with soft squishy bodies and little external protection to the many predators that lurk in the sea. For cephalopods, hiding is often a matter of life or death. Through evolution, a group of cephalopods called coleoid cephalopods, which includes squids, octopuses and cuttlefish acquired an impressive knack for deception. In just milliseconds, these creatures are able to transform both in color and texture to blend in with their background environment [2]. But how does this magic work?

Coleoids are equipped with hundreds of tiny organs called chromatophores. Inside these chromatophores are small sacs of pigment that become visible when radial muscles pull on the chromatophore organs, opening the sac and stretching the pigment across the skin’s surface. Because the radial muscles are controlled by the brain, this change in physical appearance happens on a scale of milliseconds and can be carefully controlled to spread the color in specific patterns that tailor to the background [2,3]. After all, turning a uniform brown color while lounging on sand made of many shades of brown is likely to make you a shark’s next dinner, but turning a speckled brown could let you fly (or in this case, swim) under the radar.

The pigments in chromatophores allow these creatures to achieve various shades of reds, yellows, and browns. Since the deep ocean floor is largely composed of this color trio, chromatophores alone can be effective concealers. As such, the chromatophores provide the “run-of-the-mill” camouflage. But to put some real pizazz into their camouflaging antics, coleoids also have iridophores. Iridophores are a thin layer of reflector cells in the skin that reflect light back at wavelengths of blues, greens, and reds. The observed color depends on the perspective of the viewer. For instance, if viewed from above, the iridophores will appear various hues of blue. From a more oblique angle, the reflected light will appear red. By combining the optimal pattern of chromatophore stretching and light reflecting off iridophores, coleoids can blend into almost any surrounding [2,3,4].

Lastly, cuttlefish and octopuses have an additional set of light reflecting cells, the leucophores, that provide even greater wardrobe flexibility. Leucophores, sometimes called “white cells,” reflect the full spectrum of light. Unlike iridophores, the color created by light reflecting off of leucophores does not depend on viewing angle. Instead, areas of skin with leucophores will look white in white light, green in green light etc.. Leucophores are often arranged in high density and very specific patches of skin which produces the appearance of white stripes or spots on the skin. Like a white canvas peaking through colored paint, these leucophores arranged in dense patches help to create high contrasting patterns against the colors produced by the chromatophores and iridophores [2,3,4,5].

Color, however, is only part of the guise. Coleoids can even manipulate the papillae on their skin to create bumps and spikes that help them to blend into textured backgrounds. Adding texture to the disguise also makes edges harder to identify and reduces a predator’s ability to spot the outline of a body [3,6].

Those Cephalopods must really have an eye for color

Presumably, effective camouflage relies on 1) an accurate assessment of the tactile and visual information in the surrounding environment and 2) using this information effectively to hide. Cephalopods master these steps using 3 lobes in the brain: the optic lobe, the lateral basal lobe and the chromatophore lobe. The exact details of how the 3 tier pathway works, however, remains largely unknown. The general assumption is that the optic lobe receives information about the environment, processes that information, and then uses it to dictate a motor plan. The motor plan determines how the chromatophore organs should be manipulated to achieve the desired “look”. Motor neurons in the chromatophore lobes of the brain then put the plan into action sending commands to the radial muscles that artfully execute the coordinated stretching and relaxing of pigment across the skin. The role of the basal lobe is particularly poorly understood but the lobe may function to fine-tune the motor plan [2].

The biggest mystery of all, however, is that cephalopods are thought to be colorblind! The human visual system has two main types of photoreceptors that allow us to see in dim light (via our rod cells) and to observe color (via our cone cells). For color vision, objects in our visual scene reflect light at different wavelengths and this light gets absorbed by our cone cells. Because we have three different types of cone cells, each sensitive to different wavelengths of light, our visual system is able to combine information from all three types of cones and determine the color of the object in front of us. In contrast, the cephalopod eye contains only one type of photoreceptor. With such a stripped down system, cephalopods may only be able to experience a monochromatic world [7]. But how is this possible? There are multiple theories to explain how coleoids are able to use color so effectively despite only having one type of photoreceptor.

One theory is that cephalopods may not use color information when devising their motor plan for camouflage. Instead, the light reflecting cells in their skin (the iridophores and leucophores) may provide a “good enough” color match. The chromatophores can then cover up these imperfections by producing a specific pattern (i.e. stripes, a mottled look etc.) that distorts their body lines and allows them to disappear into the background. According to this theory, the optic lobe may process information on light intensity rather than color. Light intensity will reveal brights spots and shadows in their surroundings which can then be used to select an effective body pattern [8].

More recently, a father-son science duo proposed a more offbeat idea. The crux of their theory relies on a phenomenon many of us have experienced after visiting the optometrist. Post pupil dilation, you may have noticed that in addition to objects getting blurry, they may also appear to have an odd rainbow hue around them.

In short, most visual systems in the animal kingdom perceive color by detecting different wavelengths of light. With only a single type of photoreceptor in their eyes, how exactly cephalopods get wavelength information is still up for debate yet their incredible ability to use color for disguise is indisputable.

What about other party tricks?

Cephalopods often use camouflage in moments of threat as a tactic to escape. There are also, however, many examples of cephalopods using bodily changes in color and texture for communication [2]. Some of the more devious cephalopods may even use it to cheat the social system. For instance, a group of male cuttlefish, dubbed the “sneaker males,” can change their coloration and physique to mimic a female cuttlefish. Disguised as females, sneaker males are then able to nonchalantly approach a female and attempt copulation without getting attacked by other males. Some sneaker males can even achieve partial transitions in which they modify their coloration to appear male on one side of their body and female on the other [12,13]. As a result, sneaker males can strategically position themselves with their female facade facing a rival male and their “male side” facing a prospective mate. These sneaker males are the ultimate con artists that manage to avoid conflict with rival males while still reaping the benefits of female courtship [12,13].

In summary, although the advent of Instagram filters and photoshop may have done wonders for our dating profiles, our skills in visual deception pale in comparison to cephalopods.

← How long have we been sleeping? A critical point about the brain →