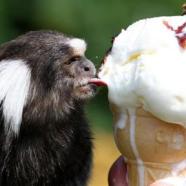 Inhabiting a complex and noisy environment in the Brazilian forest, the common marmoset faces a continuous challenge to successful vocal communication. Much like having a conversation in Grand Central Station at rush hour, the marmoset has to strategically monitor its acoustic context and structure its calls accordingly. Understanding how these animals use various cortical systems in order to communicate can help us understand how the brain functions to concurrently analyze and produce sound. Dr. Cory Miller, an Assistant Professor of Psychology at UCSD, is committed to determining how these marmosets communicate and what neural structures are involved.

Although Old World monkeys such as macaques have a prevalent history in neuroscience, such species are significantly less vocal than marmosets. “These species have been targeted more historically primarily because it is logistically easier to study them,” Miller says. While baboons and macaques are large animals that live in open areas like grasslands, marmosets are small animals that live up to 30 meters up in a dense forest. Furthermore, because Miller intends to understand the neural basis of natural behaviors in neocortex, “it is necessary to record neural activity from animals that are freely moving.”

Still, these factors have not stopped Miller from pursuing his research. Using a combination of behavioral and functional neuroanatomy techniques, Miller is particularly interested in antiphonal calling, a natural vocal behavior that is the main type of long-distance reciprocal interaction between marmosets. Unlike the stereotyped calls made by songbirds, which have been well characterized, antiphonal calling in marmosets is a relatively new model for auditory behavior. Miller feels strongly that studying marmosets will complement studies from the macaque literature: “Marmosets have the advantage of providing a wider range of behavioral contexts in which to address neurobiological questions… With the advent of the various molecular techniques being utilized, marmosets may hold particular advantages for further development of these methods in a primate model.”

Miller’s earlier work helped characterize the communication between marmosets, demonstrating that antiphonal calling engages both the auditory and motor systems, as well as the cognitive neural systems involved in decision-making and categorization (Miller & Wang, 2006). By placing the marmosets in different social environments, Miller has investigated the importance of the timing of calling, contextual noise, and reciprocity of communication, providing evidence that “common marmosets possess a level of sophistication in control over vocal production that has not been previously reported in non-human primates” (Miller & Wang, 2006; Roy et al., 2011).

While most research about the primate cortex comes from a particular approach – macaques restrained in chairs performing a limited set of behaviors – Miller is a strong promoter of the neuroethological approach: “The main message, I hope, is that much can be learned about the neural mechanisms underlying primate behavior, and the related perceptual and cognitive processes, by implementing a broader diversity of behaviors.”

If you want to know more about what happens when marmosets call, don’t miss Cory Miller’s upcoming talk, the final segment of the 2011-2012 UCSD Neurosciences Seminar Series.