Posted by UCSDNeuro on November 4, 2012 in Journal Club, Seminar Series | Leave a comment

Paraneoplastic neurologic disorders (PNDs) represent a rare class of neurodegenerative diseases that arise in the presence of cancer. The disorders are believed to stem from an immune response against certain tumor and neuronal antigens (onconeural antigens). The generation of onconeural antigens is a double-edged sword—while acting as an effective antitumor response, the antigens also generate an autoimmune attack on brain tissue expressing that protein. Over the years, the work of Dr. Robert Darnell has already identified two PND target antigens, two neuron-specific families of RNA binding proteins known as Nova and Hu.

While RNA binding proteins (RNABPs) are widely expressed in the central nervous system, their RNA targets and function are still unclear; furthermore, most of the techniques used to uncover targets of RNABPs only give a partial, biased picture of RNA-binding sites. Dr. Darnell’s lab has developed HITS-CLIP (high-throughput sequencing of RNA isolated by crosslinking immunoprecipitation), a useful and widely applicable tool for determining unbiased, genome-wide protein-RNA binding interactions in vivo. The method consists of covalently cross-linking RNA-protein complexes followed by immunoprecipitation. The bound protein is then removed and the remaining RNA is sequenced. Already, Darnell and his colleagues have used this technique to understand important functions of Nova, now recognized to regulate alternative polyadenylation in the brain.

In a recent paper published in Neuron, Darnell and his lab members sought to understand Hu, an RNABP family sharing significant homology with the Drosophila ELAV (embryonic lethal and abnormal vision) gene and a target antigen identified in PND. Also termed as Elavl (Elav-like), three family members—Elavl2, Elavl3, and Elavl4—have further been identified as neuronal-specific (nElavl). While previous research demonstrated that nElavl proteins regulate alternative splicing in mammalian cell lines (Lebedeva et al. 2011), the function of nElavls in the mammalian nervous system remains unknown. Using Elavl3;Elavl4 double knock-out mice, splicing-sensitive microarrays to determine alternative splicing patterns, and HITS-CLIP to identify transcripts directly regulated by nElavls, Darnell determined how nElavl binding regulates transcript quality and quantity (Dunn et al. 2012). As shown in Fig.5A, locations of nElavl binding were mapped onto a composite pre-mRNA transcript. The exons in gray are constitutively expressed whereas the red exon represents the alternative exons. This map demonstrates that the majority of nElavl binding sites are located not only in introns flanking the alternative exon but also very close to the intron/exon junction; furthermore, nElavl binding seems to determine to the 5’ splice site of the downstream intron promotes inclusion of the alternative exon (red peaks) whereas nElavl binding to the 3’ and 5’ splice site promotes exclusion (blue peaks) (Fig. 5B). In addition, nElavl proteins appear to preferentially bind U-rich sequences (Fig. 5B and 5C).  When looking at the function of these pre-mRNA transcripts regulated by nElavl, many were involved in the regulation of cytoskeleton dynamics. 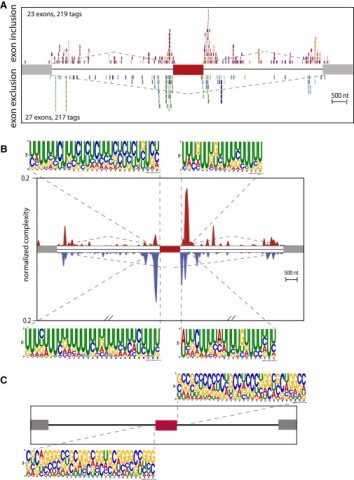 While nElavl showed strong intronic binding of pre-mRNAs, it was also demonstrated that a large majority of nElavl binding occurred in the 3’ untranslated region (UTR) of mature mRNAs, suggesting that nElavl may regulate mRNA levels. By comparing transcript levels in WT vs Elavl3;Elavl4 knockout mice, researchers discovered that the steady state mRNA levels of 119 transcripts. Importantly, many of these transcripts are involved in basic biosynthetic pathways. Furthermore, researchers observed a strong enhancement of genes regulating the synthesis of glutamine. When looking at total cortical glutamate levels, double KO mice showed a 50% reduction compared to WT (Fig.6F).  Glutamate synthesis is primarily reliant on the glutaminase enzyme, which has two mRNA isoforms (short and long). In the pre-mRNA of the enzyme, nElavl binds to intronic regions regulating the inclusion of the short or long C-terminal domain as well as the 3’ UTR of both isoforms (Fig. 6A). As detailed in Fig.6, the loss of nElavl reduces expression of the long isoform mRNA as well as protein levels of both isoforms. Together, these results suggest that the two mechanisms of nElavl binding—alternative splicing and regulation of mRNA—are synergistically applied to regulate a major excitatory neurotransmitter found in the brain.

In short, these findings demonstrate that nElavl plays a role in alternative splicing and steady-state levels of mRNA when binding to pre-mRNA and mature mRNA, respectively. Furthermore, the combination of these mechanisms in regulating the two isoforms of the glutaminase enzyme suggests that the two regulatory mechanisms of nElavl are not mutually exclusive; instead, they may act together to regulate the balance of excitation and inhibition.

Please join us for the sixth installment of the 2012-2013 Neuroscience Seminar series at 4 pm on Tuesday, November 6th in the CNCB Large Conference Room, as Robert Darnell shares his insights into the regulatory role of RNA-binding proteins.

Claire Geddes is a first year in the neurosciences Ph.D. program. She is completing her first rotation with Dr. Nicholas Spitzer.

← How mice decide: Stimulation of striatal D1 and D2 neurons bias choice in opposite ways Periphery-derived TGF-β signaling orchestrates the formation of topographical maps in the brain →