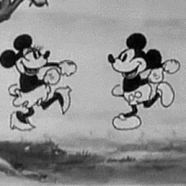 Posted by kkiritah on November 19, 2013 in Uncategorized | Leave a comment

I enjoyed a lot of random things at SfN this year.  For example, I enjoyed composer Bruce Adolphe’s preview of a new piece for piano and orchestra, inspired by a discussion between bipolar patient (piano) and therapist (orchestra), which will be performed by the New York Philharmonic in 2015.  I also enjoyed the way Eric Kandel says “aplysia” (a-pliss-ia) and learning that Tony Grace‘s license plate is DOPAMNE.  Dope!

But of the random things I enjoyed, the most exciting (and scientific) was watching a flashing light stop an angry mouse mid-attack.  I thought it was hilarious.

Viewers are kindly requested not to upload the supplemental movies to publicly accessible sites, so I will share this gif in their place and refer you to the Supplemental Information section of the article on Nature.com

As you can imagine, it was also fascinating.

The video was played during David Anderson’s talk, “The Neurobiology of Sex and Violence.”  In the article, “Functional identification of an aggression locus in the mouse hypothalamus,” Lin et al. identified an “aggression locus” in the hypothalamus, the almond-sized region below the thalamus and above the brain stem famous for its function in the “Four Fs”: fighting, fleeing, feeding, and um… fornication.  Using optogenetic stimulation of the ventrolateral subdividison of the ventromedial hypothalamus (VMHv1), the scientists caused the stimulated mice to attack poor intruder mice, including females and castrated males, who the un-stimulated male mice are rarely compelled to attack.  Stimulation also caused a wild and silly attack on an inflated glove, which is an inanimate object. 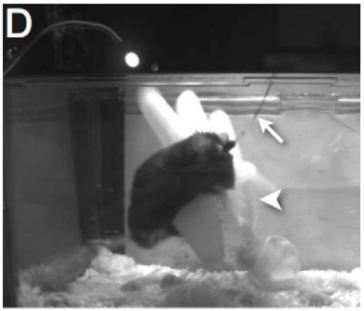 Dr. Anderson also revealed some unpublished data illustrating an important role for neurons expressing estrogen receptors (estrogenR+) in the VMH.  Interestingly, varying levels of optogenetic stimulation to the same exact estrogenR+ neurons in the VMH can result in either mating or aggressive behavior.  Two very different behaviors controlled by stimulation of THE SAME NEURONS!  How does this work?  They are not sure.  But it’s pretty cool and kind of funny to watch a mouse go from love to hate just by increasing the intensity of stimulation.