As an attendee at the 5th annual Society for Neurobiology (SNL) conference, four years had passed since my first exposure to the meeting–a discussion of the state-of-the-art research being done on the neuroscience of language processing. In those four years, things have happened! This meeting left me marveling at new advances and the number of presenters successfully using new technologies. Techniques of note included ECoG (electrocorticography) (1), TMS (transcranial magnetic stimulation) (2), and even pharmacological studies reaching down to the molecular level investigating speech perception of babies in utero (3).

This latter method was employed by the esteemed Professor Janet Werker, who presented the Elizabeth Bates Memorial Lecture. Professor Werker has a long track record of studying how infants and children learn to perceive the segmental (e.g., consonants) and rhythmical properties of their native language (4). There appear to be sensitive periods in development for learning distinctions between sounds that occur in their own language, as well as for perception of contrasts that do not occur in the language(s) they are exposed to. At the onset of life, many distinctions can be made as the system appears to be at its most plastic–infants could learn the sounds of any human language they are exposed to. Eventually, the system becomes “tuned” to the sounds that are used in the native language (or languages) of the child (5, Figure 1). At six months, infants can still perceive many non-native consonant contrasts, but by 10 months, this ability has been lost (6). However, some plasticity in the system remains for several years. For instance, children who are internationally adopted as toddlers learn language in roughly the same developmental patterns as infants (7) (and, as Werker’s and others’ research begins to suggest, reinstating certain biological environments may even allow for induction of plasticity in adulthood). 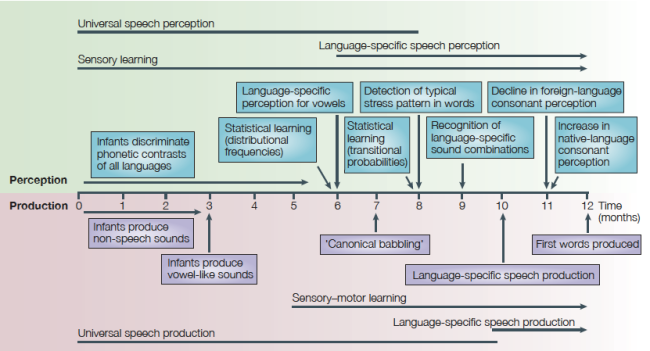 The contributions of maturational and also environmental factors for such “critical periods” are of high concern for language development researchers. To investigate some of these environmental factors, Werker’s new study (3) turned to pregnant women who were suffering from depression. Critically, Werker’s research asked whether depression or medication for depression might have effects on infants’ developing linguistic abilities. These factors may change the biological environment of the developing infant both during pregnancy and after birth (particularly if the child is breastfed).

Figure 2. A child stares at a screen during the habituation paradigm. In a habituation phase, children are presented with a sound until they no longer pay attention to the checkerboard on the screen (here, the sound “da”, with an English consonant /d/). Then, they are presented with another sound (here, “Da”, with the retroflex consonant /D/ found in Hindi). If infants perceive the difference, they should return to looking at the screen. If they hear no difference, their behavior should not change from end of the the habituation phase. (Source: Janet Werker’s website, http://infantstudies.psych.ubc.ca/)

Some mothers diagnosed with depression during pregnancy opt to deny pharmaceutical intervention. However, others choose to take selective serotonin re-uptake inhibitors (SSRIs), which are known to increase the amount of the neurotransmitter serotonin (a mood modulator) in the synaptic cleft. Some SSRIs are approved for use during pregnancy, even though there are associated risks. With three groups of participants (mothers with no or few symptoms of depression, mothers with depression taking no medication, and mothers with depression taking SSRIs), Werker investigated the ability of infants (both pre- and post-natally) at various ages to discriminate certain types of consonants (in utero) and to do a nonnative speech task (at 6 and 10 months of age; see Figure 2).

Typically-developing children performed normally on tasks at 6 and 10 months of age, succeeding at the nonnative speech sound task at 6 months but failing at 10 months. However, when mothers were depressed, infants appeared delayed or abnormal in their perceptual abilities, failing at the task at 6 months of age but succeeding at 10 months of age, a finding suggesting that these infants were developmentally delayed. On the other hand, infants whose mothers had depression and were treated with SSRIs failed at the task at both ages, providing suggestive evidence that their ability to make nonnative distinctions had already passed (see Figure 3).

Figure 3. Results from the Werker infant study. The control group discriminates nonnative contrasts at 6, but not 10, months of age. Babies of depressed mothers (not taking SSRIs) fail to discriminate this contrast until 10 months of age, and babies of mothers taking SSRIs do not discriminate at either age. (Source: Ref. 3, Figure 2)

To follow this up, Werker looked at babies who were and were not exposed to SSRIs in utero to see if they showed evidence of early onset of a different developmental marker. In such experiments with fetal babies, a speaker is placed near the mother’s belly to present auditory stimuli while the heartrate of the baby is monitored. A change in heartrate upon presentation of a new sound following habituation can be taken as evidence that the fetal infant can detect a change in sound. For instance, fetal infants at 36 months can discriminate vowel sounds like /i/ and /a/ (8). Using a native-language consonant discrimination task (which babies typically cannot discriminate until after birth), Werker found that the babies treated with SSRIs outperformed babies from the control group. Whereas typically developing babies discriminated only vowel sounds at 36 weeks gestation, babies of mothers taking SSRIs were already able to discriminate native consonant contrasts, something that typically does not happen until after birth.

The practical implications of this research are still unclear. It is not obvious that “turning off” fine discrimination abilities earlier in life would always be beneficial–or that it would be detrimental. What is interesting is that the pattern of developmental stages seems identical across groups, even though age at onset of different stages may differ. That biochemical environment plays a crucial role in the induction of language development is perhaps not so shocking if one considers research from other domains. Previously, altering levels of antidepressants has been shown to change plasticity in visual cortex areas in adults (9). The molecular mechanism through which this occurs is underspecified, but new research shows that GABA (inhibitory) circuitry is a likely candidate (10).

Taking a stab at the question of how such plasticity for speech learning is induced, a poster at the SNL meeting took a genetic approach by looking at homologous regions in brain areas involved in speech (in humans) and vocal learning (in song-birds). Prof. Erich Jarvis along with research Andreas Pfenning and other colleagues have been mapping the brains of birds across species (11, Figure 4). They found high convergence of gene expression across songbirds and humans in the laryngeal motor cortex and the basal ganglia–two regions important for vocal learning in songbirds and speech in humans. At a molecular level, certain products thought to be involved in plasticity were up-regulated in these areas compared to surrounding areas of the brain not involved in vocal learning or speech. This distinction was not observed for non-vocal-learner birds.

So where does that leave us as researchers? Making some progress at answering some basic questions about plasticity in early language development, I’d say. Understanding how the brain builds up and represents language’s building blocks (12), starting from sounds like consonants and moving up to whole conversations, needs to be a key focus of language researchers in the coming years.