Posted by kkiritah on November 29, 2013 in Uncategorized | 2 Comments

Now that Thanksgiving is over, how are you feeling?  Are you still sleepily savoring the leftover turkey and stuffing from last night’s dinner?  Or have too much family time, traffic, and consumerism of Black Friday brought the onset of the holiday blues (Goin, 2002)1?

In a recent study on the effects of the Thanksgiving holiday on the well-being of college students (lol), Allan et al. (2013) found that the holiday (from Thursday through the following weekend) decreased life satisfaction and positive affect.  Womp womp!

Like Kristen Bell, Thanksgiving seems happy, but it is actually sad.

Thankfully, this was a study of gratitude, and the authors found that the negative effects of Thanksgiving can be counteracted by giving thanks!  Sort of.

Each night for three weeks, including the Thanksgiving holiday, participants (N=172, mostly women) had to complete an online survey about their mood, well-being, and gratitude.  Compared with other days in the study, the students reported (on a 1-5 scale) a significantly greater average gratitude and positive affect2 during the Thanksgiving holiday.  After doing some math, the authors found (not surprisingly) that the relationship between Thanksgiving and life satisfaction varied by participant.  They also found that when daily fluctuations in gratitude over the three-week period were controlled for, as I mentioned above, daily life satisfaction and positive affect were actually lower during the holiday.  In addition, there was a nearly-significant negative relationship between Thanksgiving and “meaning of life.”  That means the students felt their lives were less meaningful on Thanksgiving (and this result is only nearly significant!).  How sad for everyone!

Before controlling for gratitude, there were no significant differences in measures of life satisfaction, meaning of life, or negative affect over the three-week period.  Overall, however, average daily gratitude was positively correlated with average daily life satisfaction, meaning, and positive affect.  Happily, this means that people who were more grateful in general were likely to have experienced increased well-being over the holiday!

Logically, this means that if you are a grouch today, you are probably doing this holiday wrong… Be thankful!!!  This advice, of course, is not limited to Thanksgiving.

If we are going to talk about gratitude, we cannot ignore the work of Dr. Robert Emmons and colleagues.  In 1993, Emmons and McCollough published what is probably the most cited study in gratitude literature.  Given the impact of its findings, I feel it is my duty to report their findings to you here in more than just one sentence (for example, in this happy talk on positive psychology!).  Below are some details about the three studies discussed in their report.  If you don’t care much for the science, look for the main findings in italics!

Tasks/groups: Weekly reports on mood, physical symptoms, time spent exercising, and overall life appraisal, as well as one of the following lists:

Results: The Blessings task elicited (as you might expect) significantly more gratitude than the Hassles task!  Participants in the gratitude condition (Blessings) rated “life as a whole” and their expectations for the upcoming week more highly than did the participants in the other groups.  Excitingly, the Blessings group also experienced fewer symptoms of physical illness and spent significantly more time exercising!  There were no effects of group on positive or negative affect.

JT and TSwift LOVE these findings!!!

Study 2: Count your blessings more than just once a week (and for more than 2 weeks)

Groups/tasks: Reports were the same as in Study 1, but daily instead of weekly and with a different control group (3) :

Results:  The Blessings task elicited even more gratitude in this study than in Study 1.  Positive affect was also higher for the Blessings group than for the Hassles group, and the Downward Social Comparison group was insignificantly in the middle.  Using mediation analysis (sounds fake but it’s not), the authors found that the increase in positive affect was the result of the increase in gratitude.  Finally, those who were in the Gratitude group were also more likely to provide emotional support to others!  (And they were probably thanked… what goes around comes around!)  Unfortunately, there were no differences in physical health complaints nor in time spent exercising.  The authors blame the short duration of the study.

Study 3: Count your blessings, even if you are not a college student.

Tasks/groups: Basically the same as in Study 2 but with different groups…

Results: The Gratitude condition elicited increased gratitude and positive affect and decreased negative affect, which had not been previously observed.  The Gratitude participants felt significantly better about life as a whole and the upcoming week than the Control group.  The Gratitude group felt more connected with others, got more hours of sleep, and felt more refreshed upon waking.  Gratitude is good for sleep!  As in Study 2, there were no differences in physical health or exercise, possibly the fault of the short duration of the study—so if you are going to try this experiment yourself, stick with it for more than three weeks!

If you are not convinced, several other studies have been done since 1993 to corroborate this evidence.  For an extensive review on gratitude research, I recommend Wood, Froh, & Geraghty (2010).

The Upward Cycle of Gratitude and Memory

So where is the neuroscience behind all this?  Well, gratitude is thought to cause happy feelings, right?  So gratitude probably leads to the release of our friend dopamine, which your brain likes.

Dopamine is not only good for making you feel good, it is also good for making good memories (Wise, 2004).  Therefore, I will argue that it is likely that  gratitude will improve your memory.  BOOM.

Dr. Philip C. Watkins argues the same in his new book “Gratitude and the Good Life” (though without mention of a specific neurotransmitter mechanism).

Below is Watkins’ theoretical model of the “upward cycle” between gratitude and positive memories, which leads to an overall increase in well-being: 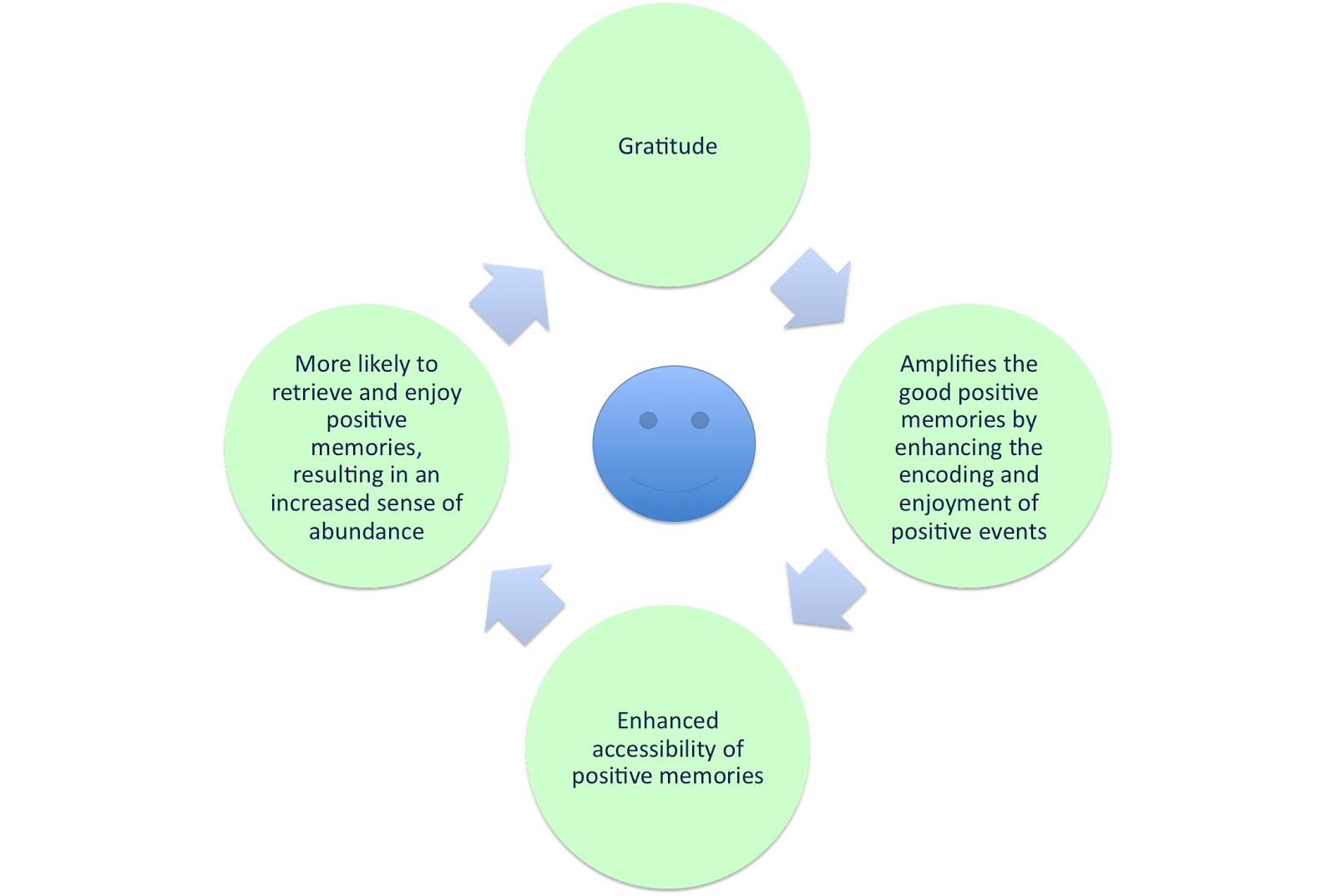 This just warms my heart.  Or makes it more coherent or something:

In my final attempt to make you thank me, I will leave you with this: McCraty et al. (1995) found that heart rhythms are erratic during anger, frustration, and anxiety.  Positive emotions, including appreciation, can lead to more coherent heart rhythms, causing more synchronization between the sympathetic (“fight-or-flight”) and parasympathetic (“rest & digest”) branches of the autonomic nervous system and a shift toward parasympathetic activity.  These effects may help treat hypertension and prevent sudden death in patients with congestive heart failure and coronary artery disease! 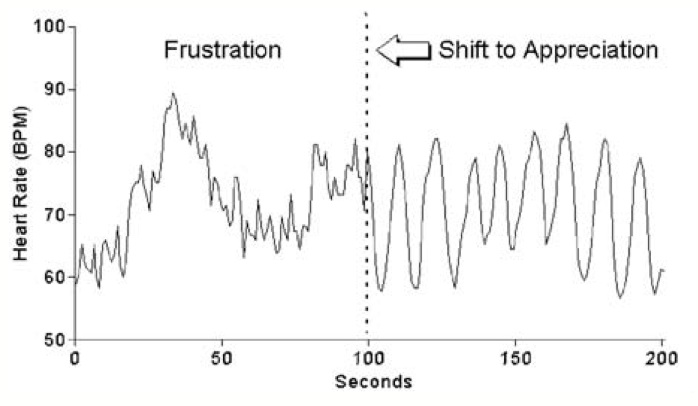 1 Allan et al. (2013) report that, while some studies support the myth of the holiday blues with increased rates of suicide during the national holidays, most studies do not support this finding.  Allan et al. (2013) provide a list of references for the curious, though I admit to have only looked at one: Bridges (2004).  Bridges found that from 1972 to 1993, while homicide rates were higher on all major national holidays (New Year’s, Memorial, Independence, Labor, Thanksgiving, Christmas, and New Year’s Eve) except for Memorial Day, suicide rates were lower on all holidays except for New Year’s Day.

2 “positive affect”: composite measure assessed with seven items, including relaxed, proud, and happy.  For more information about these assessments, see Steger et al. (2008).  It’s very interesting and taught me the word “eudaimonia,” which is a condition of well-being, which is a more profound and noble than hedonic well-being, and according to Fredrickson et al. (2013) have very different gene expression patterns due to differences in transcription factor activity. (“The finding that hedonic and eudaimonic well-being engage distinct gene regulatory programs despite their similar effects on total well-being and depressive symptoms implies that the human genome may be more sensitive to qualitative variations in well-being than are our conscious affective experiences.”  Deep or BS?)

← Tuckered Out By Turkey’s Tryptophan? Controlling the brain with lasers! →