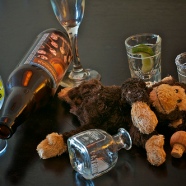 12 drinks a day make the brain go away

More alcohol is consumed on New Year’s Eve than any other day of the year. That bottle of champagne may seem like the perfect way to ring in another year of health and happiness, but is it really the smartest choice for optimal brain health? Tales abound that drinking alcohol rots the brain and is a surefire way to drop a few IQ points. Are these claims justified by neuroscience research, or are they simply scare-tactics promoted by fear-mongering prohibitionists?

Does alcohol really damage the brain?

If you’re planning a carefree night of binge-drinking this New Year’s Eve, you might want to hold off reading the rest of this article until January 1; a new study 1 provides compelling evidence that excessive drinking is indeed detrimental to the brain. Although prior studies have reported correlations between chronic alcohol consumption and brain shrinkage 2,3, it has been challenging to rule out confounding lifestyle or environmental factors, such as nutritional deficiency, psychiatric disorders or intake of other drugs. Given the ethical considerations of forcing alcohol consumption on humans, conclusive evidence of a causal relationship between drinking and brain health has been lacking. By studying alcohol consumption in monkeys, this study is the first to suggest that chronic binge drinking (and boy, were those monkeys binging!) directly causes brain atrophy in primates.

How much does a binge-drinking monkey drink? 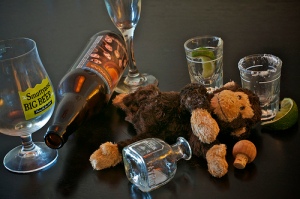 To test whether voluntary drinking alters brain size, the researchers trained 18 adult monkeys to consume alcohol every day for three months. Over the next year, they gave the monkeys free reign to consume alcohol ad lib (with free access for 22 hours each day), while monitoring their daily intake. The monkeys were also provided adequate food and water to minimize concern over dehydration or malnutrition.

Over the course of the year, the monkeys consumed an average human equivalent of 9.6 drinks each day. However, alcohol consumption was highly variable across monkeys, ranging from the equivalent of 1 to 17 daily drinks. The younger the monkey, the more alcohol he consumed, suggesting that alcohol exposure in youth may increase vulnerability to excessive drinking. To characterize the relationship between alcohol consumption and structural brain changes, the researchers identified six monkeys as heavy drinkers who consumed greater than 12 drinks a day, and the remaining twelve as light drinkers, based on prior findings that voluntary alcohol intake above this cutoff predicts chronic heavy drinking 4.

A shrinking cortex … and an expanding hippocampus?

Next, to assess how a year of binge drinking affects brain structure, the researchers performed magnetic resonance imaging on the monkeys before any alcohol exposure, and again after six and twelve months of daily alcohol intake. After both six and twelve months of drinking, cortical gray matter volume was reduced (by about 1% at both time-points) for heavy, but not light, drinkers. Across all of the monkeys, higher alcohol intake predicted more extensive cortical atrophy. Monkeys underwent the most severe brain volume reductions during the first six months, undergoing 0.11% volume loss per daily drink at six months, and 0.08% at twelve months.

The researchers more closely examined structural changes in several brain subregions. They observed an odd pattern in the hippocampus, a structure known to be important for forming memories 5. Although hippocampal volume didn’t change for heavy drinkers, it unexpectedly increased after twelve months of light drinking. What could possibly cause this paradoxical alcohol-induced brain expansion? The researchers propose that it may reflect inflammation or an increased rate of neurogenesis – the birth of new neurons – in response to the stress of chronic drinking. While only speculative, this hypothesis is certainly feasible, given that the hippocampus – but not the surrounding cortex (which demonstrated atrophy, rather than expansion) – is one of the few brain regions known to undergo neurogenesis throughout life 6.

To binge, abstain, or something in between?

Do these findings offer conclusive evidence to add drinking to the growing list of risk factors (such as aging, neurodegenerative disease, head trauma, malnutrition or depression 7-11) for brain atrophy? While the results are convincing that heavy, chronic alcohol intake negatively affects brain structure, the consequences of light drinking are less clear. While a year of casual drinking may not cause brain volume loss, we can’t conclude that it doesn’t alter the brain in yet unseen ways. Might shrinkage occur over a longer time scale? Or, as some research suggests 12,13, might a drink or two a day actually serve as a brain boost?

Before extrapolating these findings to ourselves, it’s important to remember that a binge-drinking human is a far cry from a well-fed, laboratory-housed, alcoholic monkey. While these findings support the existing evidence that heavy drinking is detrimental to the human brain, we cannot yet directly translate them to human rates of drinking and brain atrophy.

With this new knowledge, what can we do maintain a healthy brain in 2014? Go ahead – indulge in that champagne toast at midnight … but pair it with a resolution to keep the binging to a minimum.