Home » Cognition » Main-lining the Secret Truth of the Universe: Pessimism and the Brain (part 1)

Main-lining the Secret Truth of the Universe: Pessimism and the Brain (part 1)

Posted by erikkaestner on April 10, 2014 in Cognition, Decision-Making, Neuroscience | 1 Comment

Cohle: I’d consider myself a realist, alright? But in philosophical terms I’m what’s called a pessimist.

Hart: Let me tell you, you ain’t great outside of parties either.

A friend in college told me that she only felt like she knew the truth when she was depressed and that when she was happy she assumed she her brain was fooling her. Now, college is full of 18-year-olds spouting nonsensical ideas to each other late into night, but of all the things I heard during that first year of college her statement has stayed with me. The idea that the brain would represent information differently during different states of mind, and that one state might be superior to another for deciphering truth, troubles me. It seems obvious that as humans we should prefer to feel happiness and contentment; but there are people out there who argue that sadness and gloom should be the preferred states of mind.

It would be safe to say that the character Rustin Cohle (from whose quotes the title and opening conversation are lifted) would agree with this gloomy assessment of reality. In the fictional world in which he exists, Cohle sees many things that others cannot. And my college friend and this fictional character are not alone in their praise for feeling bad.

But how accurate are their feelings of superiority? Is there a cursed group of individuals wandering the earth, equipped with the power to see the truths the rest of us cannot at the price of always feeling a little down?

The majority of humans would be classified as optimists, and in fact ample evidence exists that humans are unrealistically optimistic (3, though see 4 for a different perspective). In a variety of experiments, humans have been found to: rate negative future events as less likely to happen to themselves than the average person and positive events as more likely to happen to them than the average person (5); overestimate their skill relative to their peers (6); underestimate their likelihood for getting a divorce (7); overestimate their ability to get a job (8); and believe they will complete projects faster than they actually can (9). Admittedly the majority of these findings have been done on 20-somethings in college, and these findings may be dependent on culture as in general people in the stereotypical ‘West’ (e.g. Canada & the U.S.) appear to show greater unrealistic optimism than people in other regions such as Japan  (10,11). However, within groups in the ‘West’ the optimism bias appears to be stable across age, occupational, and educational groups (12).

So if the majority of people, at least in certain cultures, are unrealistically optimistic, does being pessimistic protect against this bias? In fact, studies have found that while very depressed people have a pessimism bias, people with minimal depression were the most accurate at judging their future prospects (13, 14, though see 15) and a meta-analysis of the literature found some evidence to support the existence of ‘depressive realism’ (16). Future research may either confirm or fail to replicate these early findings, but it does present early evidence that slightly depressed people do indeed see life more truthfully. 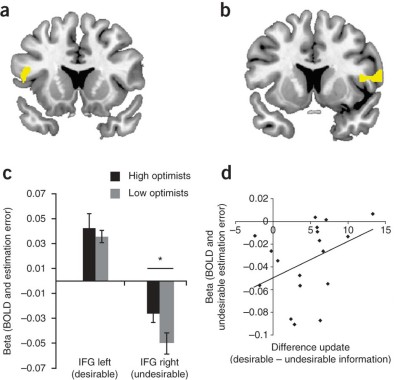 Figure 1. This is an illustration of one neural mechanism which may underlie the difference between optimists and pessimists. A)Brain region in the left IFG that increases activation during updating of beliefs in a more positive direction. B) Brain region in the right IFG which showed decreased activity during updating of beliefs in a negative direction. C) Comparing people who ranked high and low on optimism shows no difference when in the left IFG when updating positive beliefs, but pessimistic participants  showed a greater decrease in the right IFG when updating negative beliefs D) A correlation of the update bias (a more positive number means a more optimistic bias) and activity in the right IFG. The more people showed an optimistic bias, the less their activity in the right inferior frontal gyrus tracked negative updating.

In a study asking people to imagine future events, greater fMRI activation was observed in the amygdala & anterior cingulate cortex for positive versus negative imagining of future experiences (23). The activation in the anterior cingulate cortex for each individual was correlated positively with behavioral measures of optimism (assessed using a questionnaire), suggesting this brain area has an important role in modulating future expectations in a positive direction. In another study, the amygdala & anterior cingulate cortex were found to be more sensitive to positive stimuli in people focused on optimistic thinking but more sensitive to negative stimuli in people focused on pessimistic thinking (24), suggesting these regions’ potentially differing roles depending on whether one is an optimist or pessimist.

Another brain region which could account for differences between optimists and pessimists is the inferior frontal gyrus (IFG), which may have differing functions for the left and right side. A study found that when updating beliefs in a positive direction (finding out the world is better than you thought) optimists and pessimists show similar activation in the left IFG. However, when updating beliefs in a negative direction (finding out the world is worse than you thought) pessimists show a significantly larger decrease in activation in the right IFG compared to optimists (25; Figure 2). Several additional studies have tied processing in the right IFG to pessimistic thinking. In one, participants were shown either negative, neutral, or positive stimuli and in some trials were told beforehand which type of stimuli they would be seeing and in other trials they did not know what was going to be shown. The researchers found increased activity in the right IFG when participants were expecting to view negative pictures and also when they did not know what type of picture to expect. The worse the participant’s mood (again, assessed by a questionnaire), the higher the activation in this area (26). In a study that used a technique called Transcranial Magnetic Stimulation (TMS)–which can be used to stop function in areas of the brain for a short period of time–it was found that using TMS the left IFG caused people’s behavior to resemble a pessimistic bias. Remember that in the study about updating beliefs, the left IFG was important for updating beliefs in a positive direction, so stopping function in this region appears to increase pessimism. Patients with unilateral lesions in the frontal cortex further reinforce a left/right difference as patients with damage to the right prefer riskier decisions (are more optimistic about their chances) compared with patients with damage to the left side (27). Further left/right differences in behavior depending on which side is damaged in lesions and epilepsy have led to some researchers to posit a general left (optimism)/right (pessimism) difference in the brain (1).

Neurotransmitter systems in the brain also could differentiate optimists and pessimists. The neurotransmitter dopamine has been implicated as important for maintaining the positive bias, as participants who increased the amount of dopamine in their brain using the medication L-DOPA were found to have increased optimistic bias (28). Dopamine has also been found to be important for optimism in other animals; optimistic pigs (as identified by the ambiguous cue test which will be discussed in part 2) had increased dopamine in the frontal cortex compared to their less optimistic peers (30). Serotonin dysfunction has been implicated in pessimistic biases in humans (31) and animals as well; administering serotonin inhibitors to sheep causes them to become more pessimistic (32). The dopamine (optimism)/serotonin(pessimistic) differences provide another angle for researchers to probe the brain differences between pessimists and optimists.

Here ends the first part of our exploration of the differences between optimists and pessimists. So far, we have learned about an unrealistic optimism bias that pervades some cultures, how pessimists may indeed have a clear view of the world, and how differences in the brain could explain the differences in thinking between the groups. In part 2, we will explore potential causes for some people to become pessimists, health and mental well-being differences between pessimists & optimists, and potential ways to improve a pessimistic outlook. Or maybe a comet will hit me and I will never get around to posting part 2.

← Talkin’ 2 Myself: Eminem and the Science of Inner Speech Numbers in the brain →