Home » Education » “Every Science Story is a Detective Story” 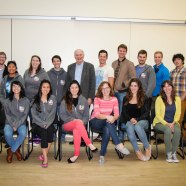 “Every Science Story is a Detective Story”

This week, UCSD, the Kavli Foundation, and the Kavli Institute for Brain and Mind hosted a visit from the amazing actor Alan Alda and fellows from the Alan Alda Center for Communicating Science,.  In addition to a public lecture and workshops for senior faculty and selected postdoctoral scholars, Mr. Alda was kind enough to take some time out of his busy schedule to sit down with members of NeuWriteSD for a conversation about science, communication, and his vision for the future.  Here’s some of what we learned!

Science Is A Story

Storytelling is one of the most primal forms of conveying information, from folklore to fairy tales to novels.  Science too can be told in the form of a story.  While every tale has a beginning, middle and end (along with dead cats, Mr. Alda noted), what gives it life and vitality are the obstacles that the protagonists must overcome to reach their goals.  The best stories all have their characters struggle towards their objectives before they finally succeed.

This holds true for science.  All of us have struggled in the lab, whether it’s buggy code or a bad reagent or that one experiment that seemed cursed from the very beginning.  When we gloss over the hard parts of science, the public loses out on the most interesting part of our story- how we struggled through the many obstacles that are thrown in our path on a daily basis. Find ways to include the wrong turns and missteps that you made on the way to your successful conclusions- it will only make your victory seem all the sweeter!

Emotion Is A Good Thing!

As scientists, we’re all incredibly conscientious of any kind of bias that may creep into our work.  Science is all about logic and reason, and in many cases there simply isn’t a place for strong emotion in our work.  But emotion is critical when it comes to communicating about science, especially to the lay public.  If you sound uninterested in your own work, then how can you expect others to be enthralled by it?  Allow the passion you feel for science to come across as you speak or write about it.  You can also make it work for you- the strongest memories are often attached to emotional events.  If you can link your science with strong feeling, there’s a much greater likelihood that the audience will remember it long after the talk is over.

The language you use is critical for getting your science across.  Even when scientists avoid using the most obvious pieces of jargon, there can still be a profound disconnect between speaker and audience because of the way terms are used. One example Mr. Alda used was the term “regulate.”  In neuroscience, we use this term to describe how one brain region or receptor or neurotransmitter can control the function of a second region or receptor or neurotransmitter.  However, this is very different to how “regulate” is used in non-scientific English.

Many scientists experience what Mr. Alda calls the “curse of knowledge”- when they know a topic so well that they have utterly forgotten what it’s like not to know anything about it.  They assume that what they’re saying is clear to their audience, because it makes total sense to them.  Using simple but clear language can help bridge the divide between scientist and public.

It’s also important to pay attention to how the person you’re speaking to is reacting to your words.  So much of communication is about body language and facial expressions.  You can tell just by looking at someone when they become lost or confused by your explanation.  Don’t let these moments pass, but use them to clarify a point, and learn from them!  Think of these interactions as experiments in and of themselves, and use them to try out new ways to explain your work and inspire interest in it.

When we asked Mr. Alda what his vision for the future of science communication was, he spoke of a world where everyone viewed science as the incredibly exciting field that it is, where scientists are as popular as athletes, and advances are reported every night on the news.  But it can’t happen if we as scientists aren’t willing to put ourselves out there and learn how to put our best foot forward.  Whether it’s taking a public speaking course, or writing a blog post, or trying out one of Mr. Alda’s suggestions here, 2015 might just be the perfect time to start your journey into science communication!

← No cerebellum? No problem! Present you vs. Future you →