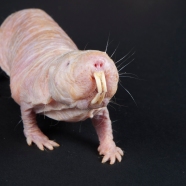 Posted by megkirch on December 22, 2016 in Animals, Evolution, Neuroscience | Leave a comment

Ugliest animal in the world. 2013’s “Vertebrate of the Year”. Co-star of Disney Channel’s Kim Possible. These are just a few of the naked mole rat’s most notable distinctions. However, the extent of their peculiarity and alienness is, if you would believe it, enormously under-appreciated. The more they

learn, scientists across the fields of biology, evolution, medicine, and neuroscience alike continue to be amazed by what the world’s most beloved (or most abhorred) nudist rodent can do.

The list of their bizarre and unique characteristics could stretch as long as their underground tunnel systems (up to six football fields!! [1]). It’s difficult to determine where they fit in the animal kingdom. They are more closely related to chinchillas, porcupines and guinea pigs than they are to either moles or rats [1], though they also bear striking resemblance to miniature pink walruses. Rather than self-regulating their internal body temperature like other mammals, they adopt the temperature of their surroundings – a feat that seems downright reptilian [2]. Moreover, their colony social system is conspicuously insect-like; they are one of only a few known eusocial mammals, which means that, like ants and bees, there is only one mating female and a small handful of sexually active males among up to hundreds of other worker and soldier mole-rats [3]. And amongst similarly-sized rodents, their average lifespan exceeds others’ by orders of magnitude, reaching about 30 years! [3].

These arguably aren’t even the naked mole rat’s most interesting features. Within the last five years in particular, these curious creatures have attracted the attention of researchers for certain super-human, or rather, super-mammal, qualities: resistance to cancer and imperviousness to pain.

Cancer and pain don’t got nothin’ on me!

Researchers noted during a multi-year long survey of a large colony of captive naked mole rats that there were expected amounts of neurodegeneration and other causes of death, but zero instances of cancer [4]. Recent work aiming to understand the molecular and genetic changes underlying this unique and highly desirable attribute have revealed that a complex sugar called hyaluronan (HA) is more than five times bigger than that in humans or mice. This gooey substance sticks between cells in the naked mole rat’s skin, making it highly elastic for ease of movement in its underground environment. But accumulation of lots of HA also triggers a signaling pathway that results in a powerful anticancer mechanism whereby cells self-destruct rather than accumulating and forming tumors [5]. Remarkably, this raises the possibility of introducing naked mole rat HA to human cells as a new strategy for cancer prevention, although we are still a long way from determining the feasibility of this approach [4].

Not only are naked mole rats essentially immune to cancer, but they also don’t experience any pain in response to acid, inflammation, or high temperatures [6,7]. Scientists are just now beginning to understand how these so-called “sabre tooth sausages” are impervious to pain, and remarkably, relatively minor tweaks to their genetic code are responsible for their exceptional superpowers. You might expect that naked mole rats’ nociceptors – sensory neurons that are specialized for pain sensation – might simply be missing some of the necessary ingredients for sensing acid. Instead, not only are all of the normal acid-sensing ion channels (specific types of proteins) found in mice also found in naked mole rats, but they are essentially indistinguishable between the different species. While the movement of ions through these channels tends to make nociceptors more likely to become active (and thus convey the sensation of pain to the animal’s brain), this effect is counteracted by other types of channels in the nociceptors – specifically, sodium (Na) channels that only open at particular voltages but are blocked by acids. Since these voltage-gated Na channels normally contribute to nociceptors becoming active, their blockage makes the nociceptor less likely to become active. Imagine voltage-gated Na channel blockade and acid sensor activation on opposite ends of a see-saw, teetering to determine whether a nociceptor is active (Figure 1); in mice and humans, the acid sensor activation outweighs the Na channel blockade, resulting in active nociceptors and the sensation of pain. In naked mole rats, however, a minor change in the building blocks that make up one of the naked mole rat’s voltage-gated Na channels increases their tendency to be blocked, ultimately tipping the see-saw so that the nociceptors aren’t activated and the animal doesn’t feel pain [6]. Interestingly, humans with mutations in the gene that encodes this voltage-gated Na channel are also completely insensitive to pain [8].

Just a few months ago, researchers also discovered how naked mole rats are insensitive to pain related to heat and inflammation. When a portion of your skin is injured or inflamed, that spot becomes increasingly sensitive so that any small little touch becomes painful. This phenomenon is called hyperalgesia, and it is made possible by something called nerve growth factor (NGF). Remarkably, naked mole rats don’t experience hyperalgesia at all, even though NGF binds to its appropriate receptor, called TrkA. In most animals, when NGF binds to TrkA, it initiates a chain of events that ultimately sensitizes a particular type of ion channel (one of the same acid-sensing ones that was discussed above), resulting in hyperalgesia and the sensation of pain. In naked mole rats, however, a tiny change in the TrkA receptor causes it to be less effective in sensitizing the ion channel when it binds NGF, and voila, the naked mole rat is pain-free even in the presence of high heat [8]! Deficient TrkA may also result in perturbed development of C fibers – one of the primary types of nerves that convey pain information -, leaving naked mole rats without much of the necessary wiring for pain perception [8].

It may be difficult to understand why naked mole rats have these molecular idiosyncrasies while other animals (even other African mole rat species) lack many of these seemingly advantageous tweaks to their biological code. However, researchers believe that these tweaks may have arisen through evolution only in naked mole rats because of their unique environment and other less-advantageous characteristics. For instance, in their high-CO2/low O2 underground tunnels, it is likely that reduced acid sensitivity was evolutionarily adaptive since high-CO2 can result in acid buildup in body tissue [6]. Moreover, the researchers who discovered TrkA hypofunctionality speculate that heat sensitivity is less necessary for naked mole rats than for other animals because of the predictably and consistently warm temperatures in their underground habitat in East Africa. And since they are particularly “energetically challenged” rodents, it may have been evolutionarily advantageous for them to forgo pain sensitivity in favor of conserving energy [8]. In other animals (like us), pain sensitivity may seem like a pain (pun intended) but is absolutely crucial for our survival in highly unpredictable environments with ever-changing temperatures and other conditions. Nonetheless, characteristics like cancer immunity and pain insensitivity have undeniable appeal, and there is likely to be considerable future research to determine whether these small molecular tweaks might be transferable to humans through novel drugs or gene therapies.
The naked mole rat is an incredible example of both successes and failures of evolution and the wonder (or bizarreness) of nature. However, it might also have a lot to teach us about longevity, cancer resistance, pain tolerance, and more that are of paramount interest to our own species. The naked mole rat isn’t easy on the eyes, but if you can get past its resemblance to male genitalia, you might grow to love it. 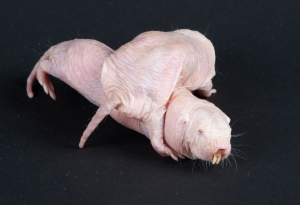 ← Get your brain fit The Language of Arrival →