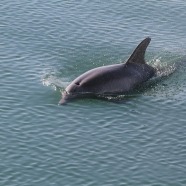 Sleep, though one of my greatest joys in life, is frustratingly unproductive. As much as I love to curl up in bed, close my eyes and flip the off-switch on my consciousness, the realization that I spend 24-33% of my day just staring at the backs of my eyelids is exasperating. Imagine the possibilities if I could instead spend that time reading books, or exercising, or writing a paper for class, or any number of other things! While sleep is certainly important for rejuvenating our bodies and solidifying newly formed memories [1], couldn’t it be possible to do those things while still being able to read, or move, or write? I do have two hemispheres of my brain, after all…do they really BOTH need to be asleep?

While the answer for me and all other humans is “yes”, the same is not true for all members of the animal kingdom. Animals such as dolphins and birds demonstrate a phenomenon known as unihemispheric slow wave sleep, which means that one half of their brain can be asleep while the other is awake! But in order to appreciate how these animals’ sleep differs from our own, let’s first get up to speed on what a typical, human brain looks like when it’s asleep.

Sleeping may feel like a transition from an “on” state to an “off” state, but this is far from the case. Have you ever started a time-consuming process on your computer – say uploading photos or running some lengthy code – and then let it sit for long enough that a screensaver appeared? This is like your brain when you’re asleep; while your body looks like it’s been shut down, your brain is still working really hard in the background – its activity just shifts into a different “mode”. 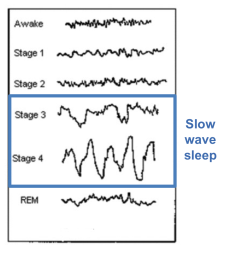 In fact, there are multiple different activity “modes” that your brain shifts into over the course of a regular night’s sleep. These modes can be distinguished by the characteristic shapes of the waves in electrical brain activity (Figure 1). For instance, look at the difference between “Awake” activity and Stage 3 and 4 activity; while brain activity during wakefulness exhibits frequent but small fluctuations, activity during stages 3 and 4 is appropriately called slow wave sleep for the slow (about 1-2 per second) but large changes in voltage that occur. These big waves are the classic neural signature of deep sleep (but to learn about REM sleep as well as why sleep is important, check out a previous NeuWrite article).

Perhaps the best known examples of animals that can sleep with half of their brains are cetaceans – aquatic mammals like dolphins and whales. Electrical brain activity measured by EEG from each hemisphere of a sleeping dolphin shows an obvious difference (Figure 2); while one hemisphere exhibits the big, slow changes in electrical activity characteristic of slow wave sleep (like in Fig 1), activity in the other hemisphere is indistinguishable from activity during full wakefulness. This unihemispheric sleep state enables dolphins to keep one eye open, to come up to the surface for air and to “just keep swimming” – even while they’re asleep! [2] 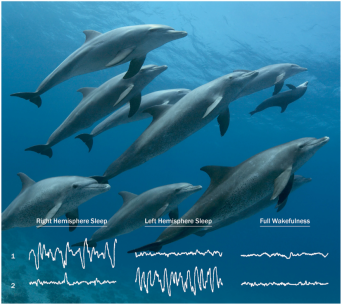 Unihemispheric sleep in cetaceans is thought to serve multiple other functions as well. For instance, having one eye open may help the dolphin or whale perform sentinel functions – in other words, literally keeping an eye out for danger. When researchers presented a visual stimulus so that it was processed by the dolphin’s “asleep” hemisphere, the dolphin did not respond at all. But if the stimulus was shown to the other eye so that it was processed by the “awake” hemisphere, the dolphin immediately reacted with a startle response or sudden, fast swimming [3]. Meanwhile, it has also been observed that a sleeping dolphin’s open eye is almost always pointed towards its schoolmates or, if it’s a newborn calf, towards its mother [4], suggesting that unihemispheric sleep may also be advantageous by helping sleeping cetaceans stick with their groups.

Get your ducks in a row! 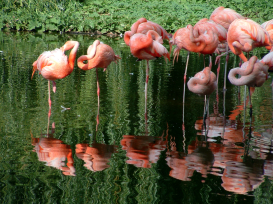 How do those sleeping flamingos not fall down in their sleep?!

Have you ever been to the zoo and noticed a sleeping flamingo standing on one leg and maintaining perfect posture? This is because birds, like cetaceans, also possess the ability to sleep with half of their brains. In the flamingo’s case, this is thought to allow them to keep standing on the leg that is controlled by the awake side of the brain, while having even just one brain hemisphere go to sleep allows them to lower their metabolism and reap sleep’s other benefits [5].

Unihemispheric slow wave sleep in birds is believed to help the animals be alert to potential predators. In a study of mallard ducks sleeping in a row, the ducks in the middle of the row had one eye open only about 12% of the time asleep, while ducks on the ends were more than twice as likely to have one eye open, and the open eye was almost always pointed away from the group. Meanwhile, EEG recordings of the ducks’ electrical brain activity confirmed that the ducks on the ends of the row demonstrated the neural signatures of slow wave sleep more strongly in the hemisphere corresponding to the eye that pointed away from the other ducks (Figure 3). Overall, the ducks that were flanked by other ducks spent significantly more time fully (bihemispherically) asleep, while the “sentinel” ducks on the ends of the row spent more time in unihemispheric slow wave sleep so that their eyes on the exposed ends were alert to possible predators. In fact, these sentinel ducks in unihemispheric sleep responded in a fraction of a second to simulated predatory attacks [6]. Put more simply, a row of sleeping ducks collectively takes on the neural characteristics of a single, alert duck!

Figure 3 – unihemispheric slow wave sleep in a row of sleeping ducks. While the sleeping duck in the middle of the row demonstrates the neural signatures of sleep in both hemispheres, the duck on the left (viewer’s right) keeps its left eye open because its right hemisphere (which processes visual information from the left eye) is awake while its left hemisphere exhibits slow wave sleep. The opposite is true of the duck on the right. The depicted neural data is not real data but purely schematic.

Why can’t my brain do that?!

Although the neural basis of unihemispheric slow wave sleep is still largely unknown, neuroscientists have been able to rule out some of the usual suspects. For instance, the corpus callosum – the bundle of fibers that links the brain’s two hemispheres and allows neural signals to flow between them – is a logical candidate for making sleep in humans and most other mammals exclusively bihemispheric. However, split-brain patients and people born without a corpus callosum still experience bihemispheric sleep; the electrical signals in each hemisphere are less correlated with each other, but they still both exhibit the neural signatures of slow wave sleep [7]. Thus, while the corpus callosum plays a role in synchronizing the two hemispheres during sleep, it is not solely responsible for ensuring that they are both in the same “mode” of sleep or wakefulness at the same time.

So let’s turn to an alternative suspect: the brainstem. The brainstem is an evolutionarily ancient brain structure connecting the brain to the spinal cord, and it re 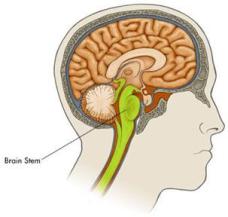 gulates many unconscious functions that are necessary for our survival, such as breathing, regulating heart rate, and – you guessed it – sleep. The brainstem has emerged as a top contender for controlling whether sleep is uni- or bi-hemispheric because cats – normally bihemispheric sleepers, like us – have been shown to exhibit unihemispheric slow wave sleep after their brainstem was cut down the middle, even when their corpus callosum was completely intact! [8] Still, exactly how the brainstem regulates sleep and how this differs between animals that experience bihemispheric or unihemispheric sleep is a fascinating question that has yet to be answered.

While neuroscientists ponder the neural mechanisms underlying these different forms of sleep, it is also fascinating to consider why, and how, we may have evolved without the ability to sleep with only one half of our brain. Some researchers have speculated that unihemispheric sleep may have been selected against over the course of mammalian evolution because it is a less efficient means of sleep. Since most mammals’ sleeping habitats do not necessitate maintained alertness, the costs outweighed the benefits. In cetaceans, on the other hand, the benefits of unihemispheric sleep may have outweighed the costs because of these animals’ need to come up for air and continuously swim in their underwater environments [7].

However, what if this unique ability wasn’t completely lost in humans after all? A very recent study reported that on the first night that people spent in a new place, their right hemispheres demonstrated more slow wave activity in a particular brain network than their left hemispheres. Moreover, only their left hemispheres showed a neural response to a surprising auditory stimulus, suggesting that their left hemisphere was more alert or “awake” than their right! [9] This could explain why many people report having disrupted sleep on their first night of vacation, but more relevant to this article, it raises the intriguing possibility that the human brain is at least partially capable of decoupling its two hemispheres during sleep when it is in an unfamiliar and potentially dangerous or unpredictable environment. Nevertheless, the degree of decoupling found in humans is nowhere near that of cetaceans or birds during unihemispheric sleep.

As much as I often think that my time could be better spent if my brain, or even just half of my brain, didn’t spend so much time asleep, I have to believe that there’s probably a good reason for it. Still, I can’t help but wonder, what would it feel like for one half of the brain to be asleep while the other is awake? Would it feel like a fitful night’s sleep, or something completely different and unimaginable? If we ever figure out a way to communicate with dolphins, that’s the first thing I’ll ask. 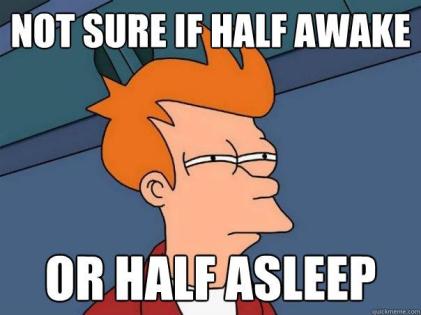