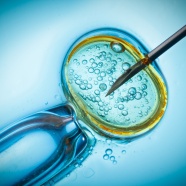 CRISPR and the Real World

“We hold these truths to be self-evident, that all men are created equal…” So begins our country’s Declaration of Independence. While we have learned that this preamble is all too simple in the context of wider society, consider the most basic interpretation of this sentiment; at the precise moment of a child’s birth, broader circumstances notwithstanding, that child is starting from the same place as the rest of all humanity. She is entirely unfamiliar to her community. She could live to be 100 years old, or be especially prone to illness. Perhaps she has a mind that will move at lightning pace, endowing her with a genius-level IQ but also a tendency towards mania. Her potential for anything and everything is unknown to the rest of us. Her genes, however, have already laid the foundation for her story to begin.

Reproduction in its purest form is like a roll of the genetic dice – you just don’t know what combination of mom and dad’s DNA you’re going to get. Do I have the genes that predisposed my grandmother to cancer, or the ones that contributed to my grandfather’s Alzheimer’s Disease? Maybe I just have the genes that make me unnecessarily anxious about everything. Perhaps you didn’t get those genes, so you don’t worry about these things too much from day to day, but there’s a good chance that your parents worried about it a lot while they were waiting for you to arrive. Soon-to-be parents often have a flurry of anxiety surrounding the future of their children, not least of which are the concerns about what their own DNA could pass along for better or worse.

In the previous installment of this series on CRISPR, the gene-editing tool that has taken biology by storm, we discussed how concerns like these have made procedures like prenatal screening a common part of modern parenthood. We also looked at what extending this practice from screening to editing one’s offspring could mean for our children (tl;dr it would mean you could edit the genes that get passed along to future generations). We know that editing the germline is an incredibly powerful concept with tremendous implications for human biology and evolution, but what does it mean for human society?

Fast forward into the (not so distant) future. CRISPR is a widespread commercial technology and has started to be integrated into routine prenatal examinations when major genetic red flags come up. There is a price, of course. After all, the tools needed to identify these red flags have been available for some time, and the technology to terminate such a pregnancy is even older than that. This likely means that traditional prenatal screening and abortion will be the more affordable option for families that need to deal with one of these red flags and cannot afford CRISPR. For families that can afford it, they have the option to eliminate that red flag not just in the moment, but for all future generations. 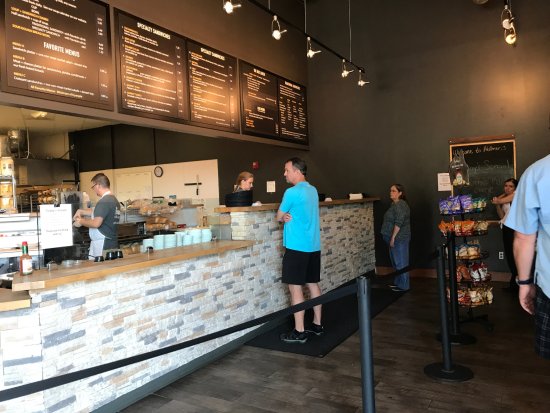 A man in future Dystopialand orders a handsome son with a great pitching arm and a side of perfect SAT scores.

Let’s pause right here. It’s easy to get carried away and imagine a world where the wealthy are genetically enhanced across generations while the socioeconomically burdened dwindle in number, progressively becoming sicker and weaker than their wealthier counterparts. These hypothetical mental exercises might be fun (or terrifying), but they don’t do much to elucidate what the future of a CRISPR-enabled society may look like because they are just that: hypothetical. There are, however, things that we already do know about the free market as it relates to biology that can inform our predictions for the future. And if we are to assume that CRISPR is going to come at a price, which seems like a safe bet, the current behavior of people within the free market should mold our visions of this future.

Here is one thing that we know for sure: humans place a premium on certain biological traits. Like we previously mentioned, genetic screening has kept the number of children born with Down’s Syndrome at a steady level despite an increase in prenatal diagnoses because well more than half of these pregnancies are terminated. We also already know that this premium extends to more superficial traits. The amount of money that pours into the cosmetic surgery industry alone signals that, given the resources and opportunity, many of us would opt to look more like a supermodel and less like a hobbit. We don’t just want those good looks and traits for ourselves, either; people will pay more for an egg from a donor who is especially beautiful and accomplished than your average working-class woman.

People are not exactly jumping at the chance to modify every bit of their genome. Studies on public opinion of gene editing have shown that while there is general support for the use of gene editing in a therapeutic context, people are somewhat more wary of the use of this technology for enhancement purposes. Still, one does not have to consider only hypothetical dystopian scenarios to see the potential for commercial gene editing to have a profound socioeconomic impact. The evidence is right in front of us: when there is an opportunity to buy a biological advantage, as vital or as superficial as it may be, people are willing to pay for it. If it was commercially available, what evidence do we have that CRISPR wouldn’t follow the same path? 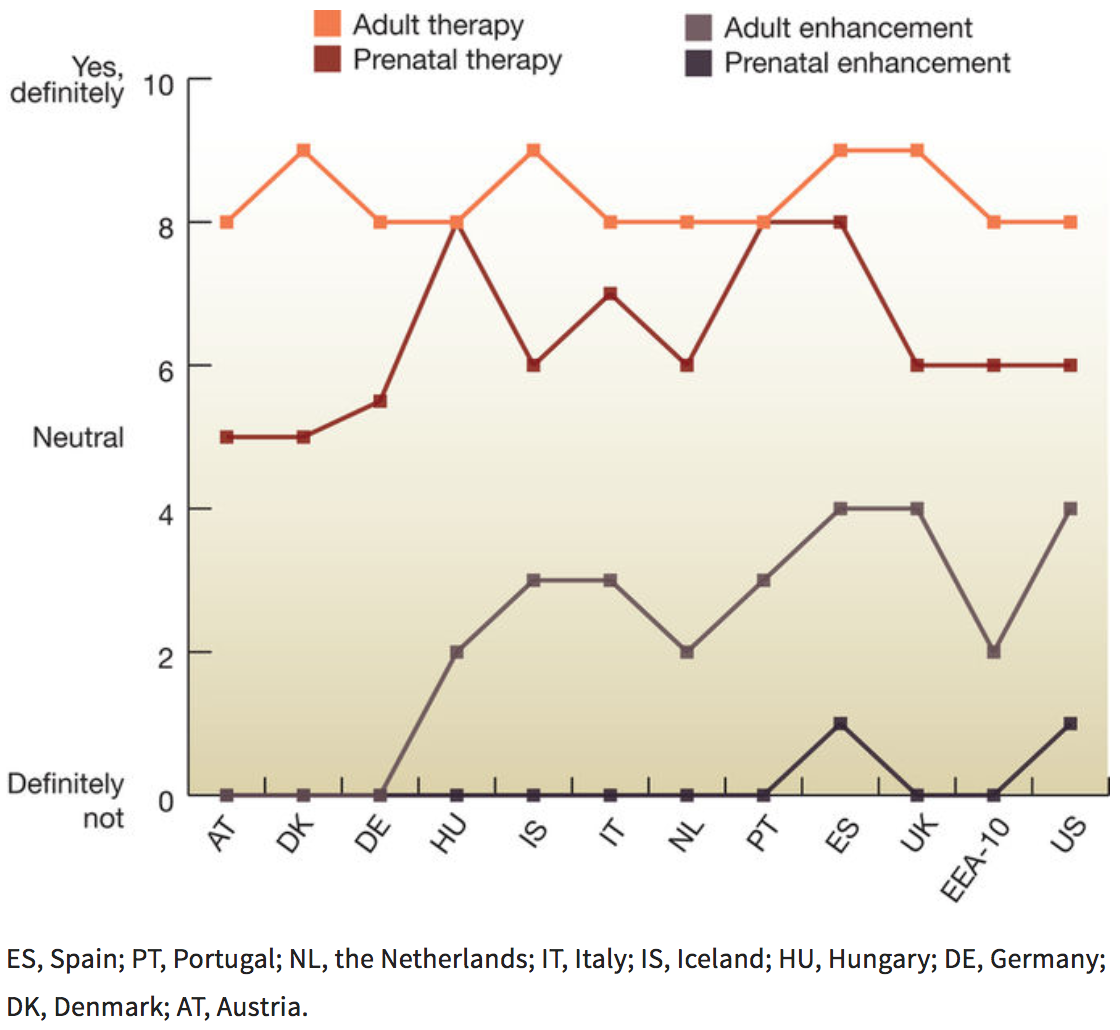 Variation in public opinion on whether or not gene editing is acceptable in different scenarios.

Is this even legal?

The introduction of a popular new method is often a watershed moment in the scientific community. Once a new tool is available, scientists move quickly to find the best applications for their own research. The first published use of CRISPR was in 2012. Just three years later, scientists in China published the first paper in which CRISPR was used in live human embryos. Although there are laws that prohibit gene editing in viable embryos (none of the embryos in the aforementioned publication could have been brought to term, for example), the legal landscape surrounding a move from laboratory to clinic is ambiguous. It’s a scenario we’ve seen before: technology moves rapidly, and the law is slow to follow.

There are laws on the books in many countries pertaining to the manipulation of human embryos. You may remember the debate over stem cell research that dominated American headlines for years. For some that debate has not been settled, although stem cell research has largely been considered acceptable practice at this point. Debates like that one laid the foundation for countries to make real legislation regarding what can and cannot be done with human embryos. Still, the science moves too quickly for many of these laws to cover the full spectrum of technological capability that we will soon have with gene editing.

The form that legislation on gene editing can take varies considerably. Some countries have outright bans on the editing of human embryos outside the laboratory written into law. In other countries, these bans take the form of “guidelines,” and I’ll be honest – I’m not even sure what that truly means. One developmental biologist in China was even quoted once as saying that “we have guidelines but some people never follow them.” “Rules are meant to be broken” may be a sweet mantra for a pirate, but it gives me a chill to think that the same life philosophy would make its way to a fertility clinic someday. 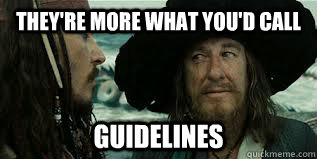 Not gonna cut it, Barbossa.

Generally speaking, current laws that do allow editing of the human genome do so under the condition that it won’t result in a live birth. However, the lack of any explicit regulation on moving this technology into a fertility clinic, as is the case in the United States, is concerning. The following infographic from the journal Nature paints a picture of this messy legal landscape, and highlights the need for further scrutiny and perhaps even international laws on the matter. 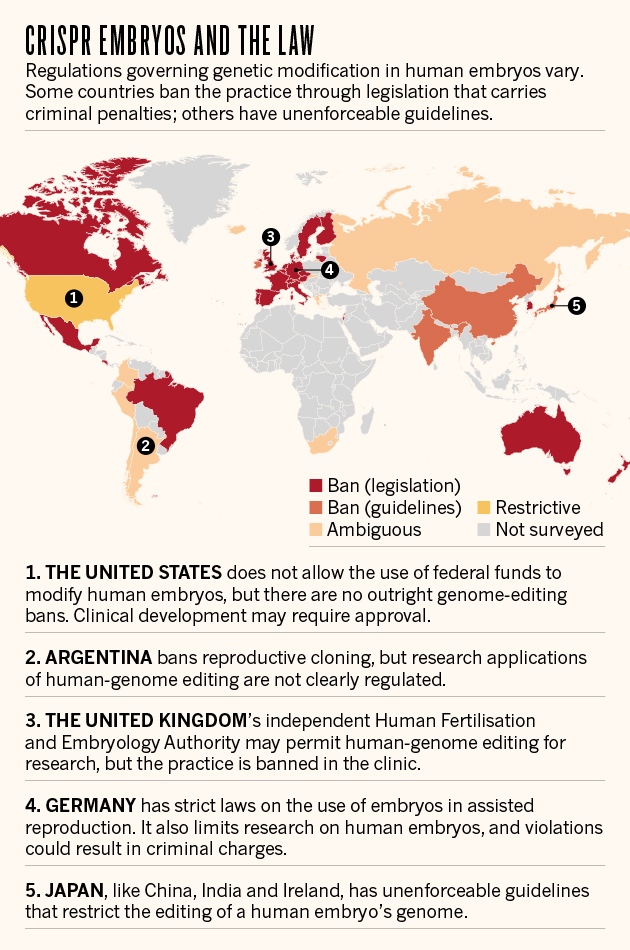 A look at the complicated legal landscape on gene editing, from Nature.

What do scientists think?

Although the debate on editing the human germline needs more airtime in the legal world, the scientific community has been grappling with the very real future of gene editing for some time now. While every scientist has their own set of priorities when evaluating this technology, there is a great deal of agreement when it comes to some aspects of gene editing. Combing through recorded opinions of leaders in the field of biology and biotechnology reveals that many scientists believe that editing the human germline is an inevitable reality. Another common theme is that gene editing is risky. It may not yet be safe enough to edit a viable human embryo, but we are on pace to do so at some point in the future. These scientists are wary of this first wave of trials for a number of reasons, including the rather high risk of off-target effects of the editing technology.

Practicalities aside, the scientific community wrestles with the same ethical questions that we have brought up throughout this CRISPR series: where do we draw the line for what is and is not acceptable to edit? What if only the richest among us can afford to edit our genomes? There is general support among researchers for a temporary international moratorium on germline editing research until we can adequately answer these questions as a society and fully appreciate the risks – and possible rewards – of adopting this revolutionary technology.

← Science and S’mores: SciCommCamp 2017 Ancient Aliens Among Us →