Home » Animals » Ancient Aliens Among Us

Ancient Aliens Among Us

The prospect of intelligent extraterrestrial life has tantalized us Earthbound humans throughout our history. In relatively recent times, artists such as H.G. Wells, Ursula Le Guin, and Gene Roddenberry have created wide-eyed fantasies full of violent invasions, fraught coexistence, and delicate peace between humanity and the Other. As early as the second century A.D., the satirist Lucian of Samosata wrote of civilizations on the sun and the moon. Modern society even has protocols in place for what to do if intelligent aliens should be detected. A recent depiction of that process comes from the 2016 film Arrival, in which humans attempt to decipher the alien language of the visiting “Heptapods,” but are stymied at every turn by the defense-obsessed militaries of the world.

If we ever do encounter alien life for real, learning about them —especially understanding their minds — is likely to be markedly more difficult than in fiction, hawkish militaries or no. In theorizing about what intelligent life is like elsewhere in the universe, all we can do is extrapolate from terrestrial life. Since predictions based on a single data point are unlikely to be correct, other minds could be different from us in ways beyond imagining. So what would it say about life and minds in general if we do find similarities?

Though we are charmed by the prospect of seeking out new life from strange new worlds, our fascination with other minds goes deeper — to a different sort of non-terrestrial life. According to legend, in the depths of Earth’s own oceans lurk mysterious creatures like the Kraken, an enormous, multi-tentacled ship-killer.  Although reports of its size might have been exaggerated, one common description of the Kraken sounds an awful lot like an octopus or a squid — creatures whose last common ancestor with humans and other apes may have lived between 500 million and a billion years ago [9]. Among our closer relatives are sea cucumbers, many species of worms, dinosaurs, and everything else with a spine (all birds, fish, reptiles, amphibians, mammals). Basically, cephalopods (octopuses, squid, cuttlefish, and nautiluses) are about as alien to humans as it’s possible to get. And yet they are surprisingly similar to us in some respects. 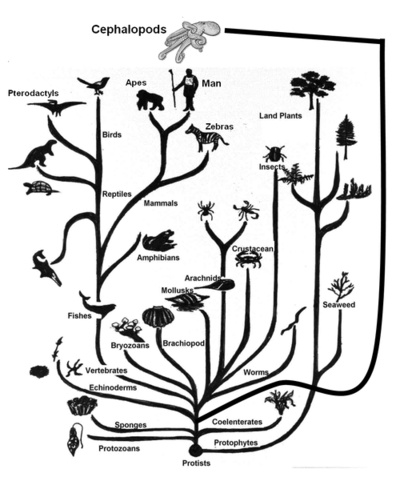 What then are we to make of the similarities between cephalopod intelligence and human intelligence — similarities like tool use and advanced learning abilities that may have emerged less because of our common biology and more because they are good solutions to common problems faced by life on our planet?

It’s actually not that uncommon for nature to stumble upon similar solutions more than once. Convergent evolution is the name scientists have given to that phenomenon. Consider the eye. Although the last common ancestor of vertebrates, jellyfish, and cephalopods could only detect the most basic light patterns, each has independently evolved eyes very much like our own [5]. This similarity exists despite major differences in the cephalopod and vertebrate nervous systems. Indeed, whereas vertebrates process visual input in their brains — the central hub of the nervous system — cephalopods have dedicated optic lobes for that purposes [3,10]. Maybe more impressive is the degree to which the nervous systems in cephalopods are distributed: a full two-thirds of octopus neurons are located in the arms, resulting in a remarkable capacity for autonomous movement and coordination [3].

Given their different neuroanatomy, you might expect cephalopods and humans to process and store information very differently. To a degree, they do, but there are notable commonalities. The octopus, like humans, may have separate systems for long- and short- term memory, as well as a method for stabilizing long-term memories over time. So argues a recent study by Shomrat and colleagues, who showed that stimulating a neural process critical to learning (long-term potentiation) improves short-term memory, but impairs long-term retention, whereas blocking that same process impairs both short- and long-term memory [7].

There are other similarities in the way humans and cephalopods learn as well. A core characteristic of human memory is our ability to mentally “time travel” [8]. This allows us to remember the three Ws of past events: what happened, where it happened, and when it happened. How did you spend your Thanksgiving this year?  Your ability to recall that experience (or episode)  is conveniently termed episodic memory, and it’s conspicuously hard to detect in non-human animals. After all, an animal can’t tell the scientist if it’s mentally transporting itself into the past. But with carefully designed studies, we can search for this phenomenon in some other species.

Scrub jays are a species of bird known for storing their food to eat later. But do they remember what they hid where and when? Like many birds, scrub jays like to eat worms, but when worms aren’t available, they’ll go for other foods, like nuts. In a now-classic study, researchers Nicola Clayton and Anthony Dickinson taught jays to realize that worms decay and become inedible after a few days, whereas nuts last longer [2]. Next, they allowed the jays to stash either a worm or a nut on one side of a dirt-filled tray, then five days later allowed them to store the other food on the opposite side of the same tray. Four hours after the second stashing the birds got to choose which side of the tray to dig in to find their food.

When the jays hid the nut first, and the worm second, they always dug up the worm when it came time for their snack. But when they hid the worm first and the nut second, they knew enough time had passed that the worm would have decayed, and so they preferred the nut. Even more impressively, follow-up research showed that the same species can still perform this task, even when they don’t learn about worm decay until after they have hidden the worm and nut. The birds not only remembered what food they had hidden where, and when they did so, but were  able to update those memories with new information as well.

Other researchers have used modified versions of the ingenious scrub jay experiment to find evidence for episodic-like memory in chimpanzees, orangutans, and bonobos [6], and a few other species. It is perhaps not so surprising to find memory capabilities similar to our own in our close relatives like apes, nor even in slightly more distant ones like rats [1]. To find those abilities in cephalopods, though, would be striking. To test that possibility, Christelle Jozet-Alves, Marion Vertin, and (the same) Nicola Clayton adapted the scrub jay study to the life aquatic [4]. They taught cuttlefish (not actually fish but a close relative of squid) that shrimp (super tasty!) and crab (kinda tasty) are replenished at different rates in different locations, and showed that the cephalopods can remember what food they last ate where, and when they ate it. The cuttlefish then use that information to modify their search for food. In light of the vast swaths of evolutionary time between cephalopods and humans, it appears that episodic-like memory has evolved at least twice on Earth.

Astronomer Frank Drake proposed an equation in 1961 to guide our expectations about how many extraterrestrial civilizations might exist in our galaxy. It takes into account things like the rate of star formation, the proportion of planets that support life, and crucially, the probability that intelligent life develops. Of course, all of these quantities are estimates at best, and irresponsibly wild guesses at worst. But on the margin, should it sway our predictions about intelligent life in the universe that certain key components of intelligence seem to have evolved separately? Although we still only have a single data point for the origin of life, the convergent evolution of systems like memory gives us a few more for understanding intelligent life. It’s possible that, in the immortal words of Jeff Goldblum, “life, uh, finds a way.”