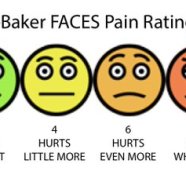 I Feel Your Pain – The Social Transmission of Pain in Mice

We all know that emotions are contagious.  Your trip to the DMV might see you infected with that peculiar emotion – something halfway between apathy and misanthropy – that is endemic to the DMV.  On the other hand, your ray-of-sunshine coworker just may brighten up your day (unless you happen to work at the DMV).  But what about something simpler, like pain? Can pain be transmitted socially?

Researchers led by Professor Andrey Ryabinin at the Oregon Health and Sciences University recently set out to answer that question using mice [1].  One component of pain is the phenomenon known as hyperalgesia, a word with Greek roots that literally translate to over (hyper) sensitivity to pain (algesia).  One common cause of hyperalgesia is drug withdrawal.  For instance, during opiate or alcohol withdrawal you might perceive a slight bump as equivalent to stepping on a Lego (a.k.a, the greatest pain known to humankind).  Mice also experience hyperalgesia during drug withdrawal, and this study utilized withdrawal-induced hyperalgesia to study the social transmission of pain.

At this point, you might be asking yourself: “Self, how do you measure pain in rodents?” One of the greatest challenges in non-human research is finding appropriate methods to study stuff that is trivial to assess in humans.  The gold-standard of human pain research is the verbal self-report, but mice certainly can’t tell us how they are feeling or even point to one of those weird smiley-face-pain-scales some doctors have in their office (Fig. 2).  In fact, prey animals like mice generally try to hide how they are feeling to prevent giving clues to predators.

This study used three different, ethical, and mild methods to assess pain in mice.  The first is the “mechanical sensitivity test”.  Basically, scientists poke a mouse’s foot with thin fibers known as Von Frey Hairs with varying amounts of force and see at what threshold they withdraw their foot (Fig. 3).  A lower threshold indicates a greater sensitivity to this mechanical pain.  Another test assesses “thermal sensitivity” via submerging a mouse’s tail in 46°C (~115°F) water and measuring how long it takes them to withdraw the tail.  Finally, in a “chemical sensitivity” test, mice were injected with formalin (formaldehyde; similar to formic acid which is in some ant stings) in one paw and then researchers measured how much time they spent licking the affected paw.

Pressure is gradually increased until the mouse withdraws its paw.

Now you might be still be left wondering how they model drug withdrawal. To model alcohol withdrawal, mice were allowed to choose between two different bottles, one of which has water and the other of which has alcohol.  Over several weeks the concentration of alcohol is slowly increased as the mice escalate their intake.  After this, the researchers remove the alcohol bottles to induce withdrawal, and it is during this withdrawal (one day after the mice last had alcohol) that they will conduct their pain tests.

As expected, withdrawal from alcohol led to dramatic hyperalgesia in all three tests as compared to control mice who only consumed water, replicating the effects of drug-withdrawal in humans.  Now though, we get to the interesting part of the study.  The authors also had an additional group of mice that were co-housed with their alcohol drinking roommates but themselves had no access to alcohol.  Remarkably, these co-housed mice also displayed hyperalgesia on all three tests.  Let me repeat: Despite never having alcohol nor being in withdrawal, these mice were just as overly sensitive to pain as their co-housed buddies.  This is the social transmission of pain.

The first question you might have is: how?  How did this transmission of pain sensitivity occur?  One plausible method is stress.  Stress is also known to induce hyperalgesia[2].  Mice co-housed with other mice undergoing withdrawal might be more stressed (imagine living with an alcoholic) and therefore, more sensitive to pain.  However, behavioral tests found no differences in anxiety in any of the three groups (controls, alcohol-withdrawal, or co-housed mice), and furthermore, a hormone associated with stress in rodents (corticosterone, analogous to cortisol in humans) was present in similar levels across all three groups, both at baseline and in response to an acute stressor.  Finally, to really cross their t’s, the researchers also gave mice the anti-anxiety drug diazepam (Valium) and found that it had no effect on the hyperalgesia, further highlighting that stress and anxiety couldn’t explain their results.

Another plausible method of transmission is via some chemical signal or pheromone that induces hyperalgesia in nearby mice.  To assess this possibility, the researchers replicated their experiment, but included an additional group of mice.  Like the control mice, this group had no access to alcohol and was housed separately from the alcohol drinking mice.  Unlike the controls however, this group periodically received small amounts of bedding from the cages of the alcohol drinkers during their withdrawal.  These mice, who were merely exposed to the bedding of alcohol drinkers, were also hyperalgesic!  The researchers concluded that some chemical compound is being exuded by the alcohol drinking mice during their withdrawal, and it is this chemical that is responsible for the social transmission of pain.

This study raises some extremely important technical concerns in animal research. Control groups in studies often involve cage-mates.  For instance, in a stress study I might subject one mouse to an acute stressor (like a loud noise), but leave his cage-mate alone as a control.  If stress (like pain) could also be transmitted socially, my supposed control might actually be just as stressed as the experimental mouse, and when I compare the two on a test they would look identical to one another, leading me to conclude that my acute stressor was ineffective.  Future studies are needed to see if other physiological states can be transmitted this way, but regardless, this study demonstrates the importance of carefully designing experiments in the future.

More broadly though, this demonstration that mice can transmit pain socially via chemical signals is remarkable.  While scientists have known that humans (and rodents) can transmit pain via complex social interactions [3], such a low-level transfer of a physiological state is exceptional.  There are a ton of interesting avenues of research that this study opens up, from identifying the particular chemical(s) responsible, to seeing if other physiological states can also transfer, to seeing whether other animals can also transmit pain in the same way.  It is interesting to wonder why the social transmission of pain might exist in the first place.  Evolutionarily, it seems to make a great deal of sense.  In social creatures like rodents, it benefits both the individual in pain and their companions.  For the individual, it might allow them to receive help, while the non-affected companions might be more sensitive to any potential danger.  Perhaps the most directly interesting question is: can you yourself smell someone’s pain?  Humans and mice are (shockingly) quite different, and many future studies are needed to answer this question one way or the other.  Still, in the meantime feel free to try for yourself.  The next time a friend is in pain rather than commiserating and telling them you “feel their pain” instead, lean in, and give them a good sniff.

← A Tribute to Ben Barres Instant Gratification: Weighing the Psychological Benefits and Costs of MDMA Use →