Posted by UCSDNeuro on May 17, 2018 in Uncategorized | Leave a comment

I want to take you back to the most embarrassing moment of your life. Come on, you know what that was. For some people it was giving a presentation in front of a large audience. For some it involved saying or doing something really stupid, perhaps in front of someone you were attracted to; it doesn’t matter. Just take a moment to picture YOUR moment. How did you feel? Did your palms get all sweaty? Did you want to throw up? Was your face burning red?

Think about how crazy that is for a moment! Your face burning red. When humans feel embarrassed, shameful, or like they are at the center of attention, no matter the color pigment of their skin, their face can literally change color! They advertise to the rest of the world that they are experiencing these dreadful emotions, when they want nothing more than not to be noticed. And the worst part is, there isn’t a thing you can do to make that visible burn on your cheeks go away. In fact, the more you think about the fact that you are blushing, the more you blush!

So How Do We blush?
First off, let’s talk about what it means to “blush”. The actual darkening of the face is caused by vasodilation (opening of blood vessels), and, therefore, increased blood flow at the surface of the skin. Increased blood flow at the skin surface also causes an increase in surface temperature and that burning sensation you feel when blushing. There is even a defined “blush area” on the cheeks where the facial skin has more capillary loops per unit area than other body regions. Capillary loops are just small blood vessels at the surface of the skin. Not only that, but the blood vessels in this “blush area” are also wider in diameter and closer to the skin surface. [1] The human face was designed to allow blushing to occur. 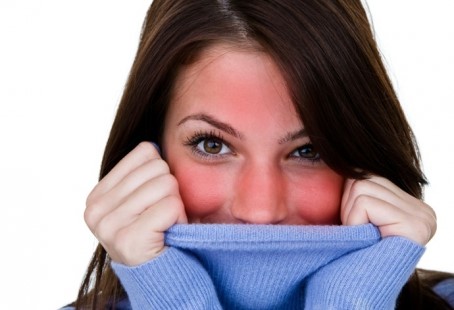 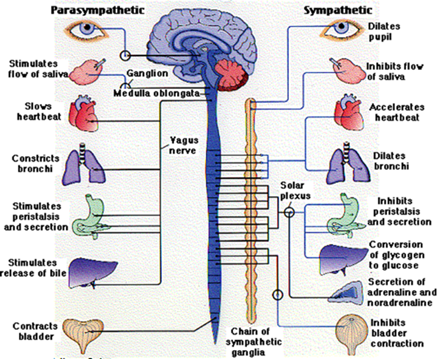 A Puzzle Even for the King of Evolution
In his work, The Expression of the Emotions in Man and Animals, Charles Darwin said, “Blushing is the most peculiar and most human of all expressions.” It is hard to make sense of such a peculiar unconscious behavior. People are still arguing over whether blushing evolved to serve humans in some way or if it is just a byproduct of other evolutionary phenomenon. Remember, the response to social anxiety that causes blushing is caused by the same system (the sympathetic nervous system) that causes the body’s response to other stressors. It makes sense when you are being chased by a bear for your heart rate to increase as well as for vasodilation to occur in certain parts of your body so you can better respond to the situation by running away. This response makes far less sense when you are performing in front of an audience or talking to your crush on the other hand.
Was it an Accident?
The main argument in favor of social blushing being an evolutionarily unintentional occurrence is that not enough time has passed under the right conditions for blushing to serve any advantage. Evidence suggests shortly after losing fur, early man had very dark skin. This was due to their high levels of melanin, the pigment found in skin, after they lost their fur. While people with dark skin can still blush, it is more difficult to see. It is estimated that humans ventured out of Africa only about 60,000 years ago to regions of the earth with less frequent and direct sunlight. Only when this occurred did certain populations of Homo sapiens begin developing lighter skin. This is due to our need to produce Vitamin D3, which you can read about here.[2] While 60,000 years may seem like a long time, it is a mere blink of an eye in the evolutionary sense, at least for a species with such long generation cycle.
Perhaps Not
While it’s true that social blushing couldn’t be selected for in such a short amount of time, many still argue that this isn’t a problem at all. Our hominin ancestors likely started out light-skinned right after we shed our fur some 1.8 million years ago, so it is argued that the evolutionary influence over the phenomenon of social blushing began well over 60,000 years ago, making the time argument far less relevant. Those in favor of blushing being selected for argue that blushing aids in human social interaction and that having a population of blushers benefits the community as a whole. The reason blushing serves the community is precisely the reason we dislike blushing so much, we can’t control it. You can’t fake a blush (without makeup). According to this article in Psychology Today, when a person does blush, it unquestionably demonstrates what they are feeling. As someone observing the blush, you can be more confident trusting that the person who conducted an act of social misconduct sincerely feels remorse and won’t do it again. A study surveyed how likely people would be to forgive somebody who had wronged them in a hypothetical scenario, based solely on looking at a picture of that individual. Contrary to what you might assume, people reported being significantly more likely to forgive someone who was blushing over someone that was not.

Who is at Risk?
In the same work mentioned before, Darwin discusses who is most likely to blush. While there certainly are trends in tendency to blush based on complexion, genetics and shyness, there are also more general societal tendencies. Children and adolescents blush far more frequently that adults. Though kids generally don’t develop the tendency to blush until a few years of age, despite the fact that they are entirely capable of flushing (meaning their face can turn red in response to exertion or heat). Blushing symbolizes innocence and naivety, but it also requires a sense of self awareness, which children usually don’t develop until age 18 to 30 months. Women are also more likely to blush than men. Scientists suspect this evolved as a way for men to discern the virtue of a potential partner, hence the phrase “the blushing bride” referring to the idea that women who blush easily are the “picture of virginal innocence”.

Whether designed by natural selection or not, blushing is a very real phenomenon that affects the majority of the population. Despite the commonality of blushing, people are still surprisingly ashamed of it. In fact some people are so afraid of blushing (a condition known as ereuthrophobia) that they opt to undergo extensive cognitive behavioral therapy, hypnotherapy, or even surgery to prevent themselves from being able to blush! This surgery, called a bilateral endoscopic thoracic sympathectomy (ETS), entails going in through the armpits and cutting the nerves that cause the facial blood vessels to dilate. This procedure is only performed in extreme cases, but it exemplifies how we generally view blushing as being such a terrible thing. This shouldn’t be the case at all. Blushers are viewed as being more trustworthy and virtuous, so those of us that have the propensity to blush shouldn’t be ashamed, we should be proud!