Posted by megkirch on May 24, 2018 in consciousness, Memory, Neuroscience, Uncategorized | Leave a comment

It’s one of the most bizarre sensations in the world: feeling like you’ve entered some sort of time loop and are re-experiencing something that’s already happened before. The rational part of you knows that this is a new experience, and yet, you can’t shake the feeling that you’re somehow reliving a brief moment of your past. 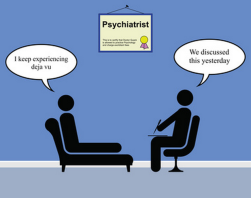 If you are one of the approximately 60% (though estimates vary) of people who have ever experienced déjà vu, you know what I’m talking about [1]. And if you’re like me, you’ve experienced it more times than you can possibly count. I experience it on a spectrum; there are moments, often in conversation with someone when I’m hit with a vague feeling of familiarity, and there are others when I’m stopped in my tracks by the overwhelming sensation that this exact experience has already occurred. Frankly, I love these moments. They are indescribably bizarre, yet harmless, and leave me filled with awe and a lot of questions.

A window into the brain: Déjà vu and epilepsy

I’ve always wondered how one could possibly study the déjà vu phenomenon. It can’t be investigated in a controlled laboratory environment since it’s an entirely involuntary sensation, and it’s not something that we can study and manipulate in an animal model (if mice and other laboratory animals also experience déjà vu-like phenomena, how would we even know?!). Most studies of déjà vu in healthy individuals rely on retrospective reports, i.e. remembering and recalling specific instances of déjà vu. However, this approach is inherently subjective, fraught with biases, and has little use for understanding its neurobiological underpinnings. 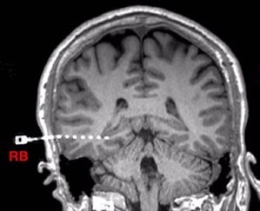 As is often the case when it comes to studying the neural mechanisms of uniquely human phenomena, neuroscientists owe a tremendous debt of gratitude to epilepsy patients. While most humans would not willingly allow a neuroscientist to open up their skull and plop an electrode into their brains, epilepsy patients who are preparing for neurosurgery to ameliorate their symptoms already have open skulls and electrodes in [parts of] their brain. The primary purpose of these electrodes is for the neurosurgeons to locate the epicenter of the patient’s seizures, but they can also serve a dual purpose for neuroscientists who have the rare opportunity to record and/or stimulate human brain activity in willing subjects.

Of course, having access to brain activity from human subjects does no good for the neuroscientist studying déjà vu if the subjects aren’t experiencing déjà vu. But as it would happen, some patients with medial temporal lobe epilepsy experience auras at seizure onset that are accompanied by the feeling of déjà vu. In fact, many researchers have even been able to elicit feelings of déjà vu by stimulating different parts of the patients’ brains (e.g., [2]). This has allowed neuroscientists to examine which brain areas exhibit changes in neural activity during déjà vu episodes, and also to determine which brain regions are important in – and maybe even responsible for – the déjà vu phenomena.

From these studies, three key players have emerged: the hippocampus, the rhinal cortices (including perirhinal and lateral entorhinal cortex), and the amygdala. These structures are all located close to one another in the medial temporal lobe, which we’ve known for a long time is a critical hub in the brain for memory. The hippocampus, in particular, is essential for forming new memories and recalling old ones, while the perirhinal and lateral entorhinal cortices are hypothesized to play slightly different roles in memory recall (as will be discussed further below). Interestingly, it has been shown that stimulating the entorhinal cortex in epilepsy patients elicited déjà vus more often than did hippocampus or amygdala stimulation [3]. Meanwhile, the amygdala is known to be an important emotion-processing center of the brain that communicates extensively with the hippocampus. Thus, it makes some sense to imagine that the amygdala could be responsible for the emotional aspects of the déjà vu experience.

But what can this tell us about what cognitive processes are being engaged (or malfunctioning) during a déjà vu experience? Let’s revisit and evaluate some of the influential theories of what déjà vu actually is. 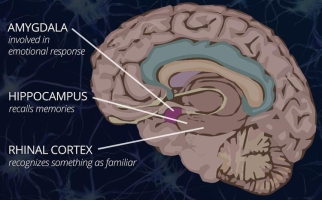 While countless theories attempting to explain déjà vu have been put forward, a few broad categories of ideas have emerged. First, the association between déjà vu and seizure activity in epileptic patients led some, including some big historical names in the field of neurosurgery like Wilder Penfield and John Hughlings Jackson, to speculate that déjà vu experiences even in the normal population could be consequences of small, seizure-like activity in the temporal lobes [1].  However, this theory has been largely disproven, as epileptic patients are no more likely overall to experience déjà vu than healthy individuals [4].

A number of other theories, backed by the major role of the medial temporal lobe structures in déjà vu, postulate that the phenomenon is the consequence of some sort of memory malfunction. One particular idea poses that it reflects a disturbance in the interactions between two separable processes underlying recognition memory: recollection and familiarity. I’m sure I’m not the only one who’s had the uncomfortable experience of running into someone at a party who I know I’ve met before, but I can’t for the life of me recall the precise time or circumstances in which we’d met, let alone their name. This is a quintessential example of familiarity without recollection and demonstrates the dissociation between these two aspects of recognition memory; i.e., you can have one without the other. In fact, it is believed that each of these recognition memory processes may be at least partially distinct and differently engage structures of the medial temporal lobes. While the hippocampus is thought to be critical for memory recollection, the rhinal cortices that we’ve already mentioned may be responsible for familiarity. In support of this idea, there have been case studies of patients for whom either the rhinal cortex or hippocampus, but not both, were removed or damaged who exhibited specific impairments in familiarity or recollection, respectively [5, 6].

The finding that electrical stimulation of entorhinal cortex in epilepsy patients was most effective at eliciting déjà vus [3] created a lot of excitement in proponents of the recollection vs. familiarity theory of recognition memory. After all, the déjà vu phenomenon is characterized by an unexpected feeling of familiarity in the absence of recollection. So, it seemed, déjà vu had been solved!: rhinal cortex goes rogue from the hippocampus and creates false feelings of familiarity in the absence of recollection.

While that’s a nice, seemingly conciliatory explanation, it’s not quite so simple. Evoked déjà vu-like states in epileptic patients don’t engage the rhinal cortices in isolation; instead, they increase different types of correlations between the rhinal cortices and both the hippocampus and the amygdala [7]. Therefore, it seems déjà vu actually involves increased cooperation between the rhinal cortices and other medial temporal lobe structures, not less. Studies from psychology also argue against a simple familiarity-without-recollections explanation, finding absolutely no relationship between any metrics of familiarity or recollection memory and frequency of déjà vu experiences [8].

So what’s actually going on? While there seems to be strong support that déjà vu is essentially a memory phenomenon that engages various memory-related structures of the medial temporal lobe, the precise mechanism underlying déjà vu remains unknown. To synthesize and speculate, it seems likely that some sort of “trigger”, like aberrant activity in the rhinal cortices and/or something in the environment that recruits the rhinal cortices, engages the full recognition network of the medial temporal lobes [7] but in a way that does elicit a specific memory. However, what causes such a “trigger” in healthy individuals who spontaneously experience déjà vu moments in their everyday lives remains elusive. In my mind, I imagine previously-encountered sensory experiences acting as such a trigger, engaging the medial temporal lobe’s recognition machinery in an imprecise way to conjure up that characteristic feeling of familiarity without a complete memory. While this idea is perhaps supported by the fact that déjà vu frequency correlates with a person’s number of travel experiences [1], direct evidence is lacking, largely due to the difficulty of studying déjà vu in healthy individuals.

What little we know about the neurobiology of the déjà vu phenomena comes almost entirely from epileptic patients, but how much can we extrapolate from déjà vus associated with seizure auras to the déjà vus that we experience sporadically in our everyday lives? While some report no qualitative differences between déjà vu experiences in epileptic patients and healthy individuals [9], others indicate significant differences in the EEG signatures (brain signals measured from the scalp) of déjà vu between the two populations [10]. Thus, whether the same neural mechanism underlies every instance of déjà vu throughout the full population cannot be said for sure.

So while we may not know exactly how or why déjà vu happens, we can at least say for certain that it does happen (in most people), it has neural signatures in the brain, and seems to particularly involve the medial temporal lobes. As is so often the case in science, we’re left with more questions than answers; what causes it in healthy individuals? Why do some people experience it but not others? Why does the number of experiences decline with age and correlate with higher socioeconomic class and educational level [1]? And why, in at least one patient with a history of anxiety, was it particularly frequent and then became continuous after a single use of LSD [11]? While I wait for the answers, I for one will continue to relish these moments that are so indescribably bizarre, yet harmless, and leave me filled with awe and a lot of questions.

[9] Warren-Gash C, Zeman A (2014). Is there anything distinctive about epileptic déjà vu?

Parts of the brain: retrieved from https://curiosity.com/topics/deja-vu/

← Stop, You’re Making Me Blush The Rise and Fall and Rise of Genetic Memory →