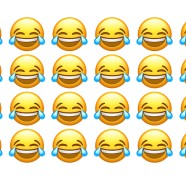 The Neuroscience of Laughter

Posted by Susan Lubejko on August 23, 2018 in Neuroscience, UCSD | Leave a comment

Think back to the last time you had a real, hearty laugh: mouth in a wide smile, eyes crinkled and tearing, breath leaving your body in short bursts if you could get any breath out at all. For humans, there are few more pleasurable experiences or greater expressions of joy as laughter. We use laughter as an expression of personality, as well as a communication tool. Laughter starts in infancy, and we have been giggling for our whole lives since. In fact, the average adult laughs about 20 times per day [1]. But why exactly do we laugh? How does the brain produce laughter at the appropriate times, and what happens when this system is disrupted?

Laughter is thought to be an important part of social bonding. Think back again to the most recent times you have laughed. Importantly, you probably have imagined yourself in a situation with another person or in response to seeing or hearing other humans on different forms of media. Though laughter can occur from funny thoughts independent of other individuals or even out of anxiety or embarrassment, we rarely laugh out loud by ourselves. It has been hypothesized that humans use laughter a lot like primates use social grooming habits. Grooming between primates strengthens important intermonkey bonds. For humans, our social network is far too big to physically groom everyone else. Laughter is our human answer for social bonding [2].

Laughter is mostly involuntary and stereotyped, further contributing to its usefulness in social bonding. Involuntary, true laughter as a result of a funny stimulus (called Duchenne laughter after the French physician Guillaume Duchenne’s work on true versus fake smiles) can easily be distinguished from forced or fake laughter by other humans. The structure of the human laugh, a series of short, 75 millisecond notes during exhalation with intervals of about 200 milliseconds, is maintained on average with some variations between individuals. Laughs start to sound unrecognizable when these values are changed or if some of the notes are missing [3]. Because of the stereotyped and recognizable sound of a laugh between humans, laughter represents an important non-language communication tool that allows us to cast our social nets even wider. Laughter really is the universal language.

Laughter in the animal kingdom

Interestingly, humans aren’t the only species to exhibit laughter during play. Primates, including chimpanzees, gorillas, and bonobos, also chuckle while being tickled by human researchers [4]. The primates produce the laughing sound in conjunction with a relaxed, open mouthed facial expression to show that they are playing and do not intend to do harm. The structure of their laughs differs from ours, however. Instead of short notes present during exhalation of air, primates tend to produce sounds both during inhalation and exhalation, resulting in a laugh that resembles panting. In a test of the cross species translation of laughter, very few college students are able to correctly assign the sound to the laughter of a primate without other relevant visual cues. The panting sound is probably a result of primates’ relatively recent evolutionary move away from quadrupedalism, or walking on four legs. Quadruped breathing is necessarily related to limb movement as the whole body stretches and contracts with the movement of the legs, so each breath is used most efficiently as one vocalization. Human breathing and laughter are achieved independently of limb movement, which is why our laugh may sound vastly different from the animal kingdom’s [3]. 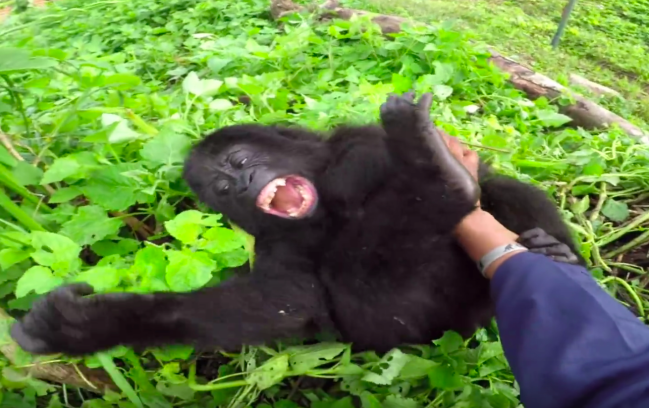 Check out the first minute of this video to see baby gorilla laughs in action!  (Source: GoPro on YouTube)

Recently, in a 2016 study of laboratory rat ticklishness, researchers also found that rats emit ultrasonic vocalizations while being tickled on the belly and back by a trusted human. Additionally, rats emitted the same vocalizations (which can be heard here after the vocal responses had been transposed to the human auditory range) during play which involved rats chasing a researcher’s hand placed into their environment. Isolated and stressed rats don’t vocalize in this way, further showing that rats may also participate in the social bonding of laughter [5].

Laughter and the brain

The study of laughter as a field of neuroscience is not new, but has only recently gained serious momentum in the lab. Robert Provine, an eminent laughter researcher at the University of Maryland Baltimore County, terms his preliminary studies of laughter “sidewalk neuroscience,” as his methods consisted of nothing more than recording the laughter of humans in public places in order to describe the characteristic sound structure of laughs and determine the situations in which laughter is elicited. Additional historical studies, as with many fields of neuroscience, used the dysfunction of laughter in patients with brain lesions to determine important brain areas for laughter production.  Newer studies seek to use human neuroimaging techniques to understand the neurological effects and production of normal laughter.

It has been difficult to determine an exact location in the brain responsible for laughter. Based on observational evidence of behavior, researchers believe that the brain probably has “laugh detector” and “laugh production” machinery due to our keen sensitivity to hearing laughter from others. Initial efforts to determine the key neuroanatomical area for either mechanism involved studying humans with pre-existing neurological diseases that also exhibited abnormal laughter. For instance, gelastic seizures, seizures that cause spontaneous laughter or crying, have shown that the hypothalamus, the hormone-releasing brain area important for body temperature regulation, hunger, and other involuntary functions, may be involved in laughter production, as these seizures are often caused by benign tumors in this brain region. However, the same laughter outbursts can be caused by seizures in the frontal and temporal lobes of the cerebral cortex. It has been mostly agreed upon that laughter is probably a result of the activity of many different brain areas that route through the periaqueductal gray, a brain area implicated in pain modulation and defensive behaviors, so that the signals from other brain areas important for facial expression, respiration, and other aspects of laughter can be combined [6].

Additional research has looked at the connections between laughter, social bonding, and the brain. Notably, a research group used positron emission tomography (PET), a human imaging technique that can reveal where specific radioactive chemicals are being used in the brain, to show that many areas of the brain release natural opioids after 30 minutes of laughter with friends. These opioids occur naturally and, similarly to opiate drugs binding to opioid receptors in the brain, can produce that feel-good mood that reinforces laughter and social bonding [7].

Adapted from [7] Manninen et al., 2017, PET imaging reveals areas of the human brain where endogenous opioids are released (hot colors) following social laughter as compared to people that didn’t laugh with friends before the test.

Finally, though much less evidence exists in the lab, the phenomenon of contagious laughter can give us a clue about other neurophysiological events that could be taking place during laughter. We are all familiar with contagious effects of laughter as we begin to chuckle simply because someone else is. In a study of college students lead by Dr. Provine, hearing a recording of laughter was enough to get many students laughing or smiling [8]. In cases of other “contagious” phenomena, like yawning, neuroscientists point to the activity of mirror neurons, neurons in the brain that are active both when an individual is doing a task and when the individual sees another doing the same task. Although there is no existing evidence of these neurons’ responsibility for contagious laughter, a growing number of laughter neuroscientists believe mirror neurons could explain our inability to suppress a giggle during class once one student starts laughing.

Laughter is the best medicine

For so many reasons, laughter is an important part of being human. As social creatures, our ability to bond with a wide network of other individuals relies in part on laughter. In addition to the general feeling of well-being that accompanies laughter, it also has been shown to boost physical health by decreasing the circulation of stress hormones and increasing the population of immune cells important for fighting illness [9]. Proponents of an exercise called laughter yoga, in which students laugh with others in a group while acting out silly motions, report that the exercise decreases clinical blood pressure levels, decreases stress, and improves overall well-being.

So go ahead; take the time out of your busy day to recall your funny memories with friends over lunch and get in a few social bond-inducing, stress relieving belly laughs.