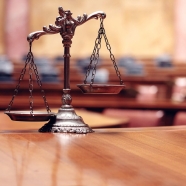 In 2006, a grand jury convicted Evan Miller in a homicide case, sentencing him to mandatory life imprisonment without the possibility for parole. At the time of his crime, Evan was 14-years-old. 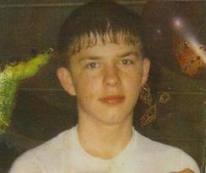 Years later, after a series of appeals, Evan’s case–Miller vs. Alabama–made it to the Supreme Court, which ruled that a sentence of life without parole for juveniles was unconstitutional. In 2016, the Supreme Court further ruled that the Miller decision could be applied retroactively to the approximately 2,100 people convicted as children before Miller and still serving life sentences.

So, what do you think? If a middle schooler commits a serious crime, should he be considered any less culpable than an adult? Surely, by the age of 14, Evan knew better than to kill someone, right? Neuroscience says it’s not quite that simple.

Human adolescence is undoubtedly a tumultuous period–hormones are raging, social pressures are high, and teens are fighting for independence while not necessarily ready to shoulder the accompanying responsibilities. As children grow both in size and maturity, so do their brains. Interestingly, this brain growth does not occur evenly across different brain regions. The more primitive structures such as the sensory and motor cortices mature earlier in development, while more recently-evolved regions–such as the prefrontal cortex–are still developing into a person’s early 20s [1].

This means that there is a period during adolescence in which the brain is perfectly capable of experiencing and reacting to emotional cues but has not yet fully developed the capacity to suppress that emotion while making decisions. More specifically, a well-supported theory in developmental neuroscience [reviewed in 2] suggests that teenagers are more sensitive to dopamine-driven function, meaning that they are more readily motivated to seek a reward than an adult might be. At the same time, they unfortunately have less ability to override that motivation, unable to properly weigh reward vs. risk. Their “suppression” circuit has not yet fully matured. A series of studies from renowned neuroscientist Dr. BJ Casey supports and extends this notion.

How do scientists go about studying reward-seeking, decision-making, and emotional sensitivity in the lab? One popular, widely-used task in cognitive laboratories is called the go/no-go task. Human participants watch images flash before them on a computer screen. They have been given particular instructions to press a button in front of them to certain cues and withhold the button press for other cues. By gathering data on the accuracy of their responses and the time it took to make those responses, researchers can make inferences about the subject’s sensitivity to particular cues as well as the speed and accuracy of their “suppression” response.

[From Somerville et al. [3]]: “Schematic of four trials within an fMRI run. In this example, calm faces are the target stimuli, for which participants should `go’ by pressing a button. Happy faces are the nontarget (`nogo’) stimulus, to which participants should withhold a button press. Each face was displayed for 500 ms followed by a variable intertrial interval. Words above faces in quotes are not displayed during the experiment.”

In a 2011 study, Dr. Casey’s group had children (age 6-12), teens (age 13-17), and adults (age 18-29) perform a go/no-go task in which participants were supposed to press a button when a calm face appeared on the screen but withhold the button press when a happy face appeared. Teens–compared to both children and adults–had strikingly higher rates of “false alarms,” meaning they were more likely than the other two age groups to mistakenly press the button when seeing a happy face, unable to suppress the button press (Figure 2) [3]. 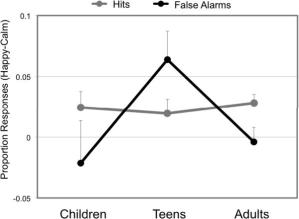 Participants completed this task during an fMRI session, an imaging technique used to identify which regions of the brain are active during a particular task. Regardless of whether the subject pressed the button or not, teens also had significantly more brain activity in the ventral striatum–known for its involvement in reward and motivational salience–than children or adults [3]. The higher false alarm rate coupled with the imaging results lend support to the idea that teens are more sensitive to the brief, positive, emotional reward of seeing a happy face and less able to suppress actions associated with that reward.

When Does Cognitive “Adulthood” Begin?

As is quite customary in the field, the study described above categorizes anyone age 18 and older as an “adult.” However, we know that the brain is not finished developing by age 18. You might be tempted to think this is an issue of mere semantics, but when you think about brain development in the context of juvenile criminal activity and punishment, the issue clearly transcends semantics. What is the age cutoff at which the law should treat a criminal as an adult?

A subsequent study from the Casey lab sought to answer this question [4]. Participants were split into three different age groups: teens (age 13-17), young adults (age 18-21), and adults (age 22-25). In an adaptation of the go/no-go task, participants pressed the button to calm faces but withheld the button press when viewing fearful or happy cues. This was done either in a neutral state or with the added expectation of a negative stimulus (an aversive sound) or reward stimulus (a cash prize).

[From Cohen et al. [4]]: “In a given run, participants were instructed to respond to one type of cue (go trials) and not to respond to another (no-go trials). These cues were presented within blocks of sustained negative emotion (anticipation of an unpredictable aversive noise), positive emotion (anticipation of an unpredictable monetary reward), and neutral emotion (no event anticipated); the block type was indicated by the background color of the screen (yellow, blue, or purple).”

Taken together, the two studies described here underscore an important message: both teenagers and young adults act differently than older adults in emotionally charged situations. This idea was reinforced in a later study showing that, in emotional contexts, teenagers regressed to a more characteristically childlike pattern of brain activity and task performance than in neutral contexts [5].

Even though an 18-year-old might be considered an adult in society, his or her brain is still most certainly still honing its cognitive ability to integrate and react to the world.

As you might imagine, the findings detailed above are extraordinarily relevant to the treatment of juveniles in courts of law. In light of these studies, it is clear that both the age of the individual and the context of the crime should be taken into consideration when determining the extent of culpability and legal consequences.

While some scientists might focus solely on their science and leave the activism to others, Dr. Casey and her trainees take it upon themselves to effect change. Drs. Cohen and Casey published a piece about the implications of their field’s findings for juvenile justice: Rewiring juvenile justice: the intersection of developmental neuroscience and legal policy. Furthermore, Dr. Casey has presented her work on the adolescent brain to congressional staff on Capitol Hill, to the Washington State Supreme Court, and to federal judges around the country [6].

Now, let’s return for a moment to Evan Miller. He was sentenced to spend his life in prison for a murder committed when he was 14 years old. Not only was Evan young, but he had had a traumatic upbringing involving physical and emotional abuse, which unequivocally affects brain development. In both his age and circumstance, Evan’s case is rather extreme, and the science (and common sense!) leads us to the conclusion that he was surely not entirely culpable for the crime he committed. But perhaps even in cases in which the defendant is a bit older–say 18, or even 21–judges should consider being a bit more lenient.

Of course, this is not to say that crimes committed by teens and young adults should go unpunished. However, the punishment should take into account the fact that their brains–particularly their capacity for cognitive control–are not fully developed. In a few years, these teens and young adults may not pose as great a risk to society. We may need to reconsider our definition of “adult” in the context of the brain and its developmental maturity.

Our neuroscientist readers should be sure to check out Dr. BJ Casey’s featured lecture at SfN this year!