Home » Uncategorized » Children on your mind… and in your brain 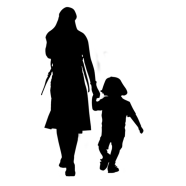 Children on your mind… and in your brain

Posted by Catie Profaci on November 29, 2019 in Uncategorized | Leave a comment

There is something uniquely strong about the bond between mother and child ­– you might say that a mother always has her children on her mind and in her heart. ­But did you know that a mother might quite literally have a bit of her children in her brain and heart? (And also her lungs, blood, bone marrow, thymus, etc.)

A Little Bit of History

The idea of an exchange of cells between fetus and mother was first proposed over 100 years ago in an 1893 publication by Dr. Georg Schmorl [1]. Schmorl did autopsies on 17 women who had died from eclampsia, a condition that causes seizures in pregnant women who have elevated blood pressure (“pre-eclampsia”). He noticed something peculiar – there were giant cells with multiple nuclei in many of the women’s lungs. This type of cell is rare, but similar giant cells occur in a particular part of the placenta right at the barrier between the maternal and fetal bloodstreams. Schmorl reasoned that the strange, giant cells in the lung might have escaped from the fetus into the maternal blood. To test his hypothesis, he isolated some placenta from pregnant rabbits and injected it into other rabbits. The injection often caused a seizure, mimicking eclampsia [1]. While it wasn’t full proof of his hypothesis, it was evidence that he was on the right track. It seemed as if the placenta was the source of the issue.

In the 1970s, a study identified cells with a Y chromosome (only present in males) in the bloodstream of healthy women pregnant with baby boys [2], providing evidence that cells from the fetus often end up in the maternal bloodstream even in the absence of pregnancy complications. And a mere 105 years after Schmorl’s experiments, a study confirmed higher counts of fetal cells in the blood of pregnant women with pre-eclampsia [3]. The precise mechanisms underlying onset of eclampsia are still unknown, but it is widely thought to occur because of a problem in the interaction between the placenta and the mother’s uterus.

During a healthy pregnancy, different types of fetal cells called “trophoblasts” take on different roles in the placenta, interacting with maternal cells. Some help the mother’s immune system to tolerate the foreign being growing inside her uterus [4], while others integrate into the spiral arteries of the uterus, remodeling and enlarging the blood vessels to help ensure sufficient blood flow to the growing fetus [5]. Interestingly, it has been suggested that a failure of this uterine artery enlargement can increase the mother’s blood pressure, causing pre-eclampsia [6-8].

With such an intimate interaction between a mother’s cells and a fetus’ cells in the vasculature of the uterus, it is easy to imagine that some fetal cells might escape into the mother’s bloodstream. These are not necessarily the giant cells that surprised Schmorl – those were one specific type of trophoblast, but not all trophoblasts are big cells with multiple nuclei. Regardless of their size, because these cellular escapees originate from a developing fetus, they are often immature cells capable of becoming lots of different types of cells in the mother’s body. And these fetal cells stick around – cells with a Y chromosome were once found in the blood of a woman who had given birth to a son 27 years earlier [9]!

While blood samples and autopsies have provided evidence for the presence of fetal cells in mothers, it is difficult to study this phenomenon further in humans as there is no easy way to trace fetal cells to see where they end up in the mother. Thus, scientists have turned to mice. Green mice, in fact.

All of the cells of these “green mice” have been engineered to express green fluorescent protein (GFP). The mice look and act perfectly normal, but under a UV light, all the cells in their body are bright green. To study fetal cells in a mother, researchers mate a green male mouse with a normal (non-green) female mouse. Because “greenness” is encoded in the male mouse’s DNA, the embryo created by the pair will also be green. Just as in humans, the fetal and maternal cells interact at the border of the placenta and uterus, enlarging the spinal arteries and teaching the mother’s immune system not to attack. The key is that because the mouse embryos are green and their mother is not, any green cells later found in the mother must be derived from the embryos. Using this method, researchers have discovered that fetal cells can get into the mother’s blood, travel to different organs, and become a wide range of cell types including fully functional white blood cells in the mother’s bloodstream able to respond to infection [10], endothelial cells in the mother’s blood vessel walls [11-12], and even neurons and glial cells in the brain [13-14].

One particular study focused on the hippocampus. On the same day that the mouse pups were born, researchers found GFP+ cells (cells of fetal origin) in the brain of 17% of mouse mothers. By the time the pups were one week old, 67% of the mothers had GFP+ cells in their brains, and these cells stayed around – they were still found over seven months after the birth of the litter. These green cells were clearly neurons and matured accordingly, sprouting dendrites and axons – the extensions neurons use to talk to one another – over time [13]. Another similar study found that fetal cells also differentiated into glial cells, expressing markers for mature oligodendrocytes and astrocytes [14].

Fetal Cells to the Rescue

So are these fetal invaders helpful or harmful? It used to be assumed that they were harmful, and several studies have suggested links between fetal cells in the mother and autoimmune diseases – diseases in which immune cells are misprogrammed and attack a person’s own tissue [15-16]. However, these studies do not show causal evidence, and from more recent studies it appears that fetal cells that escape into the mother might instead be helpful.

One study found that while mice that have given birth to multiple litters have the same number of microglial cells (the brain’s immune cell) as virgin mice, their microglia are slightly less reactive [12], possibly leading to less chronic brain inflammation. While the mechanism of this dampened reactivity is not clear, it could be related to fetal cells’ interacting with the mother’s immune system, convincing her not to attack the foreign body growing in her uterus. Interestingly, another study in humans found that the number of babies a woman has had negatively correlates with how old her brain looks via MRI. Essentially, the more children a woman has had, the “younger” her brain appears to be [17]. While there is no evidence connecting these two studies, one could imagine that a decreased inflammatory tone might play a role in maintaining a younger looking brain.

[Note: Please do not take this as advice to have as many children as possible to keep your brain young! This negative correlation between children number and brain age held true until 5 children, at which point the effect seems to slightly reverse. Perhaps the stress of having 5 children is not cognitively beneficial!]

Fetal cells are not just helpful in talking down the mother’s immune system. A fascinating study showed that fetal progenitor cells migrated (likely from the mother’s blood or bone marrow) to the site of injury in mice who had strokes. The cells then differentiated into endothelial cells, the cells that make up the blood vessel walls [12]. Others were found hanging out in the brain around the stroke area, more rounded in shape, likely some type of glial or immune cell. The researchers compared mice that were mothers and those that were not and found that the extra vascular cells made a difference – there was more creation of new blood vessels in the stroke area in the mothers compared to the non-mothers. This helps re-oxygenate the area that was deprived of oxygen during the stroke. There was a functional effect too; 72 hours after the induction of the stroke model, the mother mice had better motor function recovery, and their motor function was correlated to the amount of new blood vessels they had. A mother’s children can care for her in the most unexpected ways!

The interaction between a mother and her child on a cellular level is intricate, intimate, and wildly interesting. There is still so much unknown about the fate of fetal cells that escape into a mother during a healthy pregnancy and birth. How many of them are there? Where do they go? What are they capable of? How do they get past the blood-brain barrier? At least from what we know so far, it seems that they are not cause for too much concern. So this Thanksgiving, remind your mother to be thankful that a little bit of you might be in her heart and in her brain.

← The Brain on Gratitude When it gets dark, people get SAD (seasonal affective disorder) →