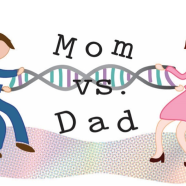 Genomic Imprinting: A Genetic Custody Dispute for Your Brain

During this holiday season, we would do well to reflect on what we’ve inherited from our parents. You might have your mother’s sense of humor but your father’s sense of direction. You and your Ma might share the same tastes in music, but you prefer your Pa’s tastes for ice cream. Although heavily influenced by what we experience throughout life (nurture, some might say), many of our preferences and predilections have a genetic component, thrust upon us like a haircut in the 4th grade by ol’ mom and dad.  We are, of course, more or less a blend of the genetic information passed on to us from half of our mother’s and half of our father’s genome, and classic genetics would assume that a gene’s effects are independent of its parental origin, but that is where classic genetics would be wrong. Research has shown that some genes have different effects depending on whether the gene was inherited via a sperm or an egg, a phenomenon known as genomic imprinting. An imprinted gene could be a gene that is preferentially expressed from one parent over the other, or it could be a variation in a gene that has a different effect depending on if you inherited it from mom or dad. For example, you might find a gene where only the copy from mom is being used in certain tissues and the father’s copy is silent. In this case we would say that the gene is maternally imprinted. To date, over 150 genes have been implicated in genomic imprinting in humans, influencing critical pathways in brain development and behavior.

Genomic Imprinting is Common in the Brain

Although initially thought to affect all tissues equally, genomic studies in mice have discovered that imprinting varies throughout the body and is more prevalent in the brain than any other tissue [1]. In addition to being very common in the brain, there is also a large amount of variation within different parts of the brain as to which parent’s copy dominates, with mom controlling some regions and dad controlling others. For example, the appetite-controlling hypothalamus has a higher frequency of imprinted gene expression than any other brain region [5]. As many imprinted genes are associated with feeding behaviors, the hypothalamus is thought to be especially sensitive to imprinting effects. Many paternally inherited genes dominate the midbrain and hindbrain regions, increasing growth and feeding behaviors in mice. The cortex also exhibits highly imprinted expression patterns, though preferentially from the maternal copy [1]. Interestingly, this maternal imprinting is associated with an increase in cortical size, so one might say we inherit our appetite from dad and our higher cognitive functions from mom. These patterns aren’t static, however, and as we develop through adolescence into adulthood some regions switch from maternally to paternally imprinted or vice versa, suggesting that imprinting could be a common mechanism employed across the brain to tightly regulate proper development.

In addition to studying the genetics of imprinting, researchers have also begun to appreciate behavioral changes induced by imprinting. Interestingly, social behaviors appear to be particularly influenced by imprinting, and many imprinted genes are considered prime candidates for involvement in disorders of human social interaction such as autism and schizophrenia [6]. For example, mutation of the paternal Peg1 (a gene expressed almost exclusively in the nervous system) causes a severe lack of maternal care in mothers, purportedly through reduced vocalization of pups harboring the mutation]. A deletion of paternal Peg1 reduces the total number of oxytocin-secreting neurons and masks normal sex specific differences in regions of the mouse brain associated with sexual behavior, olfaction, and pheromone processing. In contrast, loss of maternal Phlda2 in offspring led to an increase in maternal care behaviors [6]. Mice lacking maternal Nesp made more impulsive choices than their unaffected siblings, but mice lacking paternal Grb10 made fewer impulsive choices, uncovering an interesting case of opposing imprinted behavior [9]. Perhaps there’s some truth to your mother’s assertion that you get your impulsiveness from dad’s side of the family.

Ongoing studies are attempting to understand the evolutionary benefit associated with parentally imprinted behaviors, as ultimately genetically determined behaviors that benefit the father’s side of the family would be expected to be favored by natural selection when that gene is transmitted by a sperm but not when the same gene has been transmitted by an egg. Therefore, imprinted genes’ influence on behavior could be a clash in evolutionary fitness interests between competing genes from mom and dad. Sheesh talk about family drama.

In humans, some of the first recognized examples of imprinting defects came from neurological diseases. Prader-Willi syndrome results from the disruption of one or more paternally inherited genes on a portion of chromosome 15, and is characterized by mild retardation, impaired satiety, and compulsive behavior [3]. In contrast, Angelman syndrome is caused by the disruption of the maternally inherited copy of the same chromosome 15 region, but is characterized by severe mental retardation, ataxia, and frequent laughter [3]. This provides a striking example of how specific parent-of-origin changes can have disparate effects on normal brain development and behavioral control. The literature is rife with examples of the effects of imprinting in humans. A population genomic study of children with language impairments found a significant parent-of-origin effect at two genome locations previously associated with schizophrenia and autism [10]. Girls with only one X chromosome (Turner’s syndrome) who inherit their X from their mother score higher on a scale of social dysfunction than do those who inherit their X from their father [4]. Even cancer is implicated, as numerous tumors are associated with the preferential loss of a particular parental chromosome, indicating the involvement of imprinted genes [2]. Although the precise molecular mechanisms explaining many of these imprinting effects remains to be defined, their prevalence encourages future research.

The Future of Imprinting

There is still much more work to be done to understand the causes and consequences of genomic imprinting. The steadily increasing discoveries of imprinted genes suggests that we are only beginning to appreciate the scope of this phenomena. At its heart, genomic imprinting reveals a conflict in the evolutionary interests between mom and dad for influence on their children. Typical. This apparent greediness belies the larger story, of parents giving their kids the best possible genetic shot at success in this uncertain world. Who can blame them for going about it in their own way?

← A Switch in the Brain for Compulsive Drinking Open Borders: Remapping the Brain →