Home » Social Neuroscience » How is your brain coping with social distancing? 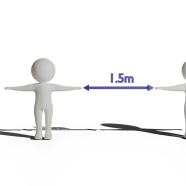 How is your brain coping with social distancing?

Posted by megkirch on March 26, 2020 in Social Neuroscience | Leave a comment

Amidst an ever-growing national and global crisis unleashed by the COVID-19 pandemic, you’ve probably already heard about (and are hopefully practicing) social distancing. The Center for Disease Control defines social distancing as “remaining out of congregate settings, avoiding mass gatherings, and maintaining distance (approximately 6 feet or 2 meters) from others when possible”. But in the last few weeks in the United States, this term has gone from vague and abstract to all too real. As of this writing, schools have closed, most workplaces have transitioned to work-from-home only, and many cities and states have enacted strict lockdown measures to try to curb the spread of the virus.

At this point, you’ve likely already been hunkering down and spending a lot more time in your home than you ever have, and a lot less time in the presence of friends, family, and others in social settings. So, how are you holding up? Are you longing for the days of meeting your friends at the bar, going out to the movie theater, and generally being blissfully unaware if you are within six feet of another human? Are you feeling a little lonely, or maybe a lot? While we in no way seek to discourage social distancing (#FlattenTheCurve), for some of us here at NeuWrite, thinking and writing about what’s going on in the brain is our go-to coping mechanism.

How are our brains processing and reacting to this sudden change to our social lives? Perhaps not unlike they would if we were suddenly deprived of food or water. It has been proposed that similar to how our brains work with the rest of our bodies to maintain physiological homeostasis, they are also acutely sensitive and responsive to changes to our normal levels of socialization – a phenomenon referred to as social homeostasis [1].

Social homeostasis, like other typical homeostatic systems, involves three main components: a detector that recognizes a change to one’s social situation, a control center that registers the change in socialization relative to where it should be (the “set point”), and an effector that controls what one does to get back to that social set point [1]. Where exactly these components lie in the brain is not well understood, but almost certainly each component involves many brain regions.

For instance, there are many possible responses that I might make to my new social situation; I might feel inspired to finally call that friend I’ve been meaning to catch up with (social motivation), or I might be particularly anxious of and sensitive to strange nighttime sounds outside my apartment (hypervigilance), or I might begin to fill the social void in my heart with excessive Netflix, food, alcohol, etc (passive coping). Each of these responses – and likely others – are proposed to involve different effector systems. Of these, the effector system for hypervigilance is particularly well studied. A number of regions – from the hypothalamus to the pituitary gland to the adrenal cortex – are collectively referred to as the HPA axis. These areas are well known to be highly engaged – resulting in increased levels of cortisol and other hormones – in instances of great stress and communicate extensively with other brain circuits involved in arousal and attention. The fact that they are also activated during social isolation suggests that this pathway is likely involved in some of the stress-related responses you may or may not be experiencing as part of social distancing [1].

Social motivation in particular has come into conflict with the social distancing movement, as evidenced by the many pictures of people continuing to pack bars even as the pandemic was crescendoing. Social motivation can come in at least two forms: seeking out social interactions that are rewarding, and avoiding the negative sensation of loneliness (think of it as whether, pre-COVID-19, you went out because you really wanted to hang out with friends and/or meet new people, or just because you didn’t want to be alone on your couch on a Saturday night). These two flavors of social motivation have distinct valances (seeking out something good versus avoiding something bad) and involve dopamine signaling in distinct brain pathways. Some of the rewarding aspects of social motivation seem to be mediated by dopamine neurons that project from the ventral tegmental area (VTA) to the nucleus accumbens; stimulating these neurons causes mice to spend more time investigating a stranger mouse, whereas inhibiting them has the opposite effect [2]. In contrast, the “I need to get off the couch” aspect of social motivation seems to be driven by a different population of dopamine neurons in the dorsal raphe nucleus. In a study described in greater depth in a previous NeuWrite post, the activity of these neurons was causally related to mice’s increased preference towards social (versus non-social) cues after being socially isolated for 24 hours. Yet these neurons’ activity seemed to convey a negative social signal (likened to “loneliness”), as mice avoided getting an artificial activity boost to this neural pathway [3].

After a short period of social isolation as in the previous study, animals act as though they’re lonely and show increased social preference but otherwise seem relatively normal. But already COVID19-driven social distancing has gone on for much longer than a day – what happens at longer timepoints? Another recent study found marked behavioral changes in mice that were socially isolated for two weeks – increased aggression towards an “intruder” mouse, heightened reactivity to a footshock, prolonged freezing to a potentially threatening stimulus, and more. These behavioral changes were linked to heightened signaling and production of a neuropeptide called tachykinin 2 in multiple regions of the brain. Remarkably, when mice were given a drug that blocked the tachykinin receptor, the behavioral changes from two weeks of social isolation were substantially attenuated [4].

In summary, social information is highly salient in the brain, and changes in one’s social surroundings spark powerful neural signals meant to maintain one’s “social homeostasis”. Given the extenuating circumstances presented by the novel coronavirus, our behavioral responses to our sub-optimal social situation are limited. So what happens if we have to keep on social distancing for many months ahead, as some models predict? First, the bad news.

Unfortunately, the prognosis for long-term social isolation is…not good. It has been linked to elevated risk of heart disease [5] and even higher mortality rates [6]. This may be due in part to the established, and surprising, effects of loneliness on inflammation. Chronic loneliness is associated with the up-regulation of inflammatory and down-regulation of anti-viral gene expression in white blood cells in humans, and these changes in gene expression and their consequences have been shown to render animals more susceptible to some viral infection [7]. Not exactly the ideal outcome when our whole goal is to prevent the spread of a promiscuous and dangerous virus.

Long-term social isolation can have other, equally surprising effects on the brain in particular. For instance, even practices that are usually good for our brains – like exercise – can turn bad when combined with social isolation and additional stress. In healthy, adult mice co-housed with other mice, running increases the birth of new neurons (neurogenesis) in the dentate gyrus of the hippocampus – an area critical for memory and one of the few sites of neurogenesis in the adult brain. However, for mice that were socially isolated, running ceased to have a positive effect on neurogenesis and could even have a negative effect when combined with daily stressors. These effects were attributed to elevated levels of glucocorticoids – a particular class of brain hormones – that normally suppress neurogenesis but whose deleterious effects are buffered by social interactions [8]. While we don’t know for certain whether this also happens in humans, some limited evidence suggests that it may. For instance, nine polar expeditioners received MRI scans before and after their 14 month stay at a remote station in Antarctica, the majority of which time was spent in isolation (sound familiar?). Compared to age-matched control subjects over the same period of time, the expeditioners exhibited a significant reduction in the volumes of their dentate gyrus [9] – the same area that showed reduced neurogenesis in stressed, socially-isolated, running mice.

Certainly, these studies should be cause for concern if the current level of social distancing continues to stretch on for many months to come; simply put, long-term social isolation is bad for our bodies and our brains. But before we begin to despair, there is a critical distinction that begs to be made and which, with our 21st century technology, could be our saving grace.

Being social while social distancing

While the threat of coronavirus means we can’t maintain the same sorts of social activities that we did even a month ago, social distancing doesn’t have to equal social self-isolation, in the subjective sense. In other words, you can nurture your social connections even at a safe distance. Thanks to technology, we’ve got phones, social media, Zoom, and other ways of keeping in touch (Netflix Party even allows us to pretend like we’re having a movie night together!). So, try your best not to despair and do what you need to do to maintain your social homeostasis within the confines of responsible social distancing. That’s not to say it’s going to be easy; not everyone will respond to restricted socialization in the same way, nor does everyone have equal access to these alternate means of communication, so whatever you can do to support yourself and others will go a long way for our collective well-being. We may be in this for the long haul, so do what you can to stay happy and healthy, in both body and mind.

← Is anyone in there? Working With Distractions →