Diffusion MRI: Mapping the structural highways of the brain

Some of my favorite scientific images to look at come from scanning the human brain with a tool called diffusion magnetic resonance imaging (or diffusion MRI). These images depict the long fibers that connect one part of the brain to another in a color-coded fashion, with a beautiful result: a colorful map of the brain’s structural highways.

What is diffusion MRI?

Generally, MRI is a tool that uses a magnetic field to produce images of biological tissues and organs. For the purposes of this article, let’s focus specifically on the brain. One of the main types of cells in the brain is the neuron, which is made up of the cell body (where most of the signal processing occurs), and the axon (which carries the signal from the cell body to other neurons). The cell body also has dendrites, which collect the signals being sent by the axons of other neurons to send to the cell body. 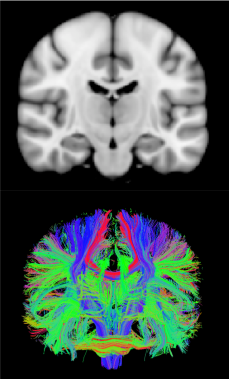 The “gray matter” of the brain is made up primarily of cell bodies and dendrites of neurons. The “white matter”, on the other hand, consists of bundles of axons which connect different parts of the brain with each other. These types of brain matter are named this way because axon bundles are wrapped in a fatty tissue that makes them appear white compared to the rest of the brain. In the top image to the right, you can see a separation of gray and white matter, with gray matter on the outer surface, or cortex, and white matter in the interior. In the bottom image, the colorful fiber bundles represent white matter pathways. They can span across large regions of the brain, allowing for communication between different areas of the cortex.

Diffusion MRI is a specific form of MRI which allows us to look at these white matter pathways. This is a very powerful tool, because it allows us to non-invasively study the structural connections of a living human brain, which we cannot do otherwise. Using diffusion MRI, we can develop models of brain connectivity, study how the structure of the brain matures and degenerates, and better understand human brain dysfunction and disease.

How does diffusion MRI work?

The way diffusion MRI allows us to characterize the brain’s white matter is by measuring the diffusion, or the random motion, of water molecules (technically, we are measuring the diffusion of hydrogen protons, but the majority of these are in water molecules). The diffusion of water in any particular location in the brain depends on the cellular environment. In gray matter (depicted as cell bodies randomly distributed in the top left), diffusion is fairly random and uniform in every direction since there aren’t many organized structural barriers. This is called isotropic diffusion (middle left). On the other hand, in white matter (depicted as a bundle of axons in the top right) water tends to diffuse more easily along the length of the axon. This is because the fatty tissue around the axons acts as a structural barrier to prevent water from diffusing out radially. This very directional form of diffusion is called anisotropic diffusion (middle right). You might imagine this by thinking of the white matter as a bundle of straws; water is going to flow through the length of the straws much more easily than it will flow out through the sides of the straws (anisotropic diffusion). On the other hand, if you imagine the grey matter as a pile of beans, water will flow out equally in all directions between all the nooks and crannies of the individual beans (isotropic diffusion).

A more realistic way to think of this is to imagine letting a drop of ink fall onto paper. If you let the ink fall onto tissue paper, which is very soft and absorbent (to be comfortable for our noses!), the ink will spread out randomly and form a circle (i.e. isotropic diffusion; bottom left of above image). However, if you were to let the ink fall onto newspaper, which is much more rough and structured, the ink would follow the fibers of the paper and the pattern would be more oval-shaped (or anisotropic diffusion; bottom right of above image) [1]. This example gets at the heart of what diffusion is: “the erratic random movement of microscopic particles… as a result of continuous bombardment from molecules of the surrounding medium” [2].

Because the surrounding medium in white matter (the axon bundles) is very different than in grey matter, diffusion is going to look different in these regions. We can see this when looking at what is called an anisotropy map, shown below.

In this figure, we are looking at vertical cross-sections of a human brain (the sections on the right are at the level of the green line in the left image). Look first at the image in the middle, which is a map of anisotropy. The brighter the pixel in this image, the more directional the diffusion is. Because diffusion is more anisotropic in white matter, we see that the white matter appears brighter than the grey matter. The image on the right is also a map of anisotropy, but the pixels have been color-coded depending on what direction the water diffuses – in other words, the direction in which the axon bundles are traveling. Green represents fibers going from the front of the head to the back of the head, or vice versa. Red represents fibers traveling from left to right, or vice versa. Finally, blue represents fibers going from the top of your head down to your spine, or vice versa. Note that we cannot tell where the diffusion starts and ends (we do not know, for example, whether diffusion starts from the left and goes to the right, or starts from the right and goes to the left), so we do not actually know the true direction in which the water is traveling; rather, we can only tell if it is traveling more along a certain axis than another. The process of using this directional information to reconstruct the actual fiber pathways of the brain to produce images like the header of this article is called tractography (“mapping of [white matter] tracts”).

What is diffusion MRI used for?

Diffusion MRI has both research and clinical applications. In research, scientists use the tool to study how structural connections are affected in development and aging; white matter tracts in the brain mature during development and degenerate in aging, and these patterns are reflected in the diffusion measurements taken in the MRI scanner. Further, scientists study how these patterns are affected by various disorders and conditions. For example, diffusion MRI has become the tool of choice for examination of people who have suffered from traumatic brain injuries, which are thought to subject the white matter to stretching and shearing, and eventually disconnection [3].

In the clinic, diffusion MRI is one of the most sensitive tools for early detection of stroke, which causes changes in the space inside and outside of the cells and results in inflammation. The tool is also being used to help differentiate types of brain tumors, as they show different patterns of water diffusivity and disrupt the flow of fiber pathways. Finally, diffusion MRI is also used in surgical planning, as it reveals displacements in the white matter that can help aid surgeons in locating tumors (demonstrated below) [4].

There are limitations in the types of questions we can ask about the brain using any type of MRI. For example, if we see that anisotropy is reduced in a particular condition (like after a traumatic brain injury), we don’t know exactly what’s going on at the cellular level to affect that change. That’s where cell and molecular research comes into play. However, we are very limited in the tools we can use to study humans while they are alive. We (usually) can’t simply cut into their brains to see what’s going on. Consequently, we have to develop tools to estimate what’s going on inside of the brain from the outside.

I have always been drawn to the beauty of using the movement of water to recreate the fanning, tree-like architecture of the brain’s structural highways. I’m not the only one; the rock band Muse used an image generated from diffusion MRI as the cover art for their album “The 2nd Law” (below left). Aside from the colorful images produced by diffusion MRI, there is a simple beauty to the white matter itself. Artist and scientist Greg Dunn uses a technique called microetching to create stunning, reflective illustrations of human white matter. This image in particular (below right), part of a project called “Self Reflected”, shows how the axonal bundles branch out like a tree.

Left: Muse’s cover for album “The 2nd Law”. Right: “Self Reflected” from www.gregadunn.com

And really, the science that makes you see the beauty and art in life itself is the best kind of science.

← Racism and Birth Inequities, From Biology to Society Meet Marta Pratelli – A Researcher Exploring the Roadmap of the Brain →