Home » neuropsychology » The Fear of Missing Out 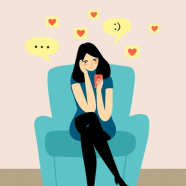 The Fear of Missing Out

There is no shortage of slang to be found on the internet. In recent years, a piece of slang in the form of an acronym has piqued my interest – FOMO. This acronym stands for “fear of missing out,” and is something I am certain most people can relate to. Despite its prolific use in the 2020s – particularly in the wake of the Covid-19 pandemic resulting in a historic low in social interaction for billions of people worldwide – this term has been around for nearly two decades. “FOMO” dates all the way back to the year 2004, when it was coined to describe the impact of social media’s genesis on our social networks1. Despite its early origins, the current definition of FOMO is unmistakably modern and evergreen in relevance. The Oxford Dictionary defines it as, “anxiety that an exciting or interesting event may currently be happening elsewhere, often aroused by posts seen on social media”2. The inclusion of the effect of social media posts in the definition underscores the impact that social networks have had on our lives and our psychology.

The Feeling of FOMO

A review delving into the history and societal impact of FOMO characterized it as a phenomenon of two processes. It begins with perception, an individual’s conscious realization that there is something they are missing out on, followed by a compensatory reaction which often takes the form of “compulsive behavior to maintain these social connections”1. Prior to researching FOMO for this article, I thought the phenomenon was simple and straightforward; if your friends plan a fun excursion and you are unable to join them, you may feel as if you are preemptively grieving the fun you will not be having. However, peer-reviewed studies and meta-analyses tend to focus on the experience of deriving negative perceptions of social standing as a result of excessive social media use. A compensatory reaction often follows the feeling of FOMO, which can manifest in the form of an increase in social media use3. This negative feedback cycle is difficult to break free from, which is likely part of why FOMO continues to be such a ubiquitous experience.

As it appears that social media plays a large role in both the root cause and the coping strategy of FOMO, researchers have begun to ponder the connection between FOMO and one’s psychological state and degree of social satisfaction. A well-established theory in psychology is Maslow’s Hierarchy of Needs (Figure 1)4. This model proposes five distinct categories of needs living beings require, with particular focus on human experience. An important tier of needs is classified under the umbrella of feelings of belonging, esteem, and love. Social media has significantly impacted the human experience of these psychological needs; rather than deriving all our social value from face-to-face interactions, much of our daily interaction with peers and strangers alike now takes place on our smartphones. When we feel as if our social needs are not being met, this can affect our mood, mental health, and contribute to feelings such as FOMO. It is worth noting that while many of our basic needs are necessities that we can rely on ourselves to accomplish, our psychological needs sometimes require other people – whether it be a partner, a community, or a friend – to fulfill. As an interconnected, digital society, social media’s role in our need for fulfillment makes a lot of sense.

Several studies over the past decade have focused on the social media platform that revolutionized the way we use the internet: Facebook. Whether you love it or hate it, odds are you have had an account at some point in your life. Personally, I recall experiencing a great deal of FOMO when my peers would discuss Facebook antics in the early years of high school before I had my own account. To be popular on Facebook seemed to be the pinnacle of social capital, that is, value achieved through the existence of a social structure5. This is not an uncommon experience, and thus it should come as no surprise that Facebook has been the focus of many surveys assessing FOMO.

With particular interest in how mood state could motivate the use of social media, a study led by Moira Burke in cooperation with two Facebook affiliates recruited participants directly from an advertisement on Facebook’s main timeline.  Participants filled out a detailed survey, with a particular focus on measures of social capital. Two subgenres were defined: ‘bridging social capital,’ defined as accessing new information through a broad array of contacts, and ‘bonding social capital,’ which focused more on emotional support from closer contacts. These surveys were designed to assess bonding, bridging, and loneliness (utilizing a scale known as the UCLA Loneliness scale)5. Ultimately, they found that directed interaction between a user and their friends – defined as making wall posts, “liking” and commenting, etc. – was associated with higher social bonding and lower loneliness scores. Interestingly, they revealed that users with greater levels of content consumption (non-directed monitoring of general content) fared worse overall; they exhibited higher loneliness scores as well as decreased social bonding and bridging. One might imagine that exchanging comments with an acquaintance about a recent party they attended would provide a more unifying experience than solely seeing photos and not engaging. In sum, those who prioritized directed interactions on social media tended to experience less loneliness and more social reward than those who simply observed their feed.

The results of this study are fascinating for several reasons, including a similarity to the model of negative feedback described earlier, where feelings of FOMO lead to increased social media use, which subsequently increases FOMO. Social media presents an opportunity to constantly immerse oneself in social interaction, on a sliding scale of intensity. Perhaps being privy to the daily lives of a larger social circle than ever before allows us to see exactly what we are missing – something each user will experience subjectively, leading to FOMO in some. It seems that social media, the platforms created to make us feel more connected, has created novel ways to feel lonely – something we will have to learn to cope with in the coming years.

While much of the research being done to better understand FOMO frames the experience as a negative outcome of modern society and connects it to excessive social media use, perhaps there is another way to examine things. An aspect of FOMO that makes it stand out is the focus on specifically losing time to bond and/or create memories with peers. Humans are innately social creatures, as are many other animals, right down to the humble lab mouse. While not much work has been done to understand how exactly the human brain functions during feelings of FOMO, researchers have begun trying to characterize behavior in social animals during analogous experiences.

A recent review, written by a UCSD Neuroscience graduate student, recently explored the concept of social homeostasis. General homeostasis is defined as the physiological means of maintaining stability in the body, including compensatory mechanisms the body can use to bring itself back to baseline after aberrations from a ‘set point’6. In a homeostatic system, a receptor will detect the deviation from baseline. Next, a control center – a neural system specializing in calculating changes from the norm – will process the divergence. Finally, an effector system will enact a process aimed to reestablish homeostasis (an example of physiological homeostasis is shivering to regulate body temperature – check out this recent NeuWrite article if this intrigues you). Social homeostasis, aptly, is “the ability of an individual to detect the quantity and quality of social contact, compare it to an established set-point in a command center, and adjust the effort expended to seek social contact through an effector system”7. This review proposed a model for changes in animals’ homeostatic set point resulting from chronic alterations in social interaction. To understand why a change in this set point may occur, they introduce the concept of social utility, which is essentially the relationship between the quality and quantity of social interactions. Figure 2 demonstrates scenarios in which an animal is either socially isolated or in an overcrowded environment. Each of these scenarios leads to a change in social utility. As the effector system is enacted, the animal will be driven respectively to increase or decrease prosocial behaviors in an attempt to maintain social homeostasis. In isolation, this will fail – leading to a compensatory adjustment of the homeostatic set point.

While it is clear that FOMO is widespread, common, and unpleasant, the question remains – what part of the brain is responsible for these feelings? A team led by Carlo Lai of Sapienza University of Rome aimed to explore this question in 2016. In brief, electroencephalography – a measure of brain activity commonly referred to as EEG – was performed while participants were shown stimuli associated with either social inclusion or exclusion. They compared neural data with the results of a self-assessment survey about FOMO. Ultimately, they found that those who placed higher value on social approval showed positively correlated levels of activation between the middle temporal gyrus, a region which acts as an information hub for the brain’s cortex and social inclusion stimuli8. They infer that this region plays a role in social processing, and even suggest an increased sensitivity among those who more easily experience FOMO to the positive social state and cues of others. Since people have different personal preferences and tolerances for social experiences, it is intriguing but perhaps not surprising that individual tendencies strongly influence one’s likelihood to experience FOMO and the activation of underlying related neural processes.

Interestingly, other regions of the brain typically associated with hunger have also recently been called to the attention of social neuroscientists. In 2020, a team led by Livia Tomova discovered that acute social isolation led to activation of a region typically associated with hunger cravings in the midbrain. In fact, when participants were either fasted or socially isolated, researchers observed similar MRI activity in the midbrain while presenting pictures of food or social situations, respectively. Indeed, participants relayed self-reported feelings of cravings in both scenarios9. These craving responses are akin to a desire to return to a comfortable level of social homeostasis, as previously discussed.

All in all, FOMO is not perfectly understood. While we may have inklings of why we feel the fear of missing out, there is still much work to be done to understand the phenomenon. If FOMO is negatively affecting your life, there are many strategies you can use to surmount negative feelings – beginning with thinking critically and understanding why these feelings exist. Clinical work has shown that focusing on and expressing gratitude for your social connections and pleasant day to day experiences has a positive impact on your mental health10, and turns the focus back towards oneself and away from what others are doing. We all need support from social connections in life. All we can do is make the best of the networks we build to provide for ourselves – and try not to let FOMO get in the way.

← Shiver me muscles: why do you shake when you’re cold? An Appetite for Epilepsy →