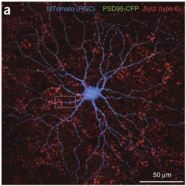 Vision is complex: Predicting responses despite non-linearity and heterogeneity

What does it mean to understand vision?  Can we know how the retina will react when we see our favorite painting or our best friend before it even happens?  The work of Dr. Fred Rieke hopes to do just that.  Not unsurprisingly, vision is complex and studying it is hard.  The output neurons of the retina, retinal ganglion cells (RGCs), integrate the incoming sensory information non-linearly and not every piece of incoming input carries the same value (heterogeneity).  These two characteristics make predicting the way the retina will behave to new images quite difficult.  However in their recent work, Dr. Rieke and his team at University of Washington have sought to overcome these challenges and develop a predictive model of how different spatial patterns produce their unique retinal output.

In their study of the retina, the Rieke team focused on one particular RGC, a large, contrast specific cell that they term the ‘On-Alpha-like RGC’.  In response to textured stimuli these cells did show the expected non-linear summation and heterogeneity that make the formation of predictive models difficult (Fig1).

Figure 1. On-Alpha-like RGCs respond non-linearly to different texture stimuli and showed responses to rotation of the stimuli, characteristic of heterogeneity

In order to develop a predictive model that successfully accounted for these two RGC characteristics, the group turned to looking at the anatomical input to their On-Alpha-like RGCs.  Through careful physiology, they were able to determine that the non-linearity and heterogeneity resulted from the excitatory input that the RGC received from the upstream bipolar cells.  Following this conclusion, Rieke and his team conducted some impressive quadruple labeling studies that allowed them to specify this incoming excitatory input almost exclusively to Type 6 Bipolar Cells (Fig 2).

To confirm that these Type 6 bipolar cells conferred the non-linearity seen in the On-Alpha-like RGC, Rieke’s group attempted to directly observe a non-linear summation of input.  By presenting two independent light spots, they were able to induce a RGC response from each spot.  In cases where these two spots were presented far away from each other (50µm), the RGC exhibited a normal integrated response summating the effect of each stimulus.  However when presented close together in space (20µm), the RGC response was greater than the sum of the two independent stimuli; the expected non-linear response (Fig 3).  In the case where stimuli were presented close together, the two light spots were presumed to both fall within the receptive field of a single Type 6 bipolar cell (a size consistent with the known receptive field size of Type 6 bipolar cells).  Yet when they were far apart, each spot would activate different bipolar cells, eliminating the non-linear response.  These findings helped to verify that indeed it is the Type 6 bipolar cells which confer the non-linearity to On-Alpha-like RGCs.

Based on these findings, Rieke and his team proceeded to construct a more accurate model of how On-Alpha-like RGCs respond to stimuli.  By focusing on the newly acquired information on Type 6 bipolar cell input, they hoped to develop a simpler, more anatomically based model based on the connections between bipolar cells and retinal ganglion cells.  They hoped that this simplified approach could account for the non-linearity and heterogeneity that had previously presented a stumbling block to predictive models.  Indeed, this focus on anatomical connections produced a model many orders of magnitude more accurate than other previous attempts bringing us closer to truly understanding the way the retina processes our complex visual world.

Join us on Tuesday April 16th, 2013 at 4pm in the CNCB large conference room to hear more from Dr. Fred Rieke about how his group has found simplified solutions to complex problems in predicting retinal responses.

Geoffrey Diehl is a first-year student in the UCSD Neuroscience program.  He is currently rotating in the Leutgeb lab.