Home » Neuroscience » Of Mice and Microscopes 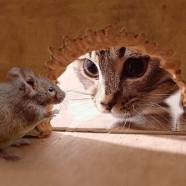 Of Mice and Microscopes

Posted by Ethan McBride on June 2, 2013 in Neuroscience | Leave a comment

The world is a complicated and dangerous place. In order to survive in an ever-changing environment, animals (including us humans) have to be able to appropriately change their behavior to suit their current situation. For example, if a mouse is scurrying around your basement searching for food and suddenly smells a cat, it will probably drastically alter its search strategy if not abandon it altogether.

The laboratory of Takaki Komiyama, this week’s seminar speaker, focuses on studying the activity of neuronal ensembles in behaving animals, and how it changes with experience and learning. In order to tackle this intriguing topic, the Komiyama lab utilizes in vivo two-photon calcium imaging of cells expressing a genetically-encoded calcium indicator (GCaMP3) to examine the activity of the same neuronal populations over a long time scale, even months (Figure 1). This and many other techniques enable the lab to investigate the neural correlates of how experience and learning affect behavior. 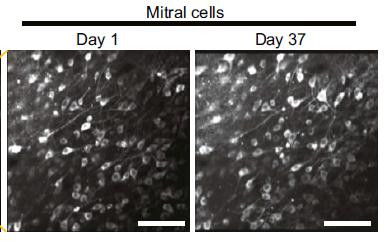 A recent paper from the Komiyama lab (Kato et al., 2012; video abstract) investigated sensory representations in the olfactory system of awake mice. Prior to this work most studies of neural activity in the olfactory bulb had been performed using anesthetized animals, and little was known about how this activity differed in awake animals. Kato et al. found that compared to anesthetized animals, odor-evoked mitral cell activity (major output neuron of the OB, see Figure 2) was more sparse, enabling representations of odors to be more distinguishable (Figure 3).

Using their long term in vivo two photon imaging technique, Kato et al. made the fascinating discovery that consistent experience with an odor causes its representation in the mitral cells to become more sparse (Figure 4).

This plasticity is persistent, but not permanent; over a period of months without exposure, the representation of the odor returns to baseline.

With this study the Komiyama lab demonstrated that anyone studying population coding in the olfactory system should really be using awake animals because odor representations in anesthetized animals are dramatically different. They also described an intriguing mechanism of long term plasticity in odor representation, which may be important for efficiently processing seasonal changes in odors. We sometimes forget this in beautiful San Diego, but in many other places in the world there are seasonal changes in climate that have a large effect on the types of odors present in the environment. This type of long term, yet reversible plasticity could be important for efficient encoding of odors over long periods of time, while continuously allowing new experiences to influence learning.

To hear more about this and more research from Takaki Komiyama himself, make your way to the CNCB Large Conference room on Tuesday, June 4th at 4:00pm for the final installment of the UCSD Neurosciences Graduate Program Seminar Series, aptly titled: Imaging neuronal ensembles in awake mice.

Ethan McBride is a first year student in the UCSD Neuroscience Graduate Program. He is currently rotating in the laboratory of Dr. Cory Miller.