This post has nothing to do with Free Willy, but I find him fascinating, so…  Click the image to learn about Keiko, the whale-actor who played Willy.   Also: as much as I love Bindi Irwin, I do not recommend Free Willy: Escape from Pirate’s Cove.. Sorry, Binds :

This is really about:

The role of interval timing dysfunction in the formation of first-rank symptoms in patients with schizophrenia?

Note 1: This is the first in a “series” of posts by the second- (or third-?) year students to tell you a little about our minor prop topics.   Some of us worked very hard on our proposals and learned a whole lot about these topics that, by definition, we will/may/should never actually study.  What a shame it would be if we never got to share our hard work with the world beyond our committees, right?  So here we are.  Please enjoy.

Note 2:  I do not apologize for my love of links. (BTW, if you only click three more links in this post, make sure they are all Kurt Schneider.)

The sense of agency—that is, the knowledge that you have consciously willed and executed your own actions—is believed to be inferred from the temporal relationship between our thoughts and actions.  For almost 20 years, Dr. Daniel Wegner, the epically-titled John Lindsley (?) Professor of Psychology in Memory of William James at Harvard University, has argued that our brains trick us into believing that our actions arise from our conscious commands to move, when in fact it is not our conscious command that drives the movement but an unconscious process that causes both the thought and the movement to occur separately1,2. The temporal contiguity between the thought and the movement incorrectly implies a causal relationship between the two. (See Figure 1)

Benjamin Libet provided support for this hypothesis by showing that there is a delay between the initial neural activity associated with subjects’ movements and their detection of their intent to cause the movement.

Libet’s experiment:
0 repose
1 (-500 ms) EEG measures Readiness potential
2 (-200 ms) Person notes the position of the dot when decides
3 (0 ms) Act
from Wikipedia
“Many philosophers and scientists have argued that free will is an illusion. Unlike all of them, Benjamin Libet found a way to test it.” – Susan J Blackmore

Additionally, Wilder Penfield induced movements with electrical stimulation of the motor cortex in epileptic patients, and the patients did not report consciously willing the actions.  Therefore, actions can occur independent of our willing them1. Further evidence of our “mental trick” lies in the ability of healthy subjects to be tricked into believing that they have caused an event to occur when they have not.  For example, transcranial magnetic stimulation (TMS) was applied to the motor cortex to influence movement of the left or right index finger of healthy subjects.  The subjects reported consciously willing the movement despite the external influence of the TMS4.

The Ouija Board Experiment
Image from: Wegner D, Wheatley T (1999) Apparent mental causation: Sources of the experience of will. American Psychologist.

Given these examples from healthy subjects, it is not difficult to imagine how rationalizations of abnormal events could lead to the experience that one’s actions are being controlled by an external source.

Indeed, an abnormal sense of agency is one of the more prominent symptoms of schizophrenia5. Patients lose the boundary between the self and others, causing them to believe that external forces control their thoughts and actions.  Although there are many types of delusions experienced by patients with other psychiatric illnesses, such as dementia, temporal lobe epilepsy, and Parkinson’s disease, auditory hallucinations, delusions of control, and other “loss-of-boundary” delusions are most commonly associated with schizophrenia.  Therefore, Kurt Schneider5 (not to be confused with Kurt Schneider or Kurt Schneider, aka Harry Earles) labeled these symptoms “first-rank symptoms” (FRS).  Despite years of research and several proposed mechanisms, the biological abnormalities leading to FRS remain unknown.

Salvador Dali’s “The Persistence of Memory”
(Click here for a timeline of his life… and click the image to buy the poster for me! You’re right, I’ve only inserted this painting because I needed an excuse to ask for the poster.  But melting clocks = distorted time, right?  Hallucinations?  Yes.  Good.)

Possible Mechanisms for the Formation of FRS

As you may have deduced by now, one popular hypothesis proposes that a timing deficit exhibited in schizophrenic patients may be associated with formation of FRS.  Patients with schizophrenia have reported subjective evidence of time distortion6, and several studies have reported timing deficits in schizophrenic patients, typically underproduction of time intervals during reproduction tasks and overestimation of time in verbal reports7.  Christine Carroll and colleagues8–10 have found that subjects with schizophrenia exhibit greater timing variability in the millisecond and several-second ranges in time perception and finger tapping tasks. 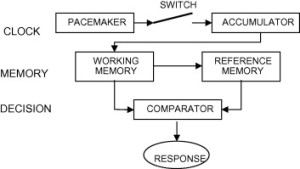 From Lou Beach at the New York Times

A more recent area of interest to both schizophrenia and time perception research is the insula (The mind and body are integrated in the insula, says UCSD’s Dr. Martin Paulus) .  The insula is a key neural structure involved in the awareness of internal state, or interoception*, which contributes to the sense of self16.  It has been proposed that it is the awareness of self, mediated by the anterior insula in particular, that provides a basis by which people can estimate time intervals17–19.  Evidence for this is provided by the fact that more salient internal events cause subjective dilation of time18.

At this point, I could list the various studies that have been done to test the link between these regions, interval timing, and FRS.  I could also tell you about my minor prop study.   I could, but I will not.  (Alas, I am running out of the energy and links necessary to continue… and I am sure your head is already spinning from all of this crazy information, and I don’t want you to feel overwhelmed).

If you are interested in learning more about this topic or would like to waste time clicking on more links unrelated to this post, send me an email (khiga@ucsd.edu), and I’ll see what I can do.

References: They do exist, but the formatting is frustrating me.  Send me an email, and I will send them your way!

Kerin Higa is a second-year Ph.D. student in the Consortium for Translational Research in Neuropsychopharmacology, working with Drs. Mark Geyer, Xianjin Zhou, and Jared Young of UCSD’s Department of Psychiatry.  She is investigating potential mechanisms for the development of psychiatric disorders, including schizophrenia and major depression, using a combination of mouse behavior and molecular biology.  She mostly just likes pipetting and playing with mice and is glad she can get a degree for it. @kkiritah

← Of Mice and Microscopes Do monkeys play fair? Staging an ultimatum game in the ultimate social primate →