I believe in a long, prolonged, derangement of the senses in order to obtain the unknown.

The illegality of cannabis is outrageous, an impediment to full utilization of a drug which helps produce the serenity and insight, sensitivity and fellowship so desperately needed in this increasingly mad and dangerous world.

Formally known as Cannabis sativa, marijuana is a plant that has been used since the third millennium B.C. for recreational, religious, and medicinal purposes. As the most commonly used illicit substance in the United States (now officially legal in Colorado and Washington), cannabis has become more than just a plant – it has also grown into a cultural phenomenon (SAMHSA, 2010). For musicians such as Bob Marley, artists like Pablo Picasso, innovators like Steve Jobs, and authors such as Oscar Wilde (and maybe even Shakespeare?!), marijuana is often used as a gateway to creativity. Over the years, marijuana has developed an anecdotal yet undeniable relationship with the art world. It is popular belief that marijuana can inspire creative thought, though how it does is an unanswered question. Tackling this question of how marijuana enables creativity at a neural level might ultimately give us a head start on promoting creative processes in other ways.

First, how do we quantify creativity?

There is not one accepted definition for creativity – in fact, creativity researchers spend most of their days debating what exactly creativity is and how you can measure it. However, there are a few ideas about what creativity might look like at the level of cognitive processes. According to the “Father of Creativity,” E. Paul Torrance, creativity is  “a successful step into the unknown, getting away from the main track, breaking out of the mold, being open to experience and permitting one thing to lead to another, recombining ideas or seeing new relationships among ideas” (Torrance, 1976). Although we often call people “creative,” it’s hard to explicitly say what creativity is. Many tasks measure participants’ abilities to fluidly associate distant ideas, or come up with unique solutions to a problem:

Through anecdotal evidence, it certainly seems as if cannabis can increase the capacity for divergent thinking. Many artists and musicians purport that when they use cannabis, they derive ideas and solutions that they would never have considered while sober. But how do you show that these musicians don’t have retrospective bias (“oh yeah, it was totally the weed that helped me write that song!”) and that it was actually the physiological effects of the marijuana aiding their creativity? We could wait and see whether Denver becomes the next Haight-Ashbury, or – in the interest of time – we could look at previous studies that got people high and recorded how they performed on a variety of tasks. 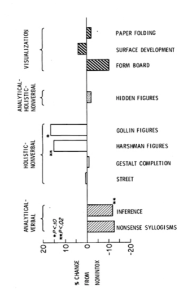 In the 1970s, you could probably do this type of study without even asking your human ethics board. A group of researchers took 25 guys, and tested them on a battery of psychological tests both while sober and intoxicated (Harshman et al., 1976).  Purporting that marijuana leads to a shift in cognitive functioning from verbal to nonverbal, they showed that people under the influence performed much better on “holistic-nonverbal” tasks (Figure 1). One of the tasks, shown below, asked participants to identify an incomplete line object, a method of measuring perceptual creativity. 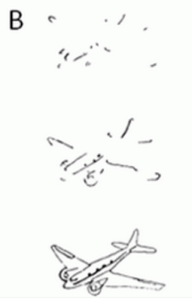 In a more recent study, participants smoked a joint and then completed a popular priming task, known as a lexical decision test (Meyer & Schvaneveldt, 1971). Participants were given one real word (i.e. pet) and then quickly a second word (i.e. dog) and had to say whether the second word was real or not. It is well supported that people are quicker to recognize the second word as real when the first word is related (Fischler, 1977). For instance, if the first word were chair, it would likely take you longer (on the order of milliseconds) to respond (unless of course you had recently seen this video). Intoxicated participants were quicker both on closely related words, as well as loosely related words (e.g., bone & dog), leading the researchers to conclude that cannabis led to “hyper-priming.” In other words, cannabis allowed participants to make fast jumps between distantly associated ideas; this might not be all creativity is, but it’s certainly a component of it. Participants also had scored high on a schizotopy scale while intoxicated, supported by the fact that like cannabis, schizophrenia is also marked by divergent thinking. [Of course, creativity and schizotypy also overlap, suggesting that marijuana may link to both of these ideas. If you’d like to learn more, check out our previous post on Reefer Madness.]

What’s going on in your brain during creativity?

Many cognitive researchers think of ideas in your brain as different “nodes” and use the term “broad semantic activation” to describe the process of jumping between these nodes to associate ideas. Although these are cognitive terms, without reference to the brain, we can postulate what this might mean as neural activity. We know that different types of things (particularly places, faces, and objects, as well as any memory or emotion tied to these) are encoded by different parts of your brain, so maybe during creativity these areas are efficiently and simultaneously activated. And in fact, this might be what is happening.

In a recent study, subjects were given a test very similar to the alternative uses task described above, and put into a functional imaging scanner (Takeuchi et al., 2012). Subjects that performed better on the task had stronger functional connectivity between their prefrontal cortex and posterior cingulate gyrus (an ambiguous brain area, but probably involved in memory and emotion). In another study, participants improvised lyrics (i.e. freestyle rapping) while in the scanner (Liu et al., 2012). The researchers found “widespread improvisation-related correlations between medial prefrontal, cingulate motor, perisylvian cortices and amygdala, suggesting the emergence of a network linking motivation, language, affect and movement.” This preliminary evidence – it’s a fairly new field of research – upholds the idea that disparate information hubs of the brain are communicating more when creativity is at work. With these studies in mind, it’s possible that marijuana is having the same effect (though to my knowledge, sadly there isn’t a study with high participants in the scanner). 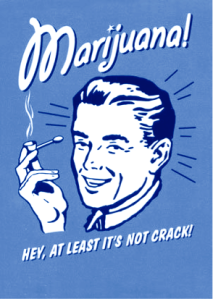 We can confidently say that marijuana increases some types of creativity, and we are continually learning about marijuana’s effects on the brain through a host of animal research. If we could model creativity in a rodent, we can probably get a finer idea of what more creative brain processes look like. It is likely related to quick, widespread activation of different nodes of information – possibly different cortical areas – as one works to find a solution or mix the next color for the palette, but this needs to be firmly tested. If we can get to the mechanistic bottom of this – what kind of cannabinoid receptor is necessary for creativity, what type of neural circuit (distant or local?), etc. – we may someday be able to design Marijuana 2.0: all of the creativity, less schizotopy (if those two things are indeed separable). In fact, one group has already figured out that pregnenolone, a precursor to steroids in your brain, reduces marijuana-inspired eating and dampens dopamine release in the reward system (Vallée et al., 2014). This kind of approach might leave the other cognitive effects of marijuana intact, but don’t tell Jack in the Box about the reduction in binge eating!

Substance Abuse and Mental Health Services Administration. (2010). “Results from the 2009 National Survey on Drug Use and Health: Volume I. Summary of National Findings.” Rockville, MD.