Home » Cognition » Hallucinating without drugs, the profundity of silence, and the thalamocortical circuit

Hallucinating without drugs, the profundity of silence, and the thalamocortical circuit

Posted by Matt Boisvert on March 6, 2014 in Cognition, Neuroscience | 2 Comments

I’m lying on my bed, with waves of pulsating light coming in and out, changing color, with shapes occasionally manifesting themselves, turning sometimes into people, sometimes into objects, and, more often than not, strange bunnymen, a la Donny Darko (albeit significantly less creepy). After ten minutes of this, I’ve had enough; taking the halved Ping-Pong balls off my eyes, everything returns to normal and I’m back looking at my messy desk and overflowing laundry basket. What just happened? Am I crazy? Was this some weird new drug? On the contrary, this was simply the ganzfeld effect in action, where “exposure to an unstructured, uniform stimulation field, elicits in most observers pseudo-hallucinatory percepts” (Wackermann et al 2008), after about 5 or so minutes. I had induced it by putting halves of ping-pong balls over my eyes and listening to white noise through headphones, and lying on my bed with a lamp on for 15 minutes (more specific instructions here, for those of you that want to try this at home). Generally, these hallucinations (more accurately, pseudo-hallucinations, as one is aware that these ‘hallucinations’ are not real) range from indistinct blobs and colors to full-on complex scenes, depending on the person.

Interestingly, this effect is highly reliable, inducing visual hallucination in 95% of people, with ~20% of those ‘highly affected’, with auditory, tactile and olfactory hallucinations in 10-25% of subjects, depending on the study (Pütz et al 2006). This phenomenon was first observed by Purkinje in 1819, where he reported light and dark spots occurring spontaneously “[w]hen gazing at a large field of almost blending luminance, e.g., at the sky uniformly covered by clouds, or watching a candle flame from a short distance” (Purkinje, 1819, pp. 67–68). This effect went unnamed and mostly unexplored for a century, until a couple physiologists termed it the ganzfeld effect, deriving from German words ‘ganz’ (whole) and ‘feld’ (field, area), as this effect requires a uniform visual stimulus over a whole field to work (Metzger 1930). Since its naming, there have been patents on devices intended to prompt the effect for (unproven) therapeutic purposes. However, most of the research has been focused on its usage in parapsychology (e.g., telepathy), with well over 40 studies to date, attempting to demonstrate that psychics can induce specific hallucinations in subjects undergoing the ganzfeld effect. No solid, demonstrable psychic effects have ever been shown (Hyman 1985).

The insanely complicated pathway of visual processing. From Felleman and Van Essen, 1991

That’s all well and good, but what about the more interesting question of why this happens: how can this uniform field of light prompt vivid hallucinations? To first explain how this effect might come to be, we must first know a little bit about visual circuitry, i.e., how visual information is processed by the brain on a basic level. This system is fiendishly complicated (see the infamous Van Essen diagram on the right), but what we need to know to explain the effect is that visual input comes in through the retina, is relayed through the thalamus, and is then further processed and interpreted in the visual cortex. Traditionally, the thalamus was just seen as a relay center, exciting relevant areas of the visual cortex, promoting a cascade of cortical neurons to fire, relaying and processing the relevant signal. However, more recent data has shown that the thalamus plays an important role in inhibiting the sensory cortex, preventing cortical neurons to fire by exciting inhibitory neurons in the cortex (Gabernet et al. 2006). After the thalamus promotes initial cortical excitation, there is a strong inhibitory signal that constrains the cortical flow of excitation both spatially and temporally. This inhibition comes on more slowly than the excitation, as there is another step (inhibitory cortical neurons) that the inhibition has to go through in order to prevent the cortex from firing. There are five times more connections from the thalamus to inhibitory interneurons in the cortex (that is, neurons within the cortex that inhibit other cortical neurons). In fact, when researchers stimulated neurons in the thalamus that connect to the cortex, they caused ~60% of inhibitory interneurons in the cortex to fire, but only <5% of excitatory neurons (Porter et al. 2001). This is a pattern seen in other sensory areas as well, not just the visual system, with one set of thalamic connections exciting the cortex during a stimulus, followed by a different set of connections causing inhibition through exciting inhibitory cortical neurons. The advantage of this delayed thalamic inhibition upon sensory stimulus is fairly intuitive: the cortex has time to process this stimulus, then inhibition allows the cortex to ignore the already-processed stimulus, focusing instead on new factors in the environment. 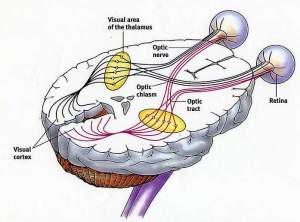 So what does this thalamus-cortex circuit have to do with the Ganzfeld effect? It’s fairly simple: when there’s no stimulus to prompt the thalamus to fire, in this case white noise and uniform visual stimulus, there is no inhibition on the visual cortex. In the absence of any sort of stimulus, there is still spontaneous firing in the cortex (Kenet et al 2003). This spontaneous activity is particularly seen in human sensorimotor cortex, where fMRI data taken in resting states can mimic responses evoked by experimentally administered tasks (as seen in Greicius et al 2003, Damoiseaux et al 2006, and Fox et al 2006), and these coherent responses in cortex are even seen in anesthetized monkeys (Vincent et al 2007). Without any sort of stimulus to elicit thalamic stimulation, and, consequently, cortical inhibition, the spontaneous firing has free reign, which eventually results in the coherent hallucinations you get when you are deprived of any sensory stimuli or have the uniform stimulus seen here.

Interestingly, a clinical case supports the hypothesis that the absence of thalamic inhibition can cause hallucination (Halligan et al 1994). Here, a patient reported a severe stroke that induced damages in some of the connections between the cortex and thalamus of her right hemisphere. This caused moderate left-sided neglect and visual field deficits, as one would expect from cutting off of thalamic connections, but strong visual, and some tactile, hallucinations were reported up until approximately one year after the stroke. She saw a range of things, from human figures and animals to aerial views. Based upon a wide range of criteria, the case study’s authors ruled out the possibility of psychosis and put forth the case that these hallucinations were caused by sensory deprivation to the right hemisphere (Halligan et al 1994). This effectively means that these hallucinations were the product of the uninhibited cortex of her right hemisphere, with her brain attempting to make sense of unfettered spontaneous firing of the cortex.

The profundity of silence

Recently, a friend and I were hanging out on a mountaintop in the middle of the desert at night, as a bit of escape from the pressures of graduate school. At some point, both of us stopped talking and just lay there in our sleeping bags, staring at the Milky Way, and, for a while, everything was absolutely silent. This silence seemed to be louder, more noticeable, than if there were ambient noise; there was a certain intensity there. Why is that, and what does this story have to do with the one I just told you about vivid visual hallucinations during sensory deprivation? I want to posit to you that this feeling of the profundity of silence rises from the lack of stimulus leading to a lack of thalamic stimulation and thus a lack of cortical inhibition. I don’t mean to imply that the cortex is entirely uninhibited, as other regions of the brain also provide inhibition, just that the absence of noise is itself a sort of cortical stimulus due to the absence of inhibition, lending a certain activeness to silence.

After a long period of this silence, I heard a loud pfffffffffft, followed by giggling–my friend had broken the silence by farting (oh, the friends I keep…). This practically made me jump out of my sleeping bag. Again, this has to do with the thalamocortical circuit. The sudden auditory stimulus (my friend’s fart) was much more striking to me because there were no other stimuli, and thus little cortical inhibition. The increase of salience of this stimuli, and thus the function of this circuit, makes sense evolutionarily. If you were on the savanna, trying to sleep, it would be to your benefit to be able to notice sudden noises, in case a lion was stalking you in the night. Similarly, this thalamocortical inhibition, discussed previously, makes sense in that it allows new stimuli to be assessed and dismissed or responded to as they come. Thus, both the hallucinations of the ganzfeld effect and the profundity of silence make sense in light of both neuronal circuitry and evolution.

← Buried Alive The value of values affirmation in education and beyond →