Home » Language » Synesthesia: The sky, the number 7, and sadness are all blue 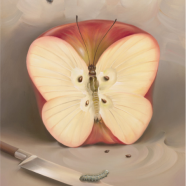 Synesthesia: The sky, the number 7, and sadness are all blue

If you were shown the shapes below and told that one is called a “kiki” and the other a “bouba,” which name would you attribute to which shape? Between 95 and 98% of people agree that the more rigid shape is “kiki,” and the curvy one is “bouba.” This is not because they learned these names in school (they’re made up), but because we’re predisposed to associate information from different modalities. As such, we pair the sharper “k” sound with the shape that has sharper points, and the rounder “b” sound with the rounder shape. 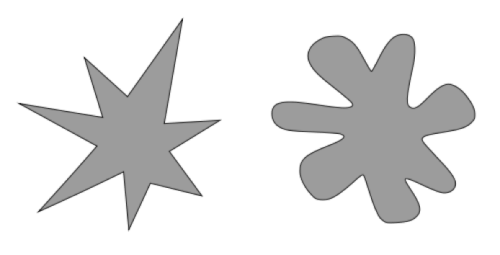 Although we all naturally integrate information from multiple senses to some extent, people with synesthesia do so to a much greater extent. Generally, when synesthetes perceive something through one modality, they have a simultaneous and involuntary perceptual experience in another. There are many different types of synesthesia, but one common form is grapheme-color synesthesia, in which people see letters or numbers as inherently colored. People with tone-color synesthesia, another common form, perceive certain colors when hearing specific musical pitches. Still another is number form synesthesia, which involves seeing numbers, days of the week, or months of the year in specific spatial locations. Someone with number form synesthesia might rely on a mental number line that looks something like this: 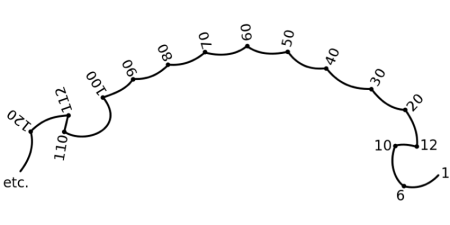 Synesthesia in the brain

Neuroimaging studies have revealed differences between synesthetes and control participants that are consistent with the perceptions that synesthetes report. For example, in a functional magnetic resonance imaging (fMRI) study, synesthetes who experience color when hearing certain words demonstrated increased blood flow in V4 and V8 (color-processing areas) while listening to words, while controls did not [1]. Later, the researchers trained the control subjects to associate words with colors, and had the participants imagine the colors in response to the words, but even under these conditions, the non-synesthetes did not exhibit the increased activity in V4 and V8 that the synesthetes did. This suggests that the perceptual experiences that synesthetes have can’t be fully simulated in controls solely by learning associations and imagining, but are instead more deeply ingrained, and potentially even innate.

Electroencephalography (EEG) data also suggest that synesthesia is a deeply ingrained perceptual phenomenon [2]. In a study by Brang, Edwards, Ramachandran, and Coulson, participants read sentences such as, “Looking very clear, the lake was the most beautiful hue of 7.” Synesthetes showed differences in a few event-related potential (ERP) components when the number was congruent with their grapheme-color mapping (i.e., in subjects who perceived 7 to be blue in everyday life), as compared to non-synesthete controls. The differences in activation that were found are associated with pattern recognition, perception, and meaning-integration processes. This is further evidence that the experience of color is naturally invoked in synesthetes when they encounter a number compared with non-synesthete controls.

There are currently two proposed explanations for the neural mechanisms underlying synesthesia. The first is that synesthetes experience increased activation between two parts of the brain specialized for different types of perception [3]. For example, grapheme-color synesthetes might have hyperconnectivity between the area of the brain that processes color (V4) and the area of the brain that processes numbers, both of which are located in the fusiform gyrus. One study that used diffusion tensor imaging (DTI) to compare the brain of a woman who experienced tastes when she heard musical intervals and colors when she heard musical tones revealed hyperconnectivity in the parts of her brain that process those stimuli independently [4].

Ramachandran and colleagues have distinguished two different types of synesthetes: “lower” synesthetes, who experience colors when they see the shape of particular graphemes, and “higher” synesthetes, whose color experiences seem to depend on activating the concept of a number, as opposed to simply seeing it [5]. Higher synesthetes, including people who have synesthetic connections between abstract concepts like months or days of the week and space, might experience hyperconnectivity between V4 and the angular gyrus, a structure known to be important for understanding the abstract properties of numbers.

Another potential neural explanation for synesthesia is that it results from a disinhibition of feedback [6]. Even in non-synesthetes, perceptual information is transmitted from primary sensory areas to association areas for processing, feedback is simultaneously sent in the reverse direction, from the association areas to the primary sensory areas. Normally, excitation and inhibition are balanced, but in synesthetes, excessive feedback might influence sensory perception, for example, causing the experience of a particular color when viewing a grapheme. The cross-activation and disinhibited feedback hypotheses are not mutually exclusive, and the differences between them are subtle: in the case of hyperconnectivity, there are extra connections between two brain areas, while in the case of disinhibition, there is a normal number of connections, but excitatory connections dominate inhibitory ones. Since synesthesia manifests in so many different forms, it’s likely that both of these hypotheses are true to different extents in each synesthete.

On a broad level, synesthesia can be viewed as making non-obvious connections between two aspects of the world. Often, one aspect is concrete (such as color), while the other is abstract (like a month or number concept). Similarly, many forms of art can be described in this same way, as connections between seemingly unrelated things in the world. 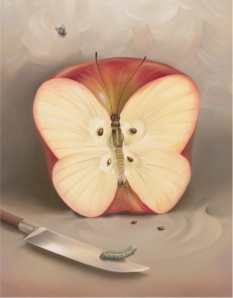 Metaphor similarly involves connecting two things from different domains. Although metaphoric connections are more widely understood and less apparently arbitrary than synesthetic associations, they are, more or less, the literary version of synesthesia [3]. It has been proposed that the gene that gives rise to synesthesia also gives rise to a propensity for generating and comprehending metaphors [7]. This view makes sense if we think about the popular metaphor “Juliet is the sun.” We have a finite and small number of traits that we primarily associate with the sun – things like warm, radiant, and bright. Then we have some weaker, secondary associations with the sun – things like beach and flowers, and this continues with still weaker third order associations, and so on. A metaphor is born when two things share an association, so if synesthetes naturally associate more aspects of the world, we might expect them to creatively connect these aspects in various art forms as well. Anecdotally, there are a number of famous creative synesthetes, including Van Gogh, Stevie Wonder, and Kanye West.

In fact, some researchers have found links between synesthesia and creative propensities. In a study of 192 synesthetes, Rich and colleagues found that synesthetes were more likely to be involved in artistic pursuits [8]. They also found a “striking consistency” between the colors reported to be associated with different graphemes across synesthetes, suggesting that, like metaphoric associations, synesthetic associations are not as arbitrary as they may seem. They found that the letter R was associated with red for 36% of participants, Y with yellow for 45% of participants and D with brown for 47% of participants (the first two seem especially non-arbitrary, and the third is just a very large proportion of people, considering all the possible colors that the letter D could be associated with).

Ward and colleagues also found that synesthetes were more likely to be engaged in artistic pursuits than controls [9]. They argued that this was not a result of a heightened propensity for creativity, but instead a result of the phenomenological experience of synesthesia. For example, individuals who see things when hearing music might have an enhanced motivation to pursue art compared to those who don’t have similar associations. This study also found that synesthetes had better performance on a Remote Association Test, a test used as a measure of a person’s abilities to associate words that are only remotely related. In this test, a person is given 3 words, such as blue, cottage, and cake, and has to come up with the word that relates to all of them (cheese).

There may be some extent of a synesthete in all of us [10]. The “kiki” and “bouba” distinction is one example, as we seem to intuitively associate certain sounds with sharp shapes. We also tend to associate lower pitches with darker colors and numbers with locations in space according to a number line that locates smaller numbers to the left of larger ones (in English-speakers, at least, suggesting that some of the multimodal associations we make can be learned). Synesthesia is still a relatively mysterious and extremely varied phenomenon, but a better understanding of synesthesia might help us to learn more about how all humans make associations between different aspects of the world – for example, why we call nice people “sweet” or refer to sadness as “feeling blue.”