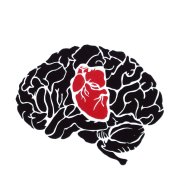 All couples look forward to Valentine’s night. Flying around the apartment, you quickly assemble everything needed for the romantic evening: nice outfit, box stuffed with chocolates, blood-red envelope holding your oh-so-romantic valentine card. The doorbell rings, and you smile broadly as you pull open the door… to find your beloved standing there, frowning and valentine-less. You can sense what’s coming, and before you can stop them, the words come… “Hey… We should talk.”

Just as everyone has felt the elation of love, we all have experienced the pain of heartbreak at some point. We have gone through the boxes of tissues, months of obsessing and wallowing, the many (attempted) chocolate and alcohol-related comforts. In the end, we get through it all intact, but a neuroscientist has to wonder what is happening to cause this emotional tailspin. I mean, if we can study falling in love scientifically (See “The Science of Falling in Love” on NeuWriteSD’s home page), the same can be done for falling out of it, right? So what is happening in your mind during your breakup, and why does it hurt so damn much?

The scientific study of heartbreak is extremely new, with nearly all articles on the matter appearing in the last 10-15 years. In fact, the notion that strong emotional stress can impact health was not widely accepted in academia until recently. In the 1990’s, Japan started accruing cases of a disease called “takotsubo cardiomyopathy,” where patients’ hearts would actually become damaged and their ventricles would be misshapen (into that of a “takotsubo,” or octopus-catching pot – a very bad shape for a heart chamber)[1]. Curiously, these cases were not heart attacks, but instead were a form of heart failure brought on by a rush of stress hormones. After 15 years, the syndrome was finally mentioned in a 2005 New England Journal of Medicine article[2], where it was renamed “Broken Heart Syndrome.” Among the causes of Broken Heart Syndrome are romantic rejection, divorce, or the death of a loved one, and the outcome can be as serious as death[3]. Yes, you can actually die of a broken heart.

Romantic rejection, a field that focuses specifically on dismissal by a love interest, is even younger than its heartbreak counterpart. Despite the study of love lost being in its first years, there are several labs around the country trying to attack this scientific question. You will see no animal work here (do mice fall in love…?), as these labs generally use fMRI scanning to look at human brain activity under relevant circumstances. Considering the novelty and limits of such studies, however, there are several fascinating findings regarding the neuroscience of heartbreak.

Your Love is My Drug

Helen Fisher, an anthropologist and leader in the field of love research, teamed up with several New York neuroscientists to see which brain areas were active when people looked at photos of their love interests. The Ventral Tegmental Area and the Caudate (areas involved with addiction, craving, and reward) lit up[4]. This will likely seem remarkable, and yet unsurprising, to anyone who has ever been obsessed over a lover. Several years later, Fisher and a new team of neuroscientists ran a similar experiment, except this time they studied people who had recently had their hearts broken (around two months post-relationship)[5]. In one of the cruelest-sounding experiments of all time, participants were put into a brain scanner and shown either neutral pictures of acquaintances or pictures of their ex, and (during the latter) were asked to reimagine the breakup (ouch). After many trials (double-ouch), the brain activity data was gathered and the results were startling: the brain’s reward system was lit up, as if in love, yet now the activity was STRONGER. The authors suggest that perhaps this is due to a “craving-like” stage, where the participants are still in love with and long for their partner. To further the notion that love is drug-like, the orbitofrontal cortex (OFC) became active during the task; this region is generally affiliated with inhibiting impulses and switching to more “goal-directed” behaviors, and so may be trying to quiet the overly-active VTA/caudate in a now love-less state. It would be interesting to see if this brain activity switches in later stages of a breakup  to something more akin to “withdrawal.” Fisher and colleagues do, however, present a solid case that love is one truly addictive substance.

As with any drug, love comes with one serious crash when it’s gone. But what if that pain you feel post breakup is not just emotional? Edward E. Smith of Columbia University (and colleagues) looked into this question in early 2011, using a direct comparison between “rejection-related” emotional pain and physical pain[6]. He took recently rejected people and had them (similarly to Fisher et. al) look at pictures of their rejecter while thinking of the emotional pain of the breakup. He then put a device on their arm that activated pain receptors in the skin as if a too-hot object was sitting on top of it. When comparing brain activity between the two conditions, Smith saw that the same areas (dorsal insula and S2) were active in both. Areas involved with processing physical pain sensation were showing activation while merely looking at an ex’s photo, evidence that heartache is experienced as an actual bodily hurt. Suddenly the crying and handicap of a broken heart doesn’t seem so odd; I mean, you would react pretty strongly to hot coffee spilled on your arm, right?

From this finding comes an interesting step in logic: if the brain reacts to heartache in the same way as it does a headache, shouldn’t both forms of pain be blocked using similar routes? There have, in fact, been several proposals of just this sort. Some suggest taking a pain killer should numb the emotional pain effectively, while others state that taking Tylenol during the breakup’s “onset” will prevent much of the later pain[7]. Though a tempting and hopeful hypothesis, however, no rigorous evidence exists to assert it. Also, even if it did work, it is unclear how much medicine you would have to take to “numb” the pain, and whether the effect would come simply from being less aware. Until there are more studies about medications for breakups, I think I’ll stick to my Ben and Jerry’s.

Given the possibility that heartache could be medically removed, should it? Is there a point to the pain of a breakup? A recent study focusing on the outcome of rejection suggests that there might be[8]. The O’Doherty lab of Caltech, which uses neuroimaging techniques to analyze reward-related learning and emotion, set up 40 participants on 60 speed dates and had them record their opinions of each “date” following the meeting. Participants recorded if they would want to date the other, if they thought they would be accepted by the other, and their “happiness” with the date. Several days later, participants viewed the answers and opinions of their dates while in an fMRI scanner. The catch? Scientists had designed the test to expose each subject to several instances of four scenarios: (1-expected acceptance, 2-unexpected acceptance, 3-expected rejection, 4-unexpected rejection).

In the two “unexpected outcome” conditions, the O’Doherty lab found that pSTS (posterior superior temporal sulcus) and VLPFC (ventrolateral prefrontal cortex) were more active. pSTS and VLPFC are both involved in re-evaluating situations and decision making, and pSTS is specifically involved with “updating” information about others (so, in understanding that people change). Also, ACC (anterior cingulate cortex, a region associated with evaluating negative outcomes) was active in both rejection conditions. Together, these findings indicate that violation of expectation combined with rejection (the essence of a breakup) will activate brain areas that function in decision-making and (possibly) learning. So, could heartbreak actually be linked to learning and updating information about the heartbreaker? Could the rejection lead to better decision-making in the future? Of course, the study referenced above is not enough to jump to such a conclusion, and the authors even caution against it. Yet, it is a spirit-lifting thought: that heartbreak is important, helpful, and a source of personal growth. After going through all the pain and tears for that certain addictive someone, you know better.

That is, until the next time you fall.

1) Y-Hassan, Shams (2014). Acute cardiac sympathetic disruption in the pathogenesis of the takotsubo syndrome: A systematic review of the literature to date. Cardiovascular Revascularization Medicine, 15-1:35-42

← The Neuroscience of the Spotless Mind From Gold Thongs to Opioid Receptors: The Placebo Effect →