Posted by Margot Wohl on May 5, 2016 in Environment, Evolution, Neuroscience, NeuWrite, Sensory Systems | Leave a comment

When I asked my boyfriend, a 15-year-old stuck in 28-year-old’s body, who would win in a battle between Batman and Superman in anticipation of the now-in-theaters “smash-flop” blockbuster, he responded, “Obviously Superman with his powers of x-ray vision and superhuman strength.  Batman is just a human with fancy technology.”  Such gadgets as a tape erasing electromagnet, retractable ice skates, computerized boomerang, and high powered projector seem very useful, but do not tap Batman’s namesake species for inspiration.  Indeed, most species of bat have their own form of superpower, echolocation, which they use to battle the dark forces of Mothra!  Or at least to eat moths (and plants/other insects).  Let’s explore the power and limitations of echolocation and how the brain can interpret the incident signals.  Maybe you and Batman can learn a thing or two.

What’s in a Sound?

Echolocation, also called biological SONAR, is the process by which a bat (and some deep sea mammals) emit a sound which is then reflected off the surface of all objects in the sound path and returns to the bat.  Given an internal representation of the speed of sound, a bat can use the time from sound emission to sound return, or echo, to calculate the distance to an object or many objects at once.  With this superpower, bats can navigate their environments in almost complete darkness, preying on creatures that have a better chance of escaping during the daytime.  Even more impressive is the detail that bats can glean from echoes including the size of an object, the velocity with which its prey is moving, and even the texture of a surface.

Many principles that we use for understanding the sounds of our environment are also used by bats.  For instance, changes in the reception of sound between two ears can be used to localize the azimuth, or horizontal position, of a source.  Also, the Doppler shift, which we experience whenever an ambulance drives past and we perceive a decrease in siren pitch, can be used by the bat to estimate the velocity and direction of insect flight.  However, bat perception of Doppler shifts is much more sensitive.  They can use the temporal pattern of small fluctuations of frequency made by flapping wings to distinguish between insects and a leaf blowing in the wind.

Going With the Flow: Adaptability of Calls

Perhaps when envisioning echolocation, you imagine the not-so-biological sonar used by submarines in the depths of the ocean sending out evenly spaced pulses of monotone sound that could drive a captain insane.  However, bat echolocation is much more fascinating because bats adaptively change their calls to maximize their ability to discriminate their surroundings.  For instance, as bats approach their prey, they upsample their environment by calling with a higher incidence. This provides a more detailed image of the prey and its trajectory.  Why can’t they always have this level of detail?  A bat has to wait for an echo from its previous call before it can make its next call to avoid interference of multiple calls and echoes.  When prey are far away, the sound takes longer to make its way back to the bat, lengthening the interval with which the bat can call.

Another form of adaptation can be best illustrated in a joke.

But seriously, how can a bat navigate when it is getting echos from all sorts of sources, especially echoes originating from calls of their own species which are likely to have similarities in call properties?  Bats in high traffic can modulate the frequency, duration and/or sweep rate of their calls to differentiate themselves from their brethren. 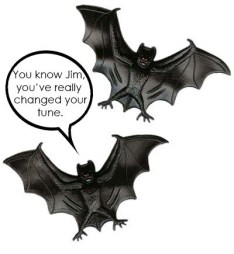 As with all superheroes, echolocating bats exhibit weak points that their nemeses, in this case insects, can exploit. One such strategy that moths use is dive bombing at such a speed that the incoming bat cannot detect the motion with its call sampling rate.  A second brilliant strategy is to distort the echo by generating interfering sounds.  One can imagine the change this will produce to the bat’s scene analysis by the analogy of blurring an object in the visual field.  The bats and moths engage in an evolutionary battle to see who can out manoeuvre the other.  A change of call structure, or sensitization to the differences between moth and bat sounds can give the bats an edge.  But the moths will fight back by making their interruptions harder to ignore.

A Journey Into the Bat Brain

The flying mammals that they are, bats share their basic brain structure with humans.  However, there are some specialized regions within bats’ auditory processing hubs that are ideal for echolocation.  For instance, an area of their auditory cortex detects the delay between the bat’s call and the incident echo.  This area does not respond to playback of a call and response that is not self-generated.  Also, the area of the brain that represents frequency contains an auditory fovea, or an area specially dedicated to a specific frequency range for echos they are most likely to receive.  The auditory information is then integrated with other sensory modalities to form a map of their environment.

In 2014, the Nobel prize for physiology and medicine Nobel prize was awarded to the Mosers and John O’Keefe “for their discoveries of cells that constitute a positioning system in the brain”.  These cells, dubbed “place cells”, are neurons that only fire when an individual passes through a specific region of their environment.  Bats have place cells that fire at a specific place within a cube suggesting that their brains encode a three dimensional map of space needed for the elevation changes experienced in flight-based navigation (see picture above).  Moreover, these cells are modulated by the timing of echolocation calls such that the places cells are very focused after the call and echo period, however their specificity dissipates as time passes.  This allows for remapping after each set of call-echos. 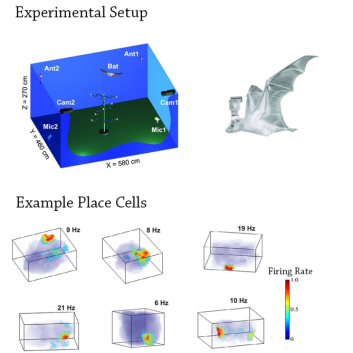 Given the specialized brains of bats, one might assume that humans do not have the ability to echolocate.  However,  some blind individuals have developed the ability to use clicks made with the tongue to “see” well enough to ride a bike.  And, another study found that seeing subjects could learn basic echolocation as well and that the echoes stimulated the visual.  Our abilities are fairly crude in comparison to some species of bats that can discriminate between distances smaller than a grain of salt.  Perhaps with many hours spent in the batcave, Batman could navigate the dark alleys of Gotham.  But with enemies that have the power of telekinesis, shapeshifting, mind reading, and riddle making, echolocation might not be the most effective.  Luckily, for bats, they live in a world without Bane, Two-Face, and Mr. Freeze.  A world in which they can rule the night by using sound to see.