Home » Forgetting » Forget About It 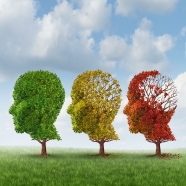 Posted by Barbara Spencer on June 9, 2016 in Forgetting, Memory, Neuroscience | Leave a comment

In the midst of studying for finals, forgetting is the enemy. You can easily remember the lyrics to your favorite 90s hit, but the names of the 12 cranial nerves elude you. We often think about forgetting as something pathological. We become frustrated by that all too familiar tip-of-your-tongue feeling and in extreme cases witness the devastating effects of Alzheimer’s disease and other dementias that rob individuals of their memories. But most of the time, forgetting is actually a good thing—in fact, it’s essential! Our brains are inundated with the minutiae of everyday life and we have countless experiences that we won’t remember days, weeks, or years later—nor would we want to. Forgetting allows us to ignore irrelevant information in order to properly encode and recall the important stuff.

To understand how we forget, it’s important to know how we remember. The ability to mentally travel back in time to a particular event depends on three main stages: encoding, consolidation, and retrieval. We can think of forgetting as being unable to retrieve a memory stored in the brain (it’s lost because we can’t find it, but it’s still there) or as simply never storing it in the first place. 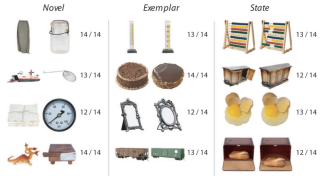 After viewing 2,500 pictures, subjects were able to recall which object they had seen before when presented with a pair of objects in which one was from a novel category (Novel) or similar to the original (Exemplar), and even when the exact same object was in a different state or pose (State). Image adapted from [1]

One of the reasons it’s so frustrating to forget is that our brain is capable of vividly remembering so many things. Research has shown that not only are people able to remember thousands of images, they can do so in great detail. In one experiment, subjects were shown 2,500 pictures of objects and were then able to recall which item they had seen before when presented with an object pair containing a new object from a novel category or a new but similar object. Remarkably, subjects were even able to accurately recall which object they had previously seen when compared to the exact same object in a different pose [1]. The problem with this is that subjects got to compare two photos—the old and the new—side by side. We don’t often have that luxury in real life. You aren’t presented with two lists when trying to remember what you need from the grocery store. The good news is that these memories may still be there even if think you’ve forgotten.

Sometimes we just don’t store certain information. Why? Consider the penny. Maybe you’ve felt especially lucky to find one heads up on the sidewalk. Perhaps you’ve lamented its existence, considering it costs more to produce one than it’s worth. Regardless, it’s safe to say you know what one looks like, right? Go ahead; pick the correct version out of this lineup. 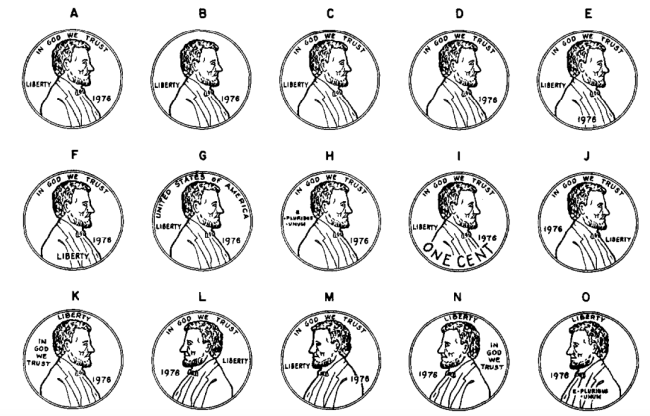 Which of these fifteen drawing of the top side of a penny is correct? Less than half of the subjects in the original study got this right [2]. (Answer at the end.)

You might be surprised at just how hard this is. In one of a series of experiments aimed at determining our ability to remember the visual features of common objects, Nickerson and Adams [2] found that the majority of subjects couldn’t recognize the correct version in a sea of counterfeits. Why? They argued that there is no functional reason to remember these details. After all, you really only need to know its color to recognize a penny in a handful of change.

Interestingly, the process of forgetting isn’t the same as failing to make a memory. By studying worms’ performance in a learning and memory task, researchers found that the msi-1 gene actively regulates forgetting [3]. This and evidence from other research [4, 5] suggests forgetting is not a passive process but rather that multiple pathways—each comprised of a series of actions among molecules inside of cells—are “actively inducing the decay of memories” [3]. The authors argue that forgetting is required to successfully adapt to a changing environment and, along with acquiring and storing information, is a product of the learning process. Further, investigating these molecular changes throughout the process of memory acquisition, consolidation, and forgetting may help us understand how they can get out of balance, which could provide insights into and potentially lead to druggable targets for memory disorders.

Even the act of remembering can cause forgetting. It may seem counterintuitive, but when we remember something it’s thought that an adaptive forgetting mechanism kicks in to curb any distraction—emerging from competing memories—that interferes with its retrieval. There is evidence that activity in the prefrontal cortex—known to be active during goal directed behavior—shushes the neural patterns underlying old, competing memories, which induces forgetting [6]. We’re all aware that it’s hard to focus when multiple things are competing for your attention—like when you’re trying to text while driving. (Seriously, stop doing this. If you think you’re good at multitasking, you probably aren’t.) In the same way, competing information can be disruptive when trying to remember something, which is why keeping distraction in check by turning down the volume on the noisy neurons representing that other stuff can be adaptive. 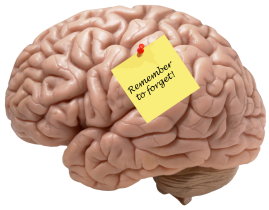 But can we intentionally forget? Unlike information stored on your computer, we can’t just move a memory into a mental trash bin. As mentioned in a previous review of the movie Eternal Sunshine of the Spotless Mind, the emotionally charged memories we might want to forget—like the pain that lingers after a breakup—seem to be especially strong. Targeted forgetting-on-demand would be particularly useful for those suffering from post-traumatic stress disorder. Recent research suggests that memories can actually be revised when they are recalled, during a process called reconsolidation. As was explained in more detail in a previous post, mice who have been trained to associate a tone with a shock can have this memory disrupted after it is learned. Similarly, it’s thought that drugs like the beta-blocker propranolol, typically used to treat cardiovascular conditions, might be able to reduce the emotional aspects of these traumatic memories and disrupt their reconsolidation [7]. A promising review of the literature on the topic suggests that administering propranolol following a trauma can decrease symptoms of post-traumatic stress disorder [8].

If you still aren’t convinced of the importance of forgetting, consider the mentally exhausting alternative of remembering everything. Jill Price, the first described case of hyperthymesia [9] or highly superior autobiographical memory (HSAM) describes her experience like this:

“Every day is like a bag of garbage. And then you go to sleep, and you wake up the next day. And it’s a fresh day. And you can throw that garbage bag out from the day before. I don’t have that. I got massive amounts of just piled up garbage bags everywhere.”

—This American Life’s “In Defense of Ignorance” episode, April 2016

This “nonstop, uncontrollable, and automatic” memory allows her to tell you that Easter Sunday fell on April 16 in 1995 and that it was a rainy day, but the inordinate amount of time she spends recalling the past interferes with her ability to live in the present [9]. Researchers believe there may be a link between HSAM and obsessive-compulsive disorder such that people with HSAM strengthen their memories through an obsessive, habitual rehearsal of their past experiences [10] and point to evidence of similarities in structural brain changes in both populations compared to normal controls [11]. While Jill says she isn’t jealous of those of us who are able to forget, cases like hers allow us to reconsider the necessity of forgetting in healthy memory, and leave me itching to take out the trash.

*The correct penny is A

← Your Brain on Thirsty Thursday Why Do You #SciComm? →