Every time someone asks me how I became interested in science, my memory takes me back to the early 90s. I was six or seven, and instead of being amused by princesses and unicorns (I have nothing against them though), I was a huge fan of any movie/series that featured weird creatures, like V (does anyone actually remember the original series?) or Aliens, the SciFi horror movie that celebrates its 30th anniversary this year. I thought the life cycle of the Alien was fascinating and I spent a considerable amount of time doodling diagrams to understand where the face huggers or the little fella bursting out from the chest of the crew’s duffer fit into that cycle.

Soon enough I realized that unfortunately, aliens do not exist (as far as we know), but I learned that I did not need to go to space to find equally fascinating (and deadly) creatures. And through science, I could actually study them. That may explain why I originally started working in a microbiology lab.

However, here I am not talking about big and drooling creatures like Aliens, but teeny tiny organisms that can really mess up our health. These organisms have proven to be selfish, and cause no good to whoever gives them shelter, and some of them show a remarkable taste for our nervous system. They are parasites.

There is a long list of parasites that can potentially camp out in our brain and/or spinal cord, causing considerable damage if untreated. In this post only a few are featured, those that cause what the CDC (Centers for Disease Control) considers to be responsible for “Neglected Parasite Infections” in the US and which have known effects on the human nervous system.

T. gondii, the intracellular parasite responsible for toxoplasmosis is my personal favorite. This parasite is capable of manipulating the host’s behavior. For instance, rats are normally repelled by cat urine as a biological mechanism of defense; however, rats infected by T. gondii seem to turn suicidal, and are actually attracted by the cat urine scent. This makes the infected rats wander into a cat’s territory, putting themselves at risk of being devoured by their predator [2]. This manipulation of the behavior of the rat, an intermediate host, is a strategy by T. gondii in order to get to its definitive host, the cat.

But how is T. gondii capable of this sort of manipulation? Apparently, this microscopic parasite produces a protein that synthesizes the precursor of dopamine, thereby, increasing the levels of this neurotransmitter in the brain [3] impairing normal circuits that would keep the rat away from cats (check previous posts about dopamine’s role in behavior: here, here, here and here).

T. gondii not only affects cats and rats, but also humans who eat anything contaminated with the eggs of T. gondii. However, it does not represent a threat for people with healthy immune systems. After entering the host’s body (acute phase of the infection), the parasite is rapidly eradicated by the immune response. If the parasite reaches the central nervous system before it can be destroyed, it forms cysts in neurons. If the host is immunosuppressed (e.g. suffers from AIDS or going under chemotherapy), the immune system is incapable of destroying the parasite and the rupture of the cyst will cause reactivation of the infection and subsequent tissue damage. It can cause microcephaly, collapse of the brain due to leakage of cerebrospinal fluid, cortical atrophy (dysfunction of the outer layer of the brain), and amorphous calcification (deposits of calcium in the brain, forming “brain stones”) [1].

T. gondii not only affects cats and rats, but also humans who eat anything contaminated with the eggs of T. gondii. However, it does not represent a threat for people with healthy immune systems. After entering the host’s body (acute phase of the infection), the parasite is rapidly eradicated by the immune response. If the parasite reaches the central nervous system before it can be destroyed, it forms cysts in neurons. If the host is immunosuppressed (e.g. suffers from AIDS or going under chemotherapy), the immune system is incapable of destroying the parasite and the rupture of the cyst will cause reactivation of the infection and subsequent tissue damage. It can cause microcephaly, collapse of the brain due to leakage of cerebrospinal fluid, cortical atrophy (dysfunction of the outer layer of the brain), and amorphous calcification (deposits of calcium in the brain, forming “brain stones”) [1].

Most cases are asymptomatic, but sometimes there are consequences in the host’s behavior. There are indications that infected individuals are at risk of suicide and perform worse in some verbal learning and memory tasks [4]. It has also been observed some effects like those in the rats (e.g. attraction by domestic cat urine odor). But more relevant than a weird attraction for cat’s smelly urine, infection by T. gondii may trigger some psychiatric disorders, such as schizophrenia. The connection between schizophrenia and T. gondii infection, although not very clear, relies on the analysis of some cases where schizophrenic patients showed a higher incidence of T. gondii infection and the fact that antipsychotic drugs used in schizophrenic patients seem to stop the life cycle of the parasite [5]. However, more research is needed in order to support these initial observations as there are some discrepancies about whether T. gondii actually contributes to the development of schizophrenia.

Adult T. solium. The adult worm is found in the small intestine of infected humans.

T. solium is commonly known as pork tapeworm, which does not mean that eating pork will give you tapeworms. Humans get infected by eating food, drinking water or consuming anything that is contaminated with tapeworm eggs. Someone who already has the infection can keep infecting him/herself if hygienic conditions are poor (this is called autoinfection). 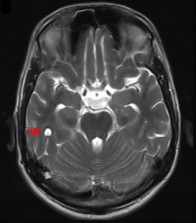 This worm is an intestinal parasite; it hooks and feeds on all the nutrients that the host can provide. Have you ever heard about the myth involving Maria Callas and this tapeworm as her weight-loss strategy? Nearly a year ago, we heard on the news about a man who had a ‘wiggling’ tapeworm removed from his brain, causing him the typical symptoms.  Apparently, he was lucky enough to go in time to the doctor, who discovered the larvae of T. solium in a brain scanner.

The larvae can travel and live in muscle tissue, in the eye, in the brain or in the spinal cord. They form cysts and that is why the infection is called cysticercosis (or neurocysticercosis when the infection is in the nervous system). Cysts in your brain can cause confusion, lack of attention, headaches, seizures, and even epilepsy. If it goes unnoticed, it can eventually kill you. Other symptoms involve visual hallucinations and asomatognosia (lack of self-body recognition: “Is that my hand that is moving?!”), but they are very uncommon [7]. These symptoms depend on the brain region that has been damaged by the presence of the cysts.

Trypanosoma cruzi – the dirty one

T. cruzi is responsible for Chagas disease, a.k.a American tripanosomiasis. This parasite is transmitted by insects, in particular Triatominae, the “kissing bug” (what a beautiful name for such a moron). Triatominae carrying the parasite will transmit it into your bloodstream through its bites.

Triatominae or the kissing bug.

T. cruzi thrives in unclean environments, but it is not the sole reason for the transmission of this parasite. Congenital infections (at the time of birth) and contaminated transfusions and transplants represent an important threat.

Right after the parasite enters the bloodstream, the acute phase is triggered. Normally, the parasite lays low in the organism, causing no symptoms, but in a few cases it might affect the heart and/or brain.

In a nearly 30% of the patients, the parasite will reactivate and cause severe damage. Brain swelling, congestion and micro-bleedings are some of the issues that may develop in the nervous system. It also causes encephalitis (inflammation of the brain) due to the accumulation of microglia, astrocytes and macrophages (all specialized cells in the brain) [1]. Usually the parasite finds nesting inside these cells in its amastigote form, which is the biological structure adopted in order to live inside its host’s cells. Most commonly, immunosuppressed patients may experience a reactivation of the latent parasite.

T. canis and T. catis are helminth parasites (roundworms) that may be present in the feces of your favorite pets, dogs and cats respectively. Humans can develop toxocariasis when contaminated products by this infected feces are ingested (you’d be surprised how easy it is to inadvertently eat your dog’s poop). The most common victims of toxocariasis are children, for obvious reasons (kids, wash your hands!).

T. canis during hatching (left and middle) and as a larva (right).

Eggs containing the larvae hatch inside the human body and travel in the bloodstream to their favorite locations: brain, lungs, liver, heart, muscle and eyes. Most people do not develop any symptoms, but the most common ones are fever, coughing, inflammation and eye issues. When the larva reaches the eye (typically, it only occurs in one eye) it causes inflammation and scarring of the retina, leading to blindness, which is probably one of the most upsetting complications of this parasitic infection. Toxocariasis can also affect the central nervous system. Although it is uncommon, manifestations include epilepsy, seizures or psychiatric disorders. There are also some reports on disseminated encephalomyelitis, an inflammation attack to the brain and spinal cord which leads to the demyelination of neurons (loss of their protective sheath) [1]. It is often mistaken for multiple sclerosis, hindering proper diagnosis.

In short, all these parasitic infections are treatable if detected in a timely manner. They will definitely not burst your head in an Alien fashion, and although they are teeny tiny creatures, they can do some damage if ignored. Parasites are fascinating creatures, and they can be as scary as the big interstellar Aliens. If I had known when I was a child I would have probably spent more time thinking about washing my hands, kissing bugs and pets’ poop instead of studying the life cycle of the fictional monster.

After all, it seems like the Alien creators were somehow inspired by the astounding world of parasites. You can google it and find out for yourself, in case you didn’t get enough of horrifying creatures in this post.

← To See, but not to See Pop Culture Psychology: What Your Favorite Superhero Can Say About You →