Home » Cognition » How I Spent My Summer Vacation 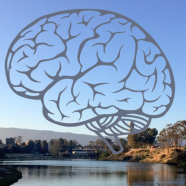 How I Spent My Summer Vacation

What’s one part beach, four parts science, and too much fun? If you answered “Brain Camp,” you nailed it. Or as long-time course co-director Michael Gazzaniga described Brain Camp: “Lectures in the morning, practicums in the afternoon, and parties at night!”

Formally speaking, “Brain Camp” is now called the Kavli Summer Institute in Cognitive Neuroscience. Each summer since 1988, a group of about 70 young scientists (graduate students, post-docs, and junior faculty) have gathered to discuss current topics in cognitive neuroscience—and perhaps even to pave the way for new directions. This year, I was drawn to apply for a fellowship due to the topics, both of which begin with the phrase, “Computational Perspectives…”. The first week focused on language prediction in the brain, a topic relevant to my own dissertation research on how individual differences in knowledge relate to real-time language processing. The second week was farther afield for me—computational perspectives on the brain in psychiatric and neurological disorders. But rather than seeing this as a negative, most of the brain campers seemed to agree that one of the two-week summer school’s greatest strengths was placing students face-to-face with lots of their peers, many of whom came from different research backgrounds, and providing the resources and backdrop for folks from different walks of science to talk (often over beers). Fellows traveled to attend the workshop in sunny Santa Barbara from all over the world, with about a third of fellows traveling internationally to attend.

The two weeks of intense lectures were accompanied by several labs and hands-on experiences, including an extremely hands-on dive into the brain. Several scientists and clinicians from across the country led a human brain dissection on the first day of the program. Our instructor was able to show us the reason why striate cortex (aka primary visual cortex) is so called—a strip of myelinated axons appearing as a line of white was visible in the human brain we were inspecting. Other labs included hands-on analysis of data collected using several popular methods in cognitive neuroscience. And one lucky group was able to participate in a real-time demo of TMS—transcranial magnetic stimulation. Applying brief, rapid electric pulses to target areas of the brain can selectively (and temporarily) impair functions they are associated with—for example, applying TMS to parts of the motor strip impairs moving certain parts of the body.

As for the lectures, during the first week, course directors Gina Kuperberg and Florian Jaeger put together a stellar list of top researchers in the field of language processing. As Kuperberg put it, simply: “Language is amazing!” It’s extremely fast and adaptable—we switch topics faster and more flexibly than we may realize (and at Brain Camp, we certainly did). Kuperberg comes from a background in psychiatry and cognitive neuroscience—she uses methods from cognitive neuroscience to ask questions about when, where, and how the brain processes language. Jaeger comes from a background based in computation and linguistics. The two have recently co-authored a position paper exploring how studies in the cognitive neuroscience of language can benefit from computational approaches. Over the course of the week, several researchers gave talks from both perspectives (computation and the brain), all with the shared goal of understanding more about how the brain predicts upcoming information. Bottom-up input at multiple levels of representation may combine with top-down predictive mechanisms (from high-level events down to individual speech sounds). Bringing together cognitive neuroscience and computational approaches to a single set of questions (how does the brain predict language and meaning?) allowed for flavorful discussions, and having multiple leaders of the field in the same room at once (for a week!) allowed the discussions to linger on the spots where people might (even if subtly) disagree.

Week 2 focused on computational perspectives on psychiatric and neurological disorders. Course directors Ray Dolan and Robb Rutledge put together a rigorous and fascinating week of talks that talked about decision making and learning, more generally, as well as how it might go awry in disorders. Yael Niv spoke about attention and learning—and how mental disorders seem to sit at the interface between different systems in the brain, such as these. A talk by Laurence Hunt considered how people go about gathering information when making decisions—computationally examining the finding that (against rationality), people tend to choose to learn more about items they already know a lot about. One theme running throughout all of these talks was how different systems involved in prediction and learning might work or go wrong. As someone who studies language, hearing many perspectives on broad computational approaches like reinforcement learning and Bayesian inference was useful. These approaches have me thinking about how learning happens in day-to-day language use, as we update our internal models of speakers, of language itself, and of the world.

Discussion-based seminars focused on current issues of open access and replicability in science, and later (relatedly) on ethics in conducting scientific experiments. There were many issues discussed—though no clear solutions emerged. Recently, more and more researchers in the cognitive sciences are pre-registering experiments online—meaning they’ll post the research question as well as how they plan to collect and analyze data. The idea is that by pre-registering analysis approaches, researchers might avoid certain statistical pitfalls that come with acquiring large datasets (if you poke around in a haystack long enough, you might just find a needle—or in this case, a “statistically significant” result). But one problem is that there is no surefire way to tell whether pre-registering is actually “pre-”—that is, that registration is done prior to collecting any data. Another issue is that as cognitive neuroscience advances, statistical techniques may also advance more rapidly than some researchers are comfortable with. One of the more stats-savvy course instructors advised researchers that using methods they understand is a lot safer that dabbling in methods they don’t—even if they are newer and shinier. Relatedly, during the discussion of ethics in science, course instructors encouraged being as comprehensive as possible when writing up methods and results. It’s always possible that researchers make mistakes, but being transparent about exactly what you did and why may help scientists (and reviewers) catch such mistakes sooner rather than later. This leads to a broader theme that was pervasive through many of our discussions—scientists can do a better job of communicating with each other, and with the public, about the scientific process, and this can benefit everyone.

The more I reflect on the two jam-packed weeks of lectures, lunchtime chats, and evening-time socializing, the more I gain from the experience. Our cohort is already looking ahead to the next time we’ll meet up at a conference—and I am grateful for the chance to have met so many smart young researchers who are going to define parts of the field of cognitive neuroscience.

If you’re interested in applying to attend next summer’s workshop, keep an eye on the Kavli Summer Institute in Cognitive Neuroscience home page.
The Kavli Summer Institute in Cognitive Neuroscience is jointly funded by the National Institute of Health (NIMH and NIDA) as well as the private Kavli Foundation. The Kavli Foundation is based in California and has institutes at many universities, both in the US and internationally—including an institute at UC San Diego. At the heart of their mission is supporting science, including providing direct support for scientists and also increasing an understanding of science among the public.

← A nerve-racking issue Genomes, Circuits, and the Roundworm: C. Elegans as a Model Organism →