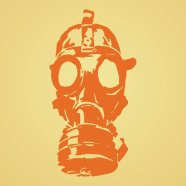 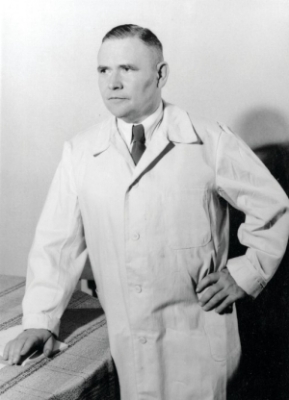 In 1936, a scientist named Gerhard Schrader was hired by the German government to end a bothersome and destructive beetle pest that was devastating German farms. Mixing different molecules (because that’s what we scientists do) he came across the recipe for the deadly nerve agent tabun. Even though his purpose was to create a strong, cheap pesticide that would target bugs – not humans – he created one of the world’s most deadly chemical weapons. History tells us that he discovered tabun by accident, but as it turns out, a couple years later, in 1938, he produced a gas 10 times stronger, called sarin. Soman and cyclosarin were also synthesized by Schrader’s team in 1944 and 1949, respectively. It seems to me that he was terrible at finding insecticides and pesticides that wouldn’t also accidentally kill people in a horrible and painful way. It just sounds suspiciously convenient that he and his team unintentionally created at least three deadly compounds in times of war (WWII 1939 – 1945). Oddly enough, none of the chemicals manufactured by Schrader were used during WWII, despite the fact that the German military showed interest in sarin. If the goal was to wipe out a good portion of the population, sarin would have done the job more efficiently than mustard gas, the one that was available at the time. Mustard gas poisoning takes longer to kill the victim: symptoms may not appear until 24 hours after exposure, and death may not occur until days or even weeks after intense exposure. Sarin, on the contrary, kills the victim within minutes.  However, it is not clear why the German military decided not to use sarin in battle during WWII.

Sarin, tabun, soman and cyclosarin are nerve agents. They belong to the so-called class G, as they were synthesized by a German team of scientists. Class V nerve agents (V stands for venomous, victory or viscous) were developed later and they have similar properties to those of class G, but they are more stable (less volatile), thus harder to wash out. The best known class V gas is VX, and it is thought to be the most toxic of all nerve agents. Its LD50 (the dose of the chemical that would kill 50% of the population exposed) is much smaller than that of other nerve agents, meaning that a smaller amount of VX will cause the same number of casualties as a larger amount of sarin, for example. All these nerve agents, class G and V, might have initially been conceived to act as mere pesticides and insecticides, but their ultimate use has been as chemical weapons.

Nerve agents are organophosphates, gases with a high level of toxicity that can be deadly when inhaled, ingested, or in contact with skin. Nerve agents are known to cause damage in the central nervous system (CNS), hence their name. They cause cholinergic syndrome after acute intense exposure. This syndrome is characterized by inactivation of the enzyme acetylcholinesterase, responsible for breaking down the neurotransmitter acetylcholine (ACh). The central nervous system (CNS) accumulates more ACh than it can handle. An overload of ACh will cause shortness of breath, sweating, vomiting, diarrhea, decreased heart rate and death, often due to  respiratory failure. Sarin poisoning is treated with the antidotes atropine and/or pralidoxime. Atropine is a compound that blocks the ACh receptors, so even though there is still an excess of ACh in the CNS, it can’t bind to its receptors and the negative effects won’t be triggered. On the other hand, pralidoxime binds to the enzyme that is inactivated by the organophosphate, dislodging the poisonous compound and rendering the enzyme active again.

Unfortunately, biological and chemical war is not exclusive to sci-fi horror films. It’s very real. There’s record of sarin being used as a chemical weapon a few times in recent years. In 1994, members of the religious cult Aum Shinrikyo modified a car to release sarin gas while driving near the location of officials who were working in a case against them in Nagano, Japan. Seven people died from this attack, and 150 were affected. If you are old enough, you may remember that less than a year later the same cult decided to release sarin gas once again in the Tokyo subway during rush hour. This time they got worldwide attention, and this horrible event became the most infamous sarin attack. Twelve people died and over 5,000 were hospitalized. Many of the survivors didn’t fully recover and were left with permanent damage. Some reports explain that the perpetrators escaped after releasing the gas and taking the antidote to avoid any damage to themselves. How could no one notice  men releasing a deadly gas in such an enclosed environment like a subway station? Well, sarin is colorless, scentless and tasteless.

But don’t be fooled, sarin is not part of the past. In 2013 there was suspicion of sarin gas attacks in Damascus, Syria, leaving more than 1,400 dead according to some reports. Again, last April a new, presumably sarin gas attack took place in Khan Sheikhoun, Syria, where more than 80 people died.

All nerve agents are included in Schedule 1 of the Chemical Weapons Convention: their only use is for chemical warfare. Was Schrader really looking for pesticides and the military took advantage of his deadly discovery? Or was Schrader the one taking advantage of times of war to find a niche for his research? If Schrader did not inform the government about his accidental discovery, maybe thousands of lives would have been spared. Are scientists responsible to inform the authorities when they come across discoveries that may be used for inhumane purposes? What’s more, can scientists foresee the misuse of their research, especially those for warfare? There are many questions and concerns when it comes to this issue, thus governments and the World Health Organization (WHO) are making efforts to regulate such “research of concern”. In the meantime, try not to create weapons of mass destruction in the lab.

War of Nerves: Chemical Warfare from World War I to al-Qaeda by Jonathan Tucker.

← Feelin’ the Beat (Frequency) How I Spent My Summer Vacation →