One of the greatest pleasures in life is to scratch an itch – in both the real and figurative sense. Although scratching an itch provides immediate (albeit temporary) relief, it may actually trigger the mechanism that makes us itch. So the more we scratch, the itchier we get, turning the short-lived pleasure into a lasting nightmare.

There is a long list of different causes that can trigger an itch: dry skin, parasitic infections like scabies or lice, pregnancy, allergies, or diseases such as liver disease, diabetes, or even cancer. The itch-scratch cycle is considered a beneficial neurophysiological reflex to keep potential damaging stimuli (chemicals, pathogens, parasites) away. But something as apparently simple as scratching, if persistent, can become a problem, causing skin damage, and creating an opportunity for other infections.

Every once in a while, everyone experiences itching. The itch usually lasts for a short period of time, and most cases are relieved by easy treatments with over-the-counter anti-itch products [1]. However, the itch may become persistent in some cases and turn into a chronic condition. Diagnosis and treatment for chronic itch is tricky, and at the moment the available drugs have not been very efficient.

Itch can be classified as pruriceptive, neuropathic, neurogenic or psychogenic [2].

Although this classification may help to identify the itch, the division between them is not that clear, and a certain type of itch can be related to another, or cause a secondary itch (e.g. neurogenic itch can cause secondary conditions like dry skin which will result in pruriceptive itch) [2]. There is no clear consensus on whether there is a unique neuronal circuit for all different types of itch, or each kind of itch triggers a different neuronal circuit. Researchers are certainly itching to unravel this mystery.

So, what is science doing?

In PET and fMRI studies that allow researchers to visualize active regions of the brain, it was found that the main areas involved in itch were those implicated in sensation (somatosensory areas S1 and S2), pleasure (anterior and posterior cingulate cortex), and decision-making (dorsolateral prefrontal cortex) [3]. These studies also revealed that motor areas of the brain related to the action of scratching were activated when the itchy feeling was evoked, even when scratching was not allowed [3]. 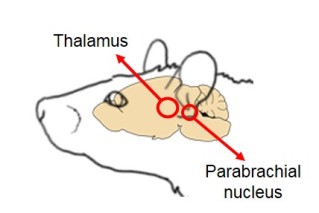 Mouse brain regions involved in itch-scratch cycles, according to the new study in Science [4].

So far, neuroscientists identified the spinothalamic pathway (spinal cord and thalamus) as one important player in itch processing. But more recently, the spinoparabrachial pathway (including spinal cord and parabrachial brain region) has also been pinpointed in the processing of itch sensations. A group of researchers from China have recently published in Science about one of the possible itch-scratch cycle mechanisms regulated by the spinoparabrachial pathway [4]. They saw that neurons activated by the pruritic (itchy) stimulus were projecting from the spinal cord and expressed a special type of receptors called GRPR (gastrin-releasing peptide receptors). The GRPR-expressing neurons increased their activity in response to pruritic agents like histamine and chloroquine. More interestingly, when they allowed mice to scratch freely in response to the itch, they saw that the number of active neurons in the parabrachial nucleus increased in response to the scratching, explaining the vicious cycle: the more you scratch, the more you itch. Using optogenetics, they could activate GRPR-containing neurons at will, and they saw that activation of the GRPR-containing neurons was always correlated with an increase in activity in the parabrachial nucleus. Using a DREADD, they were able to inhibit the parabrachial nucleus activity, restricting the scratching response without affecting other motor or behavioral aspects. They concluded that GRPR-containing neurons in the spinal cord were the ones projecting to the parabrachial nucleus, and they are essential to the itch sensation.

All these experiments helped them define the spinoparabrachial circuit’s role in the itch-scratch cycle. The even better news is that they achieved this reduction of scratching behavior in all types of itch models, suggesting that the spinoparabrachial pathway could be the common circuit in all kinds of itch-scratch cycles. The inhibition of those neurons in the parabrachial nucleus did not have any other side effects in emotional responses, behavior, motor activity or responses to other types of stimuli like temperature or pressure [4].

Several studies have shown promising results in treating the chronic itch in eczema (an inflammatory reaction of the skin that causes persistent itch and pain) patients by blocking specific receptors in sensory neurons [5, 6], and they have seen a substantial improvement in the itch sensation in other patients with non-inflammatory chronic itch [5].

These breakthroughs could open new venues for the treatment of chronic pruritus (itch), a condition that has been overlooked so far but has an enormous impact on the patient’s quality of life. It is hard to diagnose and it may seem irrelevant to a non-sufferer, but treatment for chronic pruritus could improve the quality of life of someone who’s already undergoing treatment for other diseases like cancer. Sometimes small improvements can make a huge difference in someone’s life.

← What’s the Deal with Migraines??!! Dopamine is NOT your brain’s reward chemical →