The Neurogenesis Saga: Are new neurons born in the adult human brain?

Posted by Seraphina Solders on May 3, 2018 in Developmental Neuroscience, learning, Memory | 1 Comment

One of neuroscience’s most heated debates during the past 50 years has been whether or not new neurons are born (a process called neurogenesis) in the adult mammalian brain. Before the late 1990s, we believed that we were born with all the neurons we would have throughout our lives. However, evidence of adult neurogenesis from the past 20-30 years has slowly accumulated, convincing scientists that new neurons are born in the hippocampus (a brain structure important for learning and memory). This finding has generated a lot of excitement in the scientific community, because understanding whether/how new neurons are formed in the brain is important for understanding how our brains change and adapt throughout life. Further, it suggests the possibility of harnessing the brain’s innate regenerative ability to improve therapeutics for various diseases such as schizophrenia and Alzheimer’s disease. Recently, research groups have also examined how various lifestyle factors (like exercise and stress) can affect rates of neurogenesis, offering people hope of boosting their brains’ regenerative capacity through small changes in their daily lives. There is even a TED talk titled “You Can Grow New Brain Cells. Here’s How.” Clearly, this field has a lot of promise for furthering our understanding of brain plasticity and its applications to human health. However, in a Nature paper published in March, Shawn Sorrells and colleagues (2018) report that, at least in humans, neurogenesis ends sometime in childhood. Once again flipping the narrative, this study has stirred up controversy.

Historical perspectives: Everything may die, nothing may be regenerated

It wasn’t until very recently that the process of neurogenesis in the adult mammalian brain became widely accepted in the neuroscience community. Toward the end of the nineteenth century, several main figures in the field held the idea that the adult brain was structurally constant. Santiago Ramón y Cajal, one of the pioneers of modern neuroscience, posited:

“Once the development was ended, the founts of growth and regeneration of the axons and dendrites dried up irrevocably. In the adult centers, the nerve paths are something fixed, ended, and immutable. Everything may die, nothing may be regenerated. It is for the science of the future to change, if possible, this harsh decree.”

Ramón y Cajal figured that because the structure of neurons is so complex and sophisticated, they couldn’t possibly continue to divide after maturity. Because of descriptions such as these, no one really considered that adult brains continued to generate new neurons.

Despite some scattered reports of postnatal neurogenesis in mammals, the field as a whole continued to dismiss the possibility of adult neurogenesis. One of the major obstacles in moving the debate forward was our limited technology. In the first half of the twentieth century, researchers studying neurogenesis were looking for signs of dividing cells. The main problem with this strategy was that even if we saw cells that showed signs of dividing, we couldn’t say with certainty whether these cells were neurons or glia (another major type of cell in our brains that provides nourishment and support for neurons). We know that some types of glia can continue dividing throughout our lives, but because our brains store our experiences and memories in the connections between our neurons, the birth of new glial cells isn’t as relevant for studying the ability of our brains to adapt and change with new experiences.

(for a description of the technological advancements and emerging evidence for adult neurogenesis over the twentieth century, see Gross 2000).

Death of a dogma: Neurogenesis in the adult human hippocampus

Starting in the 1990’s, the combination of two major technological developments finally allowed researchers to convincingly demonstrate neurogenesis in the adult brain. These were the introduction of a molecule called BrdU (Bromodeoxyuridine), and the use of cell-type specific markers.

BrdU is a synthetic analogue to thymidine, one of the main building blocks of DNA. Every time a cell divides, it has to make an entire new copy of all the DNA it contains. Because BrdU is so similar to thymidine, when BrdU is around a cell that is actively dividing, the growing DNA strand will incorporate a BrdU molecule instead of a thymidine molecule. Scientists can then detect which cells have been recently born by looking for traces of BrdU using antibodies that emit light when they bind to the molecule. 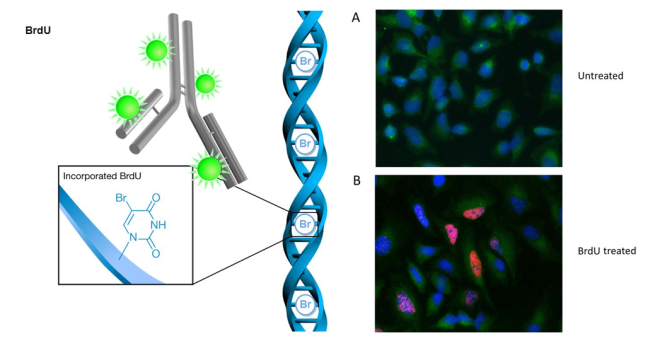 Importantly, BrdU labelling could be combined with cell-type specific markers, which are molecules that can bind to specific proteins on the surface of cell membranes. Because different types of cells have different types of proteins on their membranes, we can use markers to identify specific types of cells. For instance, there are markers that label neurons (but not glia), and more specifically, markers that label immature neurons (rather than mature neurons). Similar to BrdU labeling, we can then detect these markers using antibodies that will emit light when they bind.

Scientists began combining BrdU and neuronal marker labeling to show evidence for postnatal neurogenesis in various mammalian brains. However, we could not use this strategy in humans, because it is quite an invasive procedure. BrdU has to be injected into the bloodstream of the animal, and then the brain has to be removed and sliced to visualize the cells. In 1998, Fred Gage’s lab had a unique opportunity to apply these tools to humans; BrdU was administered to cancer patients to examine the proliferative activity of their tumor cells. Some of these patients consented to have their brains donated to research after their death. Gage’s lab examined these postmortem brains and, and using both BrdU and neuronal marker labeling, found evidence of neurogenesis in the hippocampus (Ericksson et al., 1998). This was the major turning point in the search for neurogenesis. Finally, nearly a century after Ramón y Cajal’s neuron doctrine was established, the claim that ‘new neurons are not added to the adult mammalian brain’ was no longer taken as truth.

Wait… Does neurogenesis end in childhood?

Last month, Sorrells et al. published a study that surprised even the authors. They looked at postmortem human brain tissue from the hippocampus of pre-term infants to older adults, and used specific cell-type markers for dividing cells and immature neurons. Importantly, they had a strict definition for immature cells; a cell had to express both DCX and PSA-NCAM, markers specific for immature neurons, in order to be counted as immature. This is a stringent requirement (most studies only use one or the other), but increases the likelihood that a labelled cell is truly immature. This is important, because the authors show that either marker on its own can be un-specific (i.e. mark what it isn’t supposed to…like glia, or mature neurons).

First, to make sure their methods were even valid to detect neurogenesis, the authors examined fetal brains, and found plenty of evidence for new cells. They then examined the brains of subjects who died in infancy, early childhood, and adolescence. The oldest brain that showed signs of new neurons was from a 13 year-old, suggesting that neurogenesis ends before adulthood.

The number of young neurons declines in the human DG from infancy into childhood. (Sorrells et al., 2018)

Next, the authors wanted to make sure that their inability to find evidence of new cells in these older brains wasn’t due to the degeneration of the brain between the time of death and when the brain was preserved. To do this, they took over a dozen brain tissue samples from epilepsy patients who had to have brain tissue removed during surgery. They also had two postmortem brains that were preserved almost immediately after death. Still, they were not able to find evidence of neurogenesis in the hippocampi of these older brains.

So, why is this study gaining so much attention? It has many strengths compared to previous research. First, they examine brains spanning from pre-term to later adulthood; the fact that they show neurogenesis in younger brains proves that the methods they use in the older brains are really capable of finding new cells. Second, they collected brain samples from labs around the world, from people with diverse causes of death, to make sure the brains they were looking at were as representative as possible. This minimizes the likelihood that something about the patient’s history before death, the cause of death, or the way the brains were collected and preserved affected their results. Finally, in addition to examining postmortem brain tissue, they also looked at tissue samples taken from intraoperative epilepsy patients and from patients immediately after death to minimize the possibility that the quality of the tissue was degraded between the time of death and the time the brains were preserved.

Overall, this is a thorough, high-quality study that has addressed a lot of pitfalls from previous research. Nonetheless, if we’ve learned anything from the history of neurogenesis research, we shouldn’t take any single study as definitive proof for the existence or non-existence of a phenomenon. This study has raised the bar for researchers around the world to provide more convincing evidence for neurogenesis.

The future of the neurogenesis saga

So, is all hope for neurogenesis research lost? Probably not. Sorrells and colleagues have not proven that neurogenesis does not occur in adult brains (it’s virtually impossible to prove that a phenomenon doesn’t occur). Critics have pointed out that their restrictive criteria for labelling immature neurons may have led to false negative results (meaning that some legitimately immature neurons may not have been labelled by both markers). Further, the fact that they see ample evidence of neurogenesis in the young brains, but no evidence in the older brains, might suggest that if neurogenesis does occur in adulthood, it may be happening at lower levels than previously thought.

But if neurogenesis does end in childhood, what does that mean for our understanding of brain adaptability, and learning and memory throughout adulthood? The authors speculate that a lack of adult neurogenesis might actually be part of what makes us human. They compare their results to findings from other mammals with similarly complex brains and behavior:

“Interestingly, a lack of neurogenesis in the hippocampus has been suggested for aquatic mammals (dolphins, porpoises and whales), species known for their large brains, longevity and complex behaviour.”

Perhaps the lack of adult neurogenesis may help us better understand what makes our brains different from those of other mammals. We know our brains are adaptable and capable of learning throughout our lives. If neurogenesis isn’t the key player in this adaptability, this leaves us with plenty of other possibilities to explore.

Regardless, there is still much to learn from studying neurogenesis in early development. Many diseases, such as schizophrenia and Alzheimer’s disease, have been shown to display aberrations in the hippocampus early in life; therefore, even neurons generated in childhood may play a role in human disease. All in all, the neurogenesis saga is not complete.