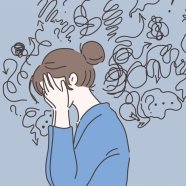 Many of us know how it feels; our heart rate increases, our minds race, our palms get sweaty. Maybe it’s before giving a speech or taking a big exam. Maybe it’s because we have so many work deadlines that we’re convinced our bosses think we don’t sleep. Anxiety is an incredibly common emotion as well as a physiological response, especially in today’s climate (a topic for another day…), but when does it go from an emotion to a mental health disorder? According to the National Institute of Mental Health and the Anxiety and Depression Association of America, anxiety disorders are when the emotion of anxiety becomes persistent and feels uncontrollable and overwhelming [1, 2]. In these cases, anxiety can become disabling and interfere with daily activities, like work or maintaining relationships. Or especially interfering with just trying to unwind, which many of us can understand. There are many branches of anxiety disorders, including social anxiety, phobia-related disorders, and panic disorders to name a few. Then, of course, there’s Generalized Anxiety Disorder (GAD), which will be the focus of this piece. GAD is defined in the Diagnostic and Statistical Manual of Mental Disorders (DSM-5)—the  handbook used by healthcare professionals to compare symptoms experienced by the patient and determine a diagnosis—by  excessive anxiety or worry occurring most days for at least 6 months, difficulty controlling worry, restlessness or feeling on edge, being easily fatigued, difficulty concentrating, irritability, muscle tension, sleep disturbance, and disturbance to daily life [4]. Basically, the emotion of anxiety is almost always around and because of that, it becomes difficult to function. It becomes virtually impossible to do any day-to-day task. Life becomes entirely too much.

Is anxiety on the rise?

As it stands, anxiety disorders are considered the most common mental illness, affecting 40 million adults (1-in-5) in the US and affecting 300 million globally. GAD specifically affects 6.8 million adults, just over 3% of the US population, at any given time [1, 5]. General opinion seems to be that anxiety is on the rise, but studies are not able to come to a solid conclusion on this one way or another, primarily because anxiety rates over time are a surprisingly difficult metric to properly capture [7]. In actuality, anxiety is thought to have been previously underreported, but now with mental health treatment becoming more commonplace, those who were previously unable to get support are now able to.

Interestingly, rates of GAD are much higher in high-income countries than low- or middle-income countries. According to a study published in 2017, GAD is estimated at 5.0% in high-income countries compared to 1.6% and 2.8% in low- and middle-income countries, respectively [6]. Does this even make sense? There is typically bias in lower income areas due to unaffordable treatment and limited access as well as a general mistrust around medical professionals. Some researchers also think the higher levels of anxiety in high-income areas could be because anxiety becomes a disorder when it’s considered irrational, so worrying about how to afford a place to live or your next meal is not considered irrational because those things can be life or death, which gets into why we have anxiety in the first place.

Why do we have anxiety?

Humans (and mammals in general) evolved to have anxiety as a fight-or-flight mechanism. Stress and anxiety light a fire under our bums to help us survive in the face of danger [8]. Let’s say you are a hunter back in the day. If a tiger appeared, you would feel stressed, then you would (hopefully) run away. If you are hungry, you feel anxious and tired, so you go get food (or at least try to). In each case you would either succeed in overcoming these dangers and your anxiety is relieved or you would die. Now, it’s not that straightforward. Society has evolved to the point where many of us are lucky enough to not have to worry about these survival pressures due to a relative abundance of food, water, and shelter. And there generally aren’t generally tigers wandering the streets of San Diego. So, as a result, the gaze has moved away from survival towards success and has shifted inward. Instead of worrying about tigers, many people worry more about jobs, money, relationships, and self-fulfillment. These things don’t instantly get resolved one way or another, so the anxiety becomes more chronic, which our body and mind are not equipped to deal with.

What’s going on in our brains?

Studies are still ongoing to determine the exact cause of GAD, and they also look at multiple scales, from studying brain regions to specific molecular changes. The main brain region associated with anxiety is the amygdala, which is one of two small almond-shaped structure in the brain located deep towards the middle of the brain. It is part of the limbic system, which is a set of brain structures associated with emotion and memory as well as the “four F’s” of survival: fighting, fleeing, feeding, and reproduction. The amygdala specifically is associated with emotional responses, including fear, anxiety, and aggression, as well as memory and decision-making. Knowing this, it makes sense that GAD has been linked to disruption of the amygdala and its emotional processing. When patients were prompted with some kind of stimulus expected to give an emotional response, such as a picture or song, the amygdala was overactive in those that were diagnosed with GAD compared to control [8, 9, 10]. Interestingly, the right amygdala had a stronger response to negative emotions than the left. Studies have also found dysregulated connectivity between the amygdala and other areas of the brain, suggesting propagation of these changes in emotional processing to other regions [9].

There have also been some studies that find a decreased amount of free serotonin, which is another neurotransmitter, but this has been found to be a stronger indicator of other disorders, such as Major Depressive Disorder. This reflects the fast that GAD is often present in patients at the same time as these other disorders, so it becomes difficult to discern cause and effect. Selective serotonin reuptake inhibitors (SSRIs) are another class of medication that are typically used as antidepressants but have been shown to be effective in some cases for anxiety disorders. They work by slowing down the reuptake of serotonin by neurons, or brain cells, to allow for increased free serotonin in the brain [9].

What do we do about it?

Anxiety disorders are clearly highly prevalent in our society today, and research is still ongoing on the exact nature of them as well as how to best treat it. As discussed, there are different medication options available, but they have been shown in some cases to be equally effective in treating anxiety as cognitive behavioral therapy [11]. Ideally, a patient can utilize a combination of the two [12]. There is also a push now for changes in lifestyle factor, such as exercise, sleep hygiene, diet, and meditation, which have all been show to help with anxiety levels [13]. Today, there are many options for those with anxiety disorders to get help, and as researchers, we can only hope there will be more tomorrow.

[4] Impact of the DSM-IV to DSM-5 changes on the national survey on drug use and health. Substance Abuse and Mental Health Services Administration (2016)

← The 2020 Time Vortex and other Tales of Perception Why do we get hangry? →