For such a natural part of being a human, breastfeeding has had a controversial past whether in private or in public- in fact, it only became legal to breastfeed in public in all 50 states in 2018, when Utah and Idaho were the last to legalize it. While this trend of normalizing breastfeeding seems recent, breastfeeding has historically waxed and waned globally in popularity several times. However, now we have the scientific capacity to look into the impacts of development due to the nutritional benefits and unique composition of breastmilk. Hopefully this time around, breastfeeding isn’t just a trend, but rather is here to stay.

It’s unclear for how long someone “should” breastfeed, but luckily we have our human and non-human ancestors to help us pinpoint this number. Fossilized teeth from ancient humans have shown that 6 million years ago, our pre-human ancestors, Australopithecus africanus, breastfed for up to 6 years [1]. Our closest non-human relative, the chimpanzee, breastfeeds for about 5 years- in fact, humans breastfeed for one of the shortest durations compared to other primates. But don’t worry, this is not to say that we all should start breastfeeding for 5-6 years. The American Academy of Pediatrics recommends babies breastfeed exclusively for the first 6 months, while the World Health Organization suggests breastfeeding for at least two years. 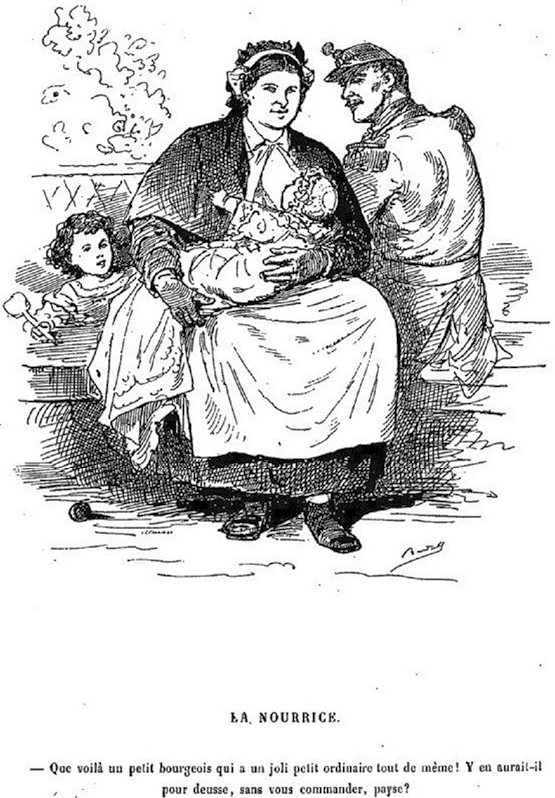 The historical trends and perceptions towards breastfeeding are fascinating. In Greek mythology, breastfeeding was revered. It was Hera’s breast milk that made Hercules so strong and also formed the Milky Way we see at night. However, breast-shaped lay bottles dating back to 3500 BC lead some historians to believe that cows and goats were sometimes acting as milk substitutes for human infants. Feeding babies other animals’ milk fell out of favor around the 18th century when people eventually learned that babies can suffer from greater rates of diarrhea. Alongside looking for human milk substitutes, there is a long history dating back to ancient times of proxy milk givers, wet-nurses, ie other women nursing a mother’s child. Wet nurses have been around since ancient times and at one point were so popular that there were advertisements and businesses competing with each other in 16th century England. This trend started in the upper classes but became so popular that by the 1600s, over half of all European women sent their babies to a wet nurse. It was estimated that in 1790 in Paris, not even 10% of babies were nursed by their own mothers! Of course, by the early 1800s, the trend swung back the other way and it became illegal in some countries to not breastfeed your own baby (ref). However, with the advent of safe formula, breastfeeding fell out of popularity again. Modern formulas hit the market and became popular around the 1960s. Since formula was seen as an efficient and modern way to feed a baby, by the early 1970s in the US, only 22% of mothers breastfed and usually only the first few weeks of life. Currently, in the US, breastfeeding is back on the rise. In 2020, 84% of babies were breastfed with 57% being breastfed up to 6 months [2]. Despite its controversial and wavering past, history and research show that breast is in fact best. What makes breast milk so special and how does it contribute to the health of newborns?

To the Chem Lab!

Human breast milk is distinct from both formula and other animal milks, like cow and goat, in its chemical components. For example, breast milk is a substance complete not only with a ratio of sugar and fat that is different from other animals’ milk, but also alive. Mothers pass on white blood cells to their babies alongside complete proteins, vitamins and minerals, amino acids, antibodies, and enzymes that can’t be passed on by giving babies other animals milk or formula. When babies are sick, mothers actually ramp up the white blood cell production in their breast milk that they share with their babies [3]. Formula does not contain these things that help babies’ immune systems and help them fight off diseases and allergies. Formula does also contain carbohydrates- usually from corn, and fats- derived from palm and soybean oils. However, breast milk fats are more easily digested by human infants [4]. Even though formula can keep your babies well-fed and healthy, breast milk contains extra ingredients that help babies later in life.

Breast milk (top) versus formula (bottom) under a microscope. Additionally, looking at it live shows how

And What About the Baby Brains?

What kind of effects can nutrition have on the development of infants? Human milk contains certain ingredients that are important for the creation of new synaptic connections between neurons. Studies have shown that there is a difference in the brains of babies fed with breastmilk and those fed with formula. Scientists at Brown University showed that babies who are breastfed for at least three months have enhanced development in key parts of their brains by age two compared to children who were fed exclusively formula or a combination of formula and breastmilk [5]. Specifically, these toddlers’ brains had more white matter in various brain regions related to higher cognition. White matter indicates the amount of myelin, a material that insulates neuron fibers which helps neurons send signals more efficiently. A large study of over 8000 9-year-old Irish children showed that controlling for other external factors like socioeconomic status, children who were breastfed scored higher on average on various standardized tests than children who were never breastfed [6]. Thus, evidence shows that there can be many benefits to a baby’s brain on breast milk.

However, this research may not be so clearcut. Other studies have shown that these effects only last for so long with the benefits disappearing around age 8. Some studies are also fraught with confounding variables- mothers that are more likely to breastfeed are also more likely to have other resources available to them. Others say that these effects are actually caused by other things like maternal IQ, socioeconomic status, and maternal education. Thus, while breast milk may aid the development of babies’ brains, it is unclear on the lasting effects of breast milk on measurements like IQ. However, this field could certainly benefit from having more people researching these questions. The science behind breastmilk is largely unknown and there could be many promising effects to be learned.

Another field that has been researched besides brain development is breast milk’s effects on the immune system. Breastfed infants are passed along white blood cells and antibodies from their mother at concentrations and compositions that can change daily depending on the baby’s health [7]. Furthermore, breastmilk can build a microbiome in babies by passing along both the mother’s bacteria and probiotics [8]. Research has shown that breastfed infants have a lower incidence of infections and diseases, especially in the developing world. There is also evidence that breastfeeding protects infants from diseases at older ages too, including allergies, childhood leukemia, and obesity. Research has yet to reveal biological mechanisms behind breast milk’s effects, but researchers’ dollars are beginning to fund this important and exciting field. Even here at UCSD, there is an institute at the medical school called the Mother-Milk-Infant Center of Research Excellence that is researching the positive health effects of breast milk and potentially looking for a way to leverage its benefits for people at all stages of life- not just babies.

The benefits don’t just end at the baby –  mothers can also benefit from breastfeeding. Breastfeeding can (but not always) halt ovarian cycles, thus lowering risks for both ovarian and breast cancer [9]. Research has also shown that it can alleviate postpartum depression; however, some scientists are still skeptical. Breastfeeding can also stimulate the uterus to contract and return to normal size and lessen the chances of anemia and osteoporosis. Emotionally, breastfeeding can support mothers by producing hormones like oxytocin and prolactin which both soothe and strengthen bonding between mother and the baby. Since these hormone levels increase in both the mom and baby, babies are also soothed and may cry less.

When breast is not best

While it is recommended that women opt for breastfeeding, there are a plethora of valid reasons why a mother may choose to opt out. Breastfeeding is free only if you don’t count how much time it can take away from working mothers. There is a serious time investment that goes into breastfeeding. Some women feel uncomfortable breastfeeding if they are on prescription drugs, like antidepressants, since they do not want to potentially pass those to their infant through breast milk. Some women experience great discomfort while breastfeeding even with the help of lactation consultants. Those with HIV/AIDS or who are going through chemotherapy should not breastfeed. For women who wish to use breast milk, but for whatever reason, cannot use their own, there are often donor banks for breast milk at hospitals. There can also be many other valid reasons for a woman to choose not to breastfeed, thus it is important to normalize breastfeeding while also not shaming women who choose to not do so themselves.

← COVID-19 on the brain Mal de Débarquement: The Science of Land Sickness →