In the 1920s, Jakob von Uexküll (the theorist responsible for the notion of umwelt) described the sensory-motor cycle through which an animal modifies the environment, thereby modifying its own perception of the environment, which leads to further action upon the environment, and so forth, until a particular goal is achieved (Fig. 1a).   In the primitive animal, this cycle is circular, with limited internal feedback from motor efferents to sensory receptors (Fig. 1b).  In higher animals, however, there is much more feedback within the organism at various levels of perception and action.  The primitive sensory-motor cycle has therefore been replaced, through the work of such figures as William James and Roger Sperry (see “Common coding theory“), by a perception-action (PA) cycle, which includes more phylogenetically and ontogenetically advanced structures, including the prefrontal cortex (Fig. 1c). 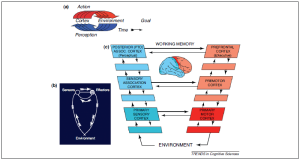 Figure 1. The perception/action cycle. (a) Basic diagram of the PA cycle toward a goal through cortex and environment. (b) Basic diagram of the sensory-motor cycle from Von Uexküll [58], with the internal nervous feedback from efferents to sensors. (c) General view of the connective framework of the PA cycle in the primate cortex. Blank rectangles stand for subareas or intermediate areas. Arrows indicate direction of anatomically verified connections. Large arrows, running clockwise, constitute the major functional processing links of the cycle through the perceptual and executive cognitive hierarchies. Smaller arrows, counterclockwise, constitute internal cortico-cortical feedback. Feed-forward and feedback reentry between prefrontal and posterior association cortex (PTO, parietal-temporal-occipital), at the top of the cycle, engage those cortices in integrative cognitive functions, such as the maintenance of WM. (From Fuster & Bressler, 2012)

Dr. Joaquín Fuster has expanded upon the idea of the PA cycle, proposing that the cycle is physically formed via the connection of what he calls “cognits.”  Cognits are interacting and overlapping networks of synaptically-associated cortical neurons that represent units of memory or knowledge.  Following Hebbian principles, cognits are assembled during learning via temporally coinciding synaptic events and are weakened with disuse.  In Fuster’s theory, however, cognits can be formed after just a single event and modified by a single new sensory input.  A single neuron, activated by various experiences, may be incorporated into several cognits and reactivated for many memories.

Cognits are arranged hierarchically, separated by the perceptual-action divide (physically, the central sulcus, or “Rolandic fissure”), with the highest executive and perceptual cognits in the prefrontal cortex (PFC) and posterior association cortices (e.g., the inferotemporal cortex associated with the perception of faces), respectively.  Figure 2, shows the hierarchical organization of cognits.  The overlapping triangles represent the initially divergent sensory inputs and motor outputs (at the lower cognits), which converge at the higher levels of cortex.  Long- and short-term memories, Fuster theorizes, are contained within these cognit networks.  Each new memory follows the hierarchical gradient upward and becomes associated and integrated with concurrent stimuli and pre-existing memories at the higher levels.  Each network, once formed, can be entered from any point in the hierarchy. 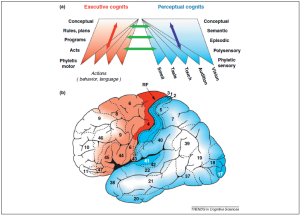 Figure 2. Hierarchical organization of cognits in the cerebral cortex. Perceptual cognits are organized hierarchically between primary sensory areas (blue) and posterior association cortex (white) by order of category of perceptual memory, from phyletic sensory memory (sensory cortex) at the bottom to conceptual perceptual knowledge at the top. Executive cognits are organized hierarchically between primary motor cortex (red) and prefrontal cortex (white) by order of category of executive memories, from phyletic motor memory (motor cortex) at the bottom to conceptual executive knowledge at the top. (a) Schematic hierarchical order of perceptual and executive cognits. Bidirectional arrows indicate cortico-cortical connectivity: perceptual (dark blue), executive (red), and perceptual-executive (green). The inverted triangles symbolize the divergence of connections and increased size of cognits with ascending hierarchical order. (b) Lateral view of the left hemisphere, areas numbered according to Brodmann’s cytoarchitectonic map (RF: Rolandic fissure). Both panels adapted, with permission, from Fuster, 2001. (From Fuster & Bressler, 2012).

But what happens when the PA cycle is disrupted?  What if the sensory input starts the cycle but the consequential action cannot be completed as the immediate output?  This has been a highlight of Dr. Fuster’s interest for over the past decade (see Fuster, 2001; Fuster, 2004; and Fuster & Bressler, 2012 to start!).  Fuster argues that working memory (WM) bridges the temporal gap in the cycle, holding information online for prospective use.

The question of WM storage (how? what? where?) has puzzled neuroscientists for decades.  Some have held the belief, rooted in disproved phrenologies, that the functions and contents of cognition (i.e., memory, perception, and the items of memory or knowledge) are stored  in discrete, dedicated regions of the brain.  According to this view, the function of WM is stored in the PFC and the items of WM, coordinated by the PFC, are stored separately.

Fuster argues instead that working memories share the same structure as the long-term memories to which they refer.  Working memory is, in fact, the temporary reactivation of the long-term memories, held in the cognits of the perceptual and executive hierachies of cortex.  The perceptual cognits are activated by the same stimulus or even a portion of a stimulus related to the memory.  The executive cognits that are activated by the perceptual memories represent the prospective action that will occur after the delay.  The PFC is the necessary physical connection between the executive and perceptual cognits.  The mechanism by which the working memory is maintained remains unknown, but Fuster proposes that the information is linked over a delay by the phase synchronization of the oscillatory excitation of the nodes forming the network.  It will be interesting to hear how his theory has evolved with the accumulation of information from EEG, imaging, electrophysiological, and other studies from his lab and others.

For over 50 years, Fuster has been a man of many firsts in neuroscience–developing one of the first microelectrode methods for single unit recordings in 1958, obtaining the first intracellular cortical recordings in the 1960s, describing the first “memory cells” in the primate brain in 1971, and much more.  (I highly encourage you to read his impressive biography!)  Today, a resident fellow of the American Academy of Arts and Sciences, elected Member of Honor of the Spanish Royal Academy of Medicine, recipient of the 2006 Patricia Goldman-Rakic Prize for Outstanding Achievement in Cognitive Research, and deliverer of the 2010 Segerfalk Lecture (again, the list goes on), he continues to be an influential force in the cognitive neuroscience community.

It is an honor to have Dr. Joaquín Fuster give our Founder’s Lecture this coming Tuesday.  Please join us–if not for a fantastic talk on cognits and the PA cycle then for a unique historical opportunity and a delightful Spanish accent–on October 2, 2012 at 4:00pm in the large conference room of the Center for Neural Circuits and Behavior at UCSD.

← Forming Functional Synapses Noise vs song, how are naturalistic stimuli processed in the brain? →